What will Ford’s first speech say after he 'looks at the books'? Folks, we have a pretty good guess.

'Friends, I stand before you today to share some difficult news' 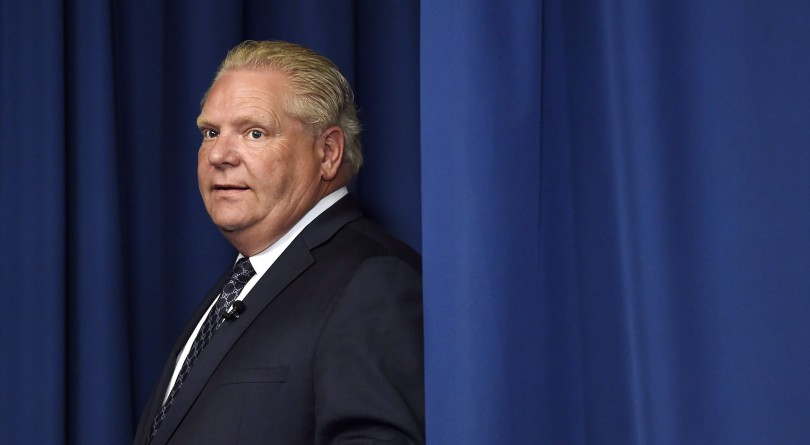 Ontario Progressive Conservative Leader Doug Ford arrives as he holds a press conference in Toronto on Thursday, May 10, 2018. THE CANADIAN PRESS/Nathan Denette

The day after winning a sizeable majority in the Ontario election, Premier-designate Doug Ford began to lay the groundwork for that time-honoured tactic deployed by all new governments: blame the old bunch for why you can’t live up to your election promises.

Speaking to reporters on Friday, he reiterated some of his campaign promises to cut taxes, cut hydro bills and cut hospital wait times. Then he was asked what his first act as premier would be. “First we have to look at the books,” he said. “We have to see the financial situation that’s been left behind.”

And so begins the countdown to Ford’s future pronouncement that he’s shocked, shocked, to discover what the Liberals were hiding about the true size of the deficit.

READ: How Doug Ford did it

If Ford does deliver that speech, it’s not all that hard to predict what he will say. In fact, let’s try to do just that.

Here is a draft of a speech similar to what Ford might make after he gets a “look at the books.” It’s inspired by speeches and comments from the two masters of that political tactic in Ontario—former PC premier Mike Harris (and his finance minister Ernie Eves) after they took over from Bob Rae’s NDP government in 1995, and former Liberal premier Dalton McGuinty (and Greg Sorbara, his finance chief) after beating Eves’s PCs in 2003.

Friends, I stand before you today to share some difficult news. We campaigned on a promise to dig Ontario out of the debt piled up by the Liberals. But the situation is far worse than we could have ever imagined.

It seems that every single day we discover another mess. It doesn’t seem to matter what kind of a rock we look under—we find another mess left to us by the previous Liberal government.

Ontario’s finances are certainly worse than the projections presented in March when the Liberals delivered their election budget. They promised a massive increase in the deficit that would pile even more debt onto the backs of the people of Ontario. Well folks, that wasn’t the half of it. Never has any provincial budget so inaccurately represented the state of the government’s finances.

I mean what happened to the truth here?

After years of the Liberals cooking the books, the hard-working people of Ontario now have a clear and unvarnished understanding of our fiscal situation.

And that means we have difficult decisions that need to be made.

The realization of just how much worse Ontario’s fiscal situation was under the Liberals is going to present some very serious challenges for us.

Folks, the time for honesty is now. During the campaign we said we would go line-by-line through the government’s books with the help of an independent auditor to find $6 billion in efficiencies. We also promised that no jobs would be lost.

The simple truth is that this new information changes that. The cuts we were envisioning won’t be enough to put Ontario on sound fiscal footing now that we know how much the Liberals were cooking the books. This could mean there are deeper cuts needed because of the unforgiving nature of the fiscal agenda. That’s one of the options that we have to look at. This means gut-wrenching changes both inside and outside government.

We’re going to consider some ideas which, to this point of time, might have been on the list of the unmentionables, those things that might be unthinkable.

Cutting the amount of money the government spends is obviously going to have to take place sooner and be deeper than any of us predicted or campaigned on in the election. We are looking at the downsizing of the civil service sooner rather than later. We haven’t ruled out this summer.

All expenditures, including subway lines, are on the table and they all have to be looked at.

Folks, the spending crisis our government inherited means that no other course of action is possible. There will be tough choices and difficult decisions to face. This is the road we must take if the people of Ontario are to prosper.

We are going to do what needs doing.