Stephen Maher: The lawsuits are piling up after a series of rash decisions and ham-handed moves. Expect plenty more liabilities the province can ill afford. 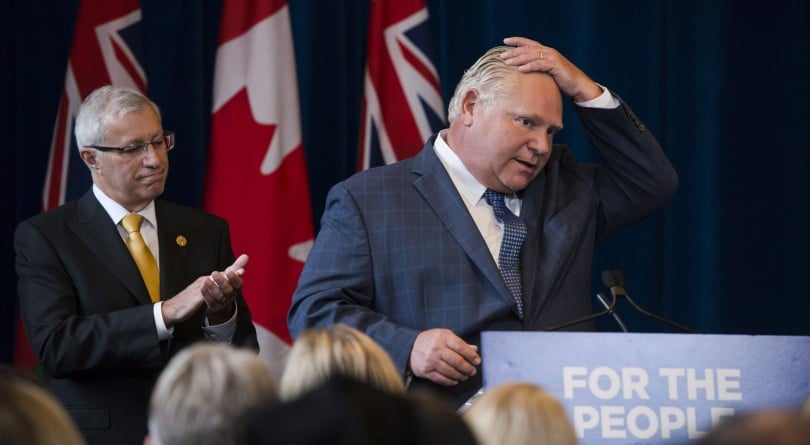 Premier Doug Ford speaks to members of his caucus in Toronto on Monday, Sept. 24, 2018. (THE CANADIAN PRESS/Christopher Katsarov)

In an interview in Washington last week, Ontario Premier Doug Ford seemed surprised and hurt by the number of lawsuits his government faces.

“I think we have 10 or 11 lawsuits active, unprecedented for a new government to take office, and a lot of the oppositions, they believe they want to rule through the judiciary system,” he said. “We live in a democracy. We just had an election. June 7. They voted us in. And we’re going to fulfill the mandate that was given to us. It’s in the Constitution.”

I hope Ford is smarter than he looks but I am afraid he is not, and that could cost Ontarians piles and piles of money.

Ford’s party did win an election on June 7, but that didn’t make the province’s complicated business arrangements all disappear, and although Ford seems to think he can undo contracts by fiat, unelected judges will have the final say, and they don’t care what nonsense he spouted in an election campaign.

A lot of the potential legal trouble stems from Ford’s ham-handed attempts to cut hydro rates, which is more difficult than promising to cut them.

In the campaign, for no good reason, he promised to fire the board and CEO of Hydro One. When he forced them out, he promised that they would get no severance, which is nonsense.

He also promised to get rid of Ontario’s carbon cap-and-trade system, which was established by Kathleen Wynne in 2016 to reduce greenhouse gas emissions. The system required polluters to buy credits and allowed them to buy and sell them to encourage companies to cut emissions.

READ MORE: The path to a one-term Doug Ford

Ford had denounced the “cap-and-trade carbon tax slush fund,” and, once he became premier, tabled an act to immediately kill the program, which may lead to big lawsuits from companies that bought now-worthless carbon permits.

The way the Tories rolled this out suggests they may not have considered the legal liabilities carefully enough.

Greenpeace and EcoJustice filed a lawsuit, pointing out that the Environmental Bill of Rights requires 30 days of public consultation before passing such a law. Lawyers for the province responded with a novel argument: the public consultation isn’t necessary because the people of Ontario had just been through an election campaign.

The province agreed to suspend the bill at second reading until the public consultation is completed, but it sure looks like Ford tabled a bill without consulting the expert lawyers we pay to counsel him.

I’d like to know if those lawyers signed off on the cancellation of the White Pines wind project in Prince Edward County. Energy Minister Greg Rickford passed a bill that nullifies the contract Ontario had signed with the German company behind the almost-finished $100-million project. The bill prevents the company from suing, and allows the province to negotiate a settlement, but if those negotiations fail, Germany could seek redress through the World Trade Organization.

This banana-republic-style move has damaged Ontario’s reputation among international investors, undercutting Ford’s boast that Ontario is open for business, and it means that Ontarians will once again end up digging deep to pay for an energy project that won’t get built.

It won’t cost as much as Dalton McGuinty’s cancelled gas plants, and there is no reason to believe anyone will go to jail, but it is similar in that politicians are interfering with electricity generation for partisan reasons, and we will have to pay.

Goodness knows how much we will have to pay for the cancellation of 758 renewable electricity contracts, or for the government’s failed and arbitrary effort to exclude Tesla from an electric-car subsidy program.

Ford seems ill-suited to the methodical, lawyerly business of public administration, and that has led to an unknown and expanding number of lawsuits, for which everyone in Ontario is ultimately liable.

After 15 years of free-spending Liberals in power, it was time for Ontario to tighten its belt and pay more attention to the provincial balance sheet.

Ford has a mandate to do that but it is not clear that he has the capacity.

Whatever his youthful experience as an entrepreneur might have taught him, it is not clear that it led to business acumen or a proper respect for contract law.

There was no sign that he consulted with his attorney general, Caroline Mulroney, before his foolish threat to use the notwithstanding clause in his legal dispute with Toronto, which is weird and worrying. In a way, her appointment as attorney general is worrying. She is a novice politician and has never practiced law in Canada, and can’t be expected to rein in Ford.

If he continues to act like a bull in a china shop, like someone who believes his own boasts and political falsehoods, he is going to pile up liabilities the province can ill afford.

He needs to listen to his lawyers. The experienced politicians in his cabinet and the seasoned officials in his office need to tell him that, and if he won’t listen, walk away with their reputations intact.