What wouldn't Erin O'Toole do to win?

Stephen Maher: Erin O'Toole is a well-respected, serious and thoughtful politician. But that's not what will win over the Conservative base. 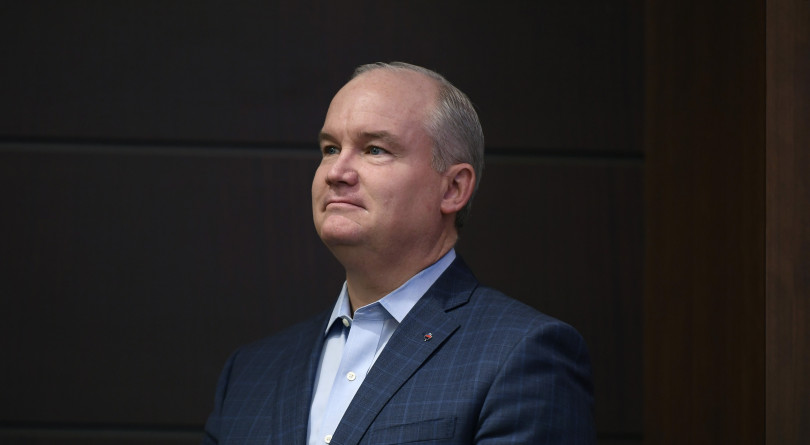 O'Toole listens during the Conservative caucus retreat on Parliament Hill in Ottawa, on Jan. 24, 2020 (CP/Justin Tang)

Erin O’Toole put out a Facebook meme this week with a picture of himself gazing firmly into the distance, with this text superimposed: “I’m not the media’s candidate. I’m not going to go Liberal-light to earn the fake approval of the press gallery. Add your name if you’re with me.”

This message is so disconnected from reality—so transparently false—that it made me think of the old H.L. Mencken line: “A professional politician is a professionally dishonorable man. In order to get anywhere near high office he has to make so many compromises and submit to so many humiliations that he becomes indistinguishable from a streetwalker.”

I wouldn’t dream of asking, as Conservative MP Arnold Viersen asked NDP MP Laurel Collins last week, if Mr. O’Toole has ever considered taking up sex work, but I do wonder what he wouldn’t do to gain an edge in his uphill battle for the leadership of the Conservative Party of Canada.

His meme is a false come-on, premised on nonsense, the idea that journalists are ganging up to anoint Peter MacKay, because we love red Tories. What codswallop. Erin O’Toole is a press gallery darling. He doesn’t have to get our fake approval. He has the real thing.

Since he was first elected in 2012, O’Toole has distinguished himself as a serious-minded parliamentarian, an earnest advocate for small-c conservatism, carrying himself with something like dignity, making good-faith arguments, always playing the puck and never the man. He knows his files, doesn’t take cheap shots, doesn’t give in to the temptation to strengthen a weak argument by smearing passers-by.

Also, he seems to understand that it is still possible to do important things in the House of Commons, that politics is about something more than who gets the most Facebook likes.

Before he launched his leadership campaign, for example, he forced the Liberals to set up a special committee to study our relationship with China, which led to useful scrutiny of our new ambassador to that country, which the gallery got a lot of stories out of, which, by the way, is the best way to get our real approval.

O’Toole knows this. What he is doing is bulls–ting dimwitted Conservatives, because that’s the only way he might win.

Peter MacKay is likely going to win the Conservative leadership in June. MacKay’s name recognition is excellent, his campaign has lots of money and he communicates very well, at least when he doesn’t screw up. But he does screw up from time to time. And remember that at this point in the last leadership race, a loudmouth wine salesman named Kevin O’Leary was ahead.

So O’Toole has a shot, but to win he needs to convince Tories that he, not MacKay, is the real conservative, so expect him to keep spreading manure.

I have been watching both guys for years and if there is an ideological difference between them, it has escaped my attention. They are both in the mainstream of the party, blue Tories, a shade to the left of Stephen Harper, about where Jim Flaherty hung his hat. They both want lower taxes and bigger pipelines. They both support the troops. They both want to lock up criminals and people protesting pipelines.

But forget real O’Toole and check out online O’Toole and you’d think that he was all identity, all the time. It’s baloney, but if he wants to win this thing, he has to play to the base, and the base of the Conservative Party of Canada—the people who make donations and vote in leadership elections—are extremely conservative.

As Jean Charest recently figured out, this is not the broad coalition that Brian Mulroney put together in 1984, not an ideologically disparate group united chiefly by its desire to turf the corrupt Liberal operators and replace them with corrupt Conservative operators.

Canadian politics have become much more ideological and identitarian in the last 30 years, paralleling a similar shift in the United States.

Our political parties are smaller tents than they used to be, the result of a process of sorting and polarization that has been accelerated by social media, usefully described in Ezra Klein’s new book Why We’re Polarized.

The polarization has made our politics less mushy—voters can make a real choice on policy questions at the ballot box now—but it has also made political communication increasingly emotional, focused on identity, which puts harsh messages at the heart of every public discussion, because that is what captures the attention of people who might be convinced to vote, share a meme, or—and this part is very important—type in their credit card number.

Our political parties used to be much mushier on key policy issues, like the environment, for example. Richard Nixon passed the Clean Air Act. Mulroney pushed for an acid-rain treaty.

It’s impossible now to imagine the Republicans or the Conservatives proposing those kinds of environmental policies. Pollution has been weaponized.

And the same thing has happened on the other side of the divide. The Liberal Party of Canada used to be a comfortable home for hunters and pro-life Canadians. Trudeau regularly promises to get tough on gun owners, and has driven out pro-lifers and cut summer job grants to summer camps who won’t endorse the Liberal view on abortion.

Political participation used to have a lot to do with who you knew, through your family, your service organization, your church or your broomball team. Now it is much more ideological, and the party is full of people who have who fallen under the sway of the dead-eyed hacks who write party fund-raising appeals.

The Conservative Party of Canada got good at this before the other parties, back when Stephen Harper’s meme monkeys made a cartoon puffin defecate on Stephane Dion’s head. After 20 years of this, the party is full of people who liked it enough to sign up for more. A lot of them are angry old grumps who log into Facebook to share MS Paint graphics that prove that sunspots cause climate change: retired mining engineers who can’t believe that Justine Trudope is prime minister of Soviet Canuckistan.

I’m not talking about Conservative supporters, who have lots of good reasons to support their party, but members, whose support O’Toole needs if he wants to win, which he wants badly enough that he appears willing to cast aside his dignity by tarting himself up as a culture warrior.

Politics is not a business for the faint of heart.