When he exonerated six Tsilhqot’in war chiefs, the Prime Minister recognized our truth

Opinion: Chief Joe Alphonse of the Tsilhqot’in national government explains what Justin Trudeau's exoneration of the six war chiefs hanged in 1864 meant to his people 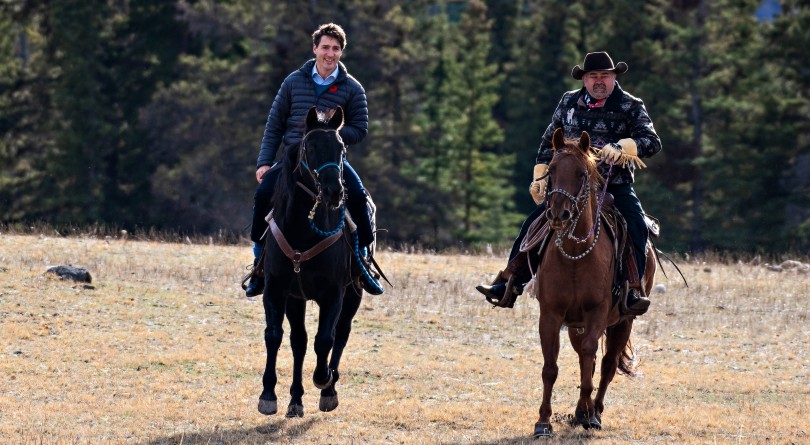 Chief Joe Alphonse is the tribal chair of the Tsilhqot’in national government.

On Mar. 26, 2018, in the House of Commons, the government of Canada exonerated our six Tsilhqot’in war chiefs of any crime or wrongdoing during the Chilcotin War of 1864. But the real exoneration event was yet to come—always planned to be held on our Aboriginal title lands—directly to our people, to our elders, following our own spiritual and ceremonial ways, in the Tsilhqot’in Nation’s House of Government.

Bringing the spirit home: this is what the Nov. 2 exoneration of our war chiefs was about.

In planning for the exoneration event, the Tsilhqot’in Nation requested that the Prime Minister ride in on a black horse with our chiefs and people. A hundred and fifty four years prior to this, in one of the final acts of the Chilcotin War, under a flag of truce, our head war chief Lhats’asʔin rode a black horse into the colonial militia’s camp for peace talks. Deceived, Chief Lhats’asʔin, along with our four other war chiefs, were arrested, tried as criminals, and hanged in Quesnel, B.C. Our sixth war chief, Chief Ahan, was later captured and hanged in New Westminster, B.C.

Our war chiefs never returned home to their communities, families, or children; they were our generation’s great-great grandparents. However, the horse did return. Tsilhqot’in history tells us that it escaped the site of execution in Quesnel, swam both the Fraser and Chilcotin Rivers, and returned to a Tsilhqot’in village site to the family of its owner—without its rider.

It is because of this that the Prime Minister entering the exoneration event on a black horse carried an immense significance to our people. In response, our people held up cedar boughs in solidarity, as part of the healing and cleansing that we were, and are, journeying through. It was the first collective step for the Tsilhqot’in Nation and Canada, together as equals. As head chief of Canada, Trudeau started a different story. He brought honour to our war chiefs.

Upon entry to the event, I, along with the other Tsilhqot’in chiefs, Trudeau and Crown-Indigenous Relations Minister Carolyn Bennett, placed cedar boughs in a large central fire, circling it as the smoke cleansed us of a past of mistrust. Our elders watched on, holding their cedar boughs through thick gloves to protect from the cold wind coming off the mountains surrounding us.

This was the first time an active Prime Minister stepped on our land—showing respect to our elders, and walking among our people.

It’s been a long process to get here. On Jun. 26, 2014, when the Supreme Court of Canada recognized Aboriginal title for the first time in Canada’s history to a portion of Tsilhqot’in territory, we made it clear that our next order of business was Canada’s full exoneration of our war chiefs of 1864. A reporter at the time stated that B.C. had offered a pardon years prior—implying guilt—and it was only then that we fully understood the enormous work ahead of us. We had to work to teach Canada about the weight that our Nation has collectively carried over the past 150 years, and to embark on a new journey together that would allow our people to heal, all while never forgetting those who sacrificed their lives for our Nation.

READ MORE: ‘All I wanted was for the government to say “yes, it’s true” ‘

Beginning this journey is not simple, because the history of our mistrust runs deep. One of the first things our children are taught is that the government deceived our six war chiefs and killed them for protecting their land, culture and families. In the words of our head war chief, “we meant war, not murder.” The Chilcotin War of 1864 was just that: war. People died in this war. Road builders at the time were threatening our families and ways of life—violating our women, and threatening the spread of smallpox among our people after our Nation had already lost up to 90 per cent of its population to this epidemic, by some estimates. Sometimes I wonder what our territory would look like today if our ancestors had not declared war to ensure our survival.

When asked if the exoneration of our war chiefs was meaningful to us, my response as tribal chair of the Tsilhqot’in Nation is that this action would not have been a precondition to us sitting at the table with Canada, together as equals, if our people did not see it as meaningful. Now, part of the work ahead of us is getting to a point where actions like this are seen as meaningful for all Canadians.

On Nov. 2, Prime Minister Trudeau recognized our war chiefs as heroes to our people. But most of all, the Prime Minister recognized our truth, as a distinct Nation seeking its proper place in the fabric of Canada. This was about reconciling and doing things right—and for that, we honour his visit and his leadership. History was made on this day.