When politicians want to Make Canada Great Again, what are we supposed to say? - Macleans.ca 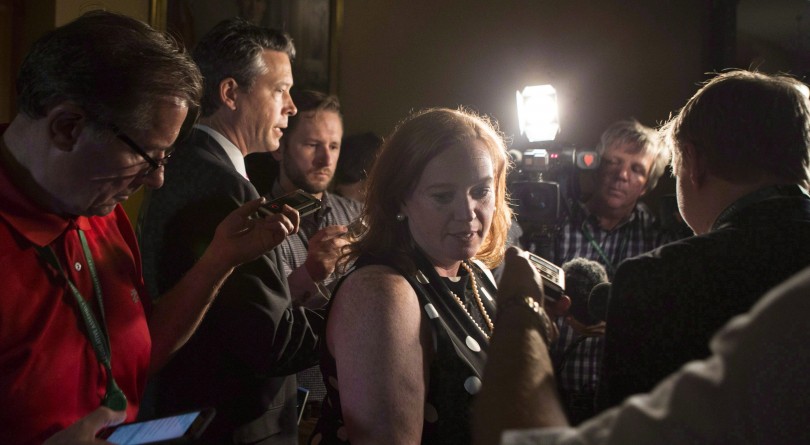 Only one week after being sworn in as Ontario’s immigration minister, Lisa MacLeod announced that the province—apparently under immense strain by an influx of only 5,500 asylum seekers—was pulling out of its financial agreement to help settle asylum-seekers. In MacLeod’s words: “There are very clear rules. There are legal ports of entry for those seeking asylum against persecution. We will always welcome people who follow that process. Illegal border-crossers are not following these rules.”

Ten days later, the Conservative Party of Canada raised the volume from a dog-whistle to a foghorn, when it tweeted—then deleted—a rather shocking image: a Black man toting a suitcase travels towards a broken fence, over a moat whose drawbridge is labeled with Prime Minister Justin Trudeau’s tweet welcoming those fleeing persecution and war. From the camera’s perspective, Trudeau’s concluding words, “Diversity is our strength,” leads the man towards the hole in the fence, and presumably towards Canada.

This hasn’t happened in a vacuum. For years, conservative politicians across Canada have spread negative falsehoods about asylum-seeking immigrants—whether it’s about the legitimacy of their applications, the contributions they make to this country, or the very nature of the international obligations that Canada has agreed to. There has been misinformation about the profligate levels of financial support that the federal government offers refugees, even though in fact many wind up owing money to the government to cover medical and transportation costs. There has been misinformation about government spending more money on refugees than pensioners, when in fact social services for asylum-seekers is constantly under attack, to the point their children are being targeted by the state’s cruelty. There are targeted questions about their ability to assimilate, leading many Canadians to agree with the idea of a “Canadian values test” imposed on newcomers.

If one were to view this, let’s say, “immigration anxiety” only through the lens of simple demography and economics, the hostility towards asylum-seekers in Canada is almost incomprehensible. Here is a country whose birth rate among the native-born has fallen so fast that our population has not been able to replace itself since 1971, when the average fertility rate was 2.1; by 2016, that number had fallen to 1.6. For decades, we’ve been having fewer children and having them later, which would have placed extraordinary pressure on our dwindling tax base and social services programs but for one factor—immigration. Which happens to account for nearly three-quarters of Canada’s population growth, and as much as 90 per cent of labour force growth.

And then there are also hard-to-understand hackles being raised around safety and protocol when it comes to the influx of asylum-seekers. After all, there exists no concrete evidence that asylum-seekers to Canada are more prone to criminal behaviour or inherently pose a risk to Canadians. And contrary to the exaggerated rhetoric espoused by Michelle Rempel, the Conservative shadow minister for immigration, as well as MacLeod, there is no “crisis” with regard to border-crossing at irregular points: The total number of crossings in June 2018 has plunged to less than a quarter of the roughly 5,700 experienced in August of 2017.

Conservative politicians and pundit types seem to have caught the vapours over accusations that this is “alt-right” rhetoric—that is, the language of white nationalists that have taken hold in other right-wing parties around the world, including America’s, where said faction has been empowered by President Trump to demonize immigrants. But when Canadians echo the very same anti-multicultural rhetoric, and vow to restore Canada to a state before this PC insanity took hold, what else are we supposed to call this kind of thinking?

COUNTERPOINT: The term “alt-right” has become a cudgel against conservatives

As much as we would like to believe in the myth of a Canada that welcomes refugees, too, none of the current-day immigration disputes demonstrate a meaningful break from Canadian history, in which the supposed poor work ethic of previous Black immigrants, their alleged criminal nature, and their assumed inability to assimilate had become conventional political wisdom. In fact, the current debate around asylum-seekers roughly echoes a similar one that Canada engaged in starting near the end of the 19th century.

Roughly 30 years after Canada formed Dominion, Wilfrid Laurier’s minister of the interior Clifford Sifton set out to lure foreign agrarians with the promise of free land across the prairies. And while Sifton’s clarion call to homesteaders rang across the west, Black people in the American South were once again reminded by their country that their status as citizens would remain second-class for the rest of their natural lives. In the midst of racial violence sweeping across America, Laurier’s Department of Immigration noticed that Black Americans from every state in the South and the midwest were driving up information requests for immigration to Canada.

For Canada—which wanted American immigrants, but not that kind of immigrant—this was less than ideal. And by 1906, then-minister of the interior Frank Oliver and his superintendents within the Department of Immigration began passing bills and enforcing rules that increasingly explicitly imposed racialized requirements on immigrants. These began as medical and character questions asked of specific racial groups—Black people, as well as Chinese people and Indians—before they were approved. By 1910, all pretence was thrown out the window, and Canada imposed a racially biased wealth test; while white Americans required only $25 to immigrate to Canada, their Black counterparts needed to show $500 before being allowed to cross the border.

READ MORE: Why Canadians believe there’s a border crisis—and why only Trump can help

Among the slew of laws increasingly designed to shut the door on Black immigration was a provision called the “continuous journey” clause, designed to stem the flow of non-American Black people who arrived to Canada via the American border. The clause dictated that immigrants to Canada had to have arrived directly from their country of origin; anyone who traveled from the United States would be turned away. In addition to those originating in America, many of Canada’s Black applicants had been born in the Caribbean, and worked in America for years as sharecroppers and labourers—and many were rejected, even though they possessed the necessary skills that Canada was looking for prospective newcomers. In the meantime, government rhetoric became increasingly brazen in referring to a “less desirable class” of settlers: In the words of Immigration superintendent William D. Scott, “the fertile lands of the west will be left to be cultivated by the white race only.”

At the beginning of the 20th century, racialized myths, prejudices, and hatred had spread across Canada far more quickly than any Black settlers ever could. By 1911, the Edmonton Evening Journal was running headlines like “We Want No Dark Spots in Alberta”—a transcription of a speech from an MP from Lethbridge, Alta.—and editorials declaring that as long as Black Americans were permitted to settle in Canada, “crime will continue, and increase, in proportion as the negro population increases.” Even agents of the Department of Immigration felt confident enough about this position that one of them, W.L. Barnstead, wrote a memo to deputy superintendent L.M. Fortier in 1914, stating: “I think it is the opinion of the department that we don’t want the West Indian n—-r,” and that “every obstacle is to be put in their way.”

Within such historical context—that of Canadians using immigration panic in an attempt to push Black homesteaders out of the plains and back to Jim Crow’s America—and with disgraceful anti-immigrant episodes throughout our history, including the SS Komagata Maru and the MS St. Louis incidents, today’s outsized anxieties over the relatively meagre number of asylum-seekers begins to make sense.

In 1975, author Toni Morrison was invited to speak at a conference for Portland State University’s Black Studies Center, and delivered an address titled “A Humanist View.” Morrison’s speech concerned the profit motive behind racist dehumanization, and contained perhaps the most useful observation on racism in our time, if only for the following passage: “[The] very serious function of racism, which is distraction. It keeps you from doing your work. It keeps you explaining over and over again, your reason for being. Somebody says you have no language and so you spend 20 years proving that you do. Somebody says your head isn’t shaped properly so you have scientists working on the fact that it is. Somebody says that you have no art so you dredge that up. Somebody says that you have no kingdoms and so you dredge that up. None of that is necessary. There will always be one more thing.”

In the conversation about asylum-seeking refugees in this country, no words could better explain the alarmism, falsehoods, fabrications, and naked animosity toward people who arrive in Canada to escape persecution and death. There will always be one last concern—one more thing to prove—before we can accept that our refugee system isn’t threatening the fabric of the country. And hardly anything besides our history of exclusion, which has left us with a quiet impulse to distrust the character and credentials of foreign strangers, could account for the kind of rhetoric that has migrated from white nationalist internet forums to the mouths and social media accounts of mainstream political parties around the world. What, precisely, makes Canada immune? If the instinct of other alt-right movements to find glory in a country’s past is any indication, why would it be out of line to point the shameful places this type of rhetoric has already taken us?

If these aren’t the attitudes and beliefs that can be ascribed to the inception of an alt-right movement, then what else are we to call it? The message boards, Facebook groups, and Twitter accounts that have swarmed the internet were purpose-built for shifting public opinion towards the far-right, and the vast majority of their tactics begin with a simple and seemingly innocuous question: when is enough enough?

I wrote in 2016 that the U.S. presidential election was, essentially, a referendum on white supremacy, and that Donald Trump’s victory was an affirmation for white nationalists who managed to eat the Republican party alive. But the phrase “alt-right” hadn’t quite come into vogue yet; the mainstream had yet to reconcile with the damage that young, clean-cut racists could do to democracy. But now we understand that good governance and a tolerant society isn’t the end-game for this kind of anti-immigrant rhetoric; it’s chaos and misery. And if our politicians are willing to play along with that rhetoric to win elections, it’s up to responsible Canadians to call it out when we see it, and to rip it out by its roots.

Now, as was the case a century ago, the rules and treaties hardly matter in this conversation. The statistics don’t matter; the veracity of the claims don’t matter. What matters to the contingent of people who would slam the door on asylum-seekers, who use the language of fiscal concern, of law and order, and of social cohesion to explain why they belong here and other people do not, is that our country is held to their imagined standards of purity. It’s a movement of people who, if you will, want to Make Canada Great Again. That needs to be named for what it is, whether they appreciate the label or not.

And until we acknowledge the reality that much of the conversation on asylum-seekers and irregular border crossers is being driven by a primal Canadian impulse to exclude, we will be trapped in this ridiculous charade forever.

It’s time for that thinking, both its shameful past and its cruel present-day iteration, to finally be shut out of our political discourse.