When Sam-I-Am fled the grans

Tabatha Southey pens a Dr. Seuss-themed ode to MPP Sam Oosterhoff and his staff, whose instinct when met with senior citizens protesting library cuts was to call the police 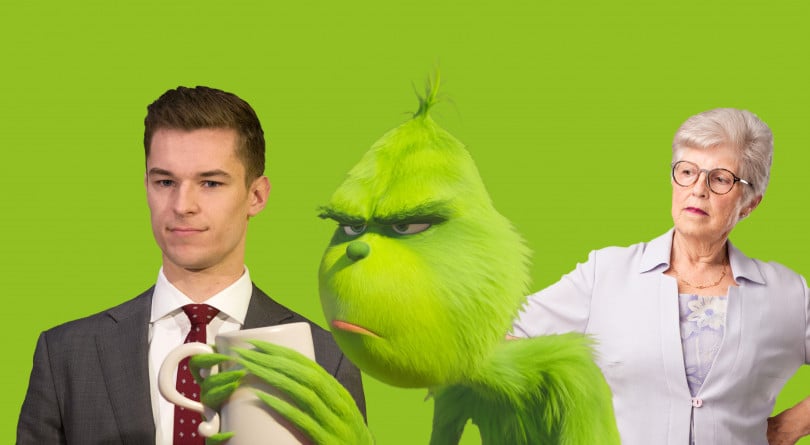 This week Sam Oosterhoff, the youngest Member of Provincial Parliament ever elected in Ontario—being then 19—made a political mistake so regrettable and avoidable that news of it quickly reached the corners of our large land. Gratifying as this is, it should not be the end of the story. Mr. Oosterhoff’s blunder is so spectacular that it deserves to be immortalized in Canada’s cultural imagination, and I think we all know that in order for this happen, there’s going to have to be a beloved rhyme.

In the future, all Canadian children must grow up knowing that William Lyon Mackenzie King sat in the middle and played with string, Baby beluga in the deep blue sea swim so wild and you swim so free, and that Sam Oosterhoff called the cops.

His constituency office staff called the police on a small assembly of senior citizens—some members of a classic book club that meets in Wainfleet—who had come by his office to protest drastic cuts the Ontario Conservative Government is making to the province’s library system.

A less determined columnist would dash off a Green Eggs and Ham parody or, as Mr. Oosterhoff himself did, fall back on a Horton Hears a Non-sequitur because, apparently, the plan is that abortion care in Canada should be decided between a woman, a 21-year-old MPP and a cartoon elephant. Minus the woman, and the doctor.

I could do a quick…

But that’s not my style. Instead, I present How the Grinch Took a Backseat to Ontario MPP For Niagara West, Sam Oosterhoff:

Every Ontarian in Ontario liked grandparents a lot…
But Sam Oosterhoff, MPP for Niagara West, did NOT!

Sam hated grannies—their whole demographic,
Now, please don’t ask why, he’s just not empathic.
It could be his staff wasn’t trained up just right.
It could be his his tie is just pulled too tight.
But I think that the most likely reason of all
May have been that he has the political instincts of a giant salamander.

But whatever the reason, his staff or his youth,
The cops got called in.
Such a nark of a newt.

“They’re bookmarking their pages!” he snarled with a sneer,
“Tomorrow’s a ‘read-in,’ it’s practically here!”

Then he growled with his elected representative fingers nervously drumming,
“I MUST find some way to stop bookish seniors from coming!”

And then those constituents, the white haired and the grey, would talk to his staff.
And here’s what they’d say;
They rely on their libraries for their literary feast.
An issue Sam Oosterhoff doesn’t care about in the least!

And THEN
They’d do something he liked least of all.
Those fifteen or so seniors, the tall and the small,
Would stand close together, with the letters they’d scrawl,
They’d stand book-in-hand and the seniors would…
Leave those polite messages expressing their concerns to the man supposedly elected to represent them and then go home without any fuss after about eight minutes.

But those oldsters had powers he feared to confront,
Some could make a cake in the shape of a bundt,
They wield knowledge of date squares, crisp golden and chewy
Of building community,
And the decimal system of Dewey.
There are those who’d make tea for them, think of things optic,
But not our Sam Oosterhoff, whose staff called in the cops quick,

And what happened then?
Well, in West Niagara they guffaw,
Young Sam learned what happens when you call in the law,
When you call the cops on nice gran-ma and gran-pops,
One thing that won’t come of it is good Oosterhoff photo-ops!

Niagara’s finest arrived, the mature readers had departed,
The fuzz entered the office to staffers coldhearted.
“Pooh-pooh to book club,” they were staffishsly humming.
“They’re finding out now that no bad press is coming!”
“Their TVs are clicking on! We know just what they’ll do!”
“Their mouths will hang open a minute or two.”
“Then those library loving seniors will all cry BOO-HOO!’”

“That’s a noise,” said the staffers,
“That we simply MUST hear!”
So they paused. And each put a hand to their ear.
It started in low. Then it started to grow…

But the sound wasn’t weeping.
Why, this sound sounded like beeping!

The staff stared at Sandra
Working social media alone,
“Hey Sandy,” they called,
“What’s up with your phone!”

“We’re trending on Twitter,” she said with a cheer,
“Someone tell Sam, he really must hear!”
“We sent them all packing, those folks with their pensions,”
“Um, Sandy,” said the intern, “I’d check our mentions…”

They HADN’T stopped bad press from coming!
IT CAME!
Somehow or other, it came just the same!

And MPP Sam with his smartphone, not quite in the know,
Stood puzzling and puzzling: “How could it be so?”
“It came without pressers, it came without ads,
it came without oppo,
or polling.
It came with grandads,
“And he puzzled three hours, till his puzzler was sore,
Then Sam Oosterhoff thought of something he hadn’t before!
“Maybe bad press,” he thought, “doesn’t come from the liberal elites and special interests galore.”
“Maybe… perhaps…I could have done a little bit more…
Actually nevermind, I’m pretty sure it’s the old people’s fault.”

He cried,“Put out a statement!”
It’ll go just like this,
Now quick to the phones, staff!
There’s no way we can miss!”

“Say: ‘I’d love to have listened,
To your whines and your moans,
About how septuagenarian scholars,
Rely on inter-library loans,

It’s just a matter of scheduling,
You surely must see,
You must only protest,
When it’s convenient to me!”

“Explain that we run an office professional,
People bring “sensitive subject matter,”
It’s quite the confessional,
Folks visiting their MPP do so in stealth.”
These things can’t be public, they’re not women’s health.

So now the news is everywhere,
The damage is done,
BREAKING: When our parliamentary assistant to the minister of education sees constituents,
He calls
Nine
One
One.