When terror strikes the populist leaders cash in

Adnan R. Khan: In Turkey, Europe and the U.S., both white nationalist and radical Islamist terrorism are part of the same self-reinforcing system 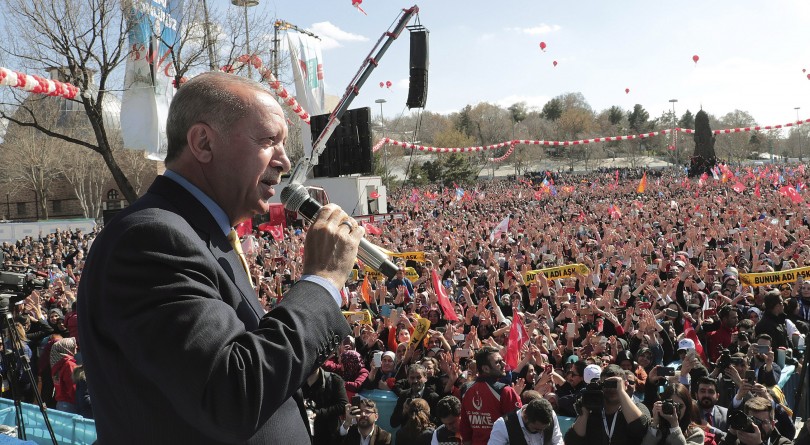 Erdogan has sparked controversy by screening video clips of the New Zealand mosque attack at rallies like this one in Konya, Turkey, on March 22, 2019. (Presidential Press Service/AP)

From New Zealand to The Netherlands, the past week has demonstrated once again how populist political discourse and terrorism feed off each other.

First, there was the devastating attack on two mosques in Christchurch; three days later, another shooting in Utrecht. The former was carried out by an Australian white nationalist holding extremist views about immigrants, Muslims in particular. The latter was reportedly carried out by a Dutch citizen of Turkish origin with potential links to an obscure radical Islamist group based in Germany.

The two attackers were different in many respects. The Christchurch attacker was not known to police and appears to have led an unremarkable life, keeping his radical views out of the public eye until he spectacularly burst out into the open. The alleged Utrecht attacker was, according to neighbours, a known criminal and drug addict who vacillated between a life of decadence and religious observance.

What connects the two attacks, however, is more important than what separates them: both played out at a time when populist political rhetoric is on the rise, and both have been used to perpetuate that rhetoric.

READ MORE: New Zealand lights a path for the world even during its ‘darkest of days’

In The Netherlands, the killing of Dutch citizens by a Turkish immigrant was seized upon by Thierry Baudet, the leader of Forum for Democracy, a far-right party. In Turkey, the attacks in Christchurch became grist for the electoral strategy of President Recep Tayyip Erdogan in the lead up to municipal elections scheduled for March 31.

For Baudet, the fact that the alleged Utrecht attacker was a Turkish immigrant played perfectly into his portrayal of The Netherlands as a nation overrun and undermined by immigrants. “We are standing in the rubble of what was once the most beautiful civilization in the world,” he told his supporters after his party emerged from provincial elections with its best showing in its brief, two-and-a-half-year history.

For Erdogan, the fact that the Christchurch attacker repeatedly threatened Turkey, and Erdogan specifically, played neatly into his claim of a plot engineered by the West to keep Turkey weak and subservient. “It will no doubt disturb some circles that we protect the oppressed from Syria and Arakan to Africa and the Balkans,” he told supporters during a rally in Istanbul. “Remnants of Crusaders will definitely be offended by the rise of Turkey.”

Populists like Baudet and Erdogan relish in reminding their supporters of what has been lost. For Erdogan, it is the Ottoman Empire, when Turks ruled over much of the Middle East and Turkey was home to the Islamic Caliphate. For Baudet, it is the colonial era, when white Europeans ruled much of the rest of the world.

The attacks in Christchurch and Utrecht perfectly symbolize how these two historical perspectives have combined to create the populist resurgence we’re seeing today.

When the Christchurch attacker invoked the siege of Vienna by Ottoman Turks in 1683 in his manifesto, he was tapping into the same kind of foreign invasion trope Baudet, not to mention Donald Trump, use regularly to whip up the winds of fear that sustain populism. When the attacker in Utrecht was reported to be Turkish-born, Baudet was handed a gift that propelled his party to electoral success.

In Turkey, the attacker’s manifesto and the livestream video he shot was used by Erdogan as props in his election rallies. He repeatedly referred to the attack in confrontational terms, as if somehow Turkey itself had been targeted, and repeatedly referenced the attacker’s desire to reclaim Istanbul and Turkish territory west of the Bosphorus for Europe.

“You won’t be able to make Istanbul Constantinople,” he fulminated at a rally in Cannakale, where he was commemorating the Ottoman Empire’s historic victory over Australian and New Zealand forces in World War I. “Your forefathers had come and seen that we had been here. And then some of them had gone back on their feet and some others in coffins. If you are to come with the same intention, then we are waiting for you. Have no doubt that we will see you off, too, the way we did your forefathers!”

For most people around the world, the manifesto was a joke, little more than the mad ramblings of an unhinged mind. But here was Erdogan, the leader of the most powerful Muslim-majority country in the world, a member of NATO with aspirations of joining the European Union, treating it as if it was a serious threat, deserving of a response.

Since the attack, Erdogan has repeatedly played partially-blurred footage at his rallies, drawing the ire of the New Zealand government. His audience, however, is very much local. At a time when Turkey’s economy is faltering and support for Erdogan’s AK Party dangerously close to collapsing, he is trying to rile up his religiously conservative base.

This is what populists do. When Erdogan refers to “Crusaders” threatening Turkey, as he does regularly, he deploys the same kind of rhetorical sophistry Trump uses at his rallies. Making Turkey Great Again, Erdogan seems to suggest, means creating enemies, and those enemies are all Islamophobes. Like Trump, Erdogan offers his conservative base, people who feel marginalized and powerless, a taste of power, and the promise of more.

But at the same time, he feeds into and reinforces the environment of confrontation white supremacists and jihadists—or any radical extremists, for that matter—need for their survival. In fact, his political success, just like the success of people like Trump and Baudet, is intimately tied to the success of radicalism. Every attack on Muslims by white supremacists is a political win for Erdogan, just as every attack on Western targets by jihadists is a gift to his populist counterparts in the West.

They all live in a mutually-reinforcing continuum.

Baudet used the Utrecht attack to help his party surge onto the Dutch national stage. Erdogan has co-opted the Christchurch attack for his own political advantage. But the consequences for their own societies, and the people around the world they claim to represent, could be deadly.