When the coronavirus pandemic is over, will we erect our own tsunami stones?

There will be other plagues. Our children or grandchildren will almost certainly be faced with the same dilemmas we face now and our great-grandparents faced in 1918. How can we prepare them for those inevitable disasters? 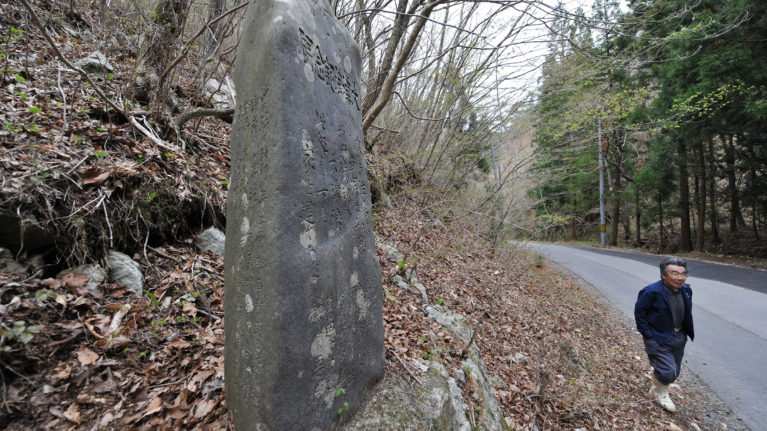 A stone monument warns of deadly tsunamis of centuries past, on the Pacific coast in Japan (Kazuhiro Nogi/AFP/Getty Images)

In Japan, there are stone markers that can be found around the island, on high ground, near the shore. They are inscribed with variations of the same warning: Do not build below this point.

These monuments were erected by survivors of long-forgotten tsunamis. The stones marked the point where the waves crested. They were meant to warn future generations to stay safe by avoiding the coastal lowlands at this particular point.

Some are ancient, others were placed as recently as 1896, only a century ago—but long enough for people to forget the two tsunamis that struck that year, killing over 22,000 people.

In some cases, these ancient warnings were heeded and the nearby towns stuck to the safety of the high ground. In other places, the warnings were forgotten or ignored, successfully for the most part—until 2011. That year a magnitude-9.0 earthquake sent waves as high as 30 feet crashing against the shore, drowning 12,000 people. The villages that had heeded the warnings of the tsunami stones survived far better than most.

Japanese academics who study disaster preparedness believe it takes about three generations to forget hard lessons of survival. We tell our children what happened, and our grandchildren, and then memory fades.

The last great global pandemic was just over 100 years ago. My grandfather told me that his father had just returned by boat from overseas, where he’d been gassed in the trenches. He had travelled overland to their farmstead in northern Saskatchewan, to be reunited with his family. He brought influenza with him, and his wife died mere days after he came home.

My family remembers the broad strokes of that tragedy, but not the details. I can’t tell you what they tried to stay safe, or what they wished they had done differently. As I worry about keeping my own family safe with the arrival of another global pandemic, I wonder what my great-grandfather would have to say. But those memories are gone.

There will be other plagues. Our children or grandchildren will almost certainly be faced with the same dilemmas we face now and our great-grandparents faced in 1918. If we could erect our own tsunami stones, what would they say?

RELATED: Does Ottawa owe you a flight home?

I am not an epidemiologist. But, like all of us, I have been consuming the advice and warnings of those who have spent a lifetime studying pandemics. And, what has become painfully obvious is that no one really knows what to do. Some experts advised shutting the borders immediately. Others claimed the ensuing panic to come home flooded our airports and only accelerated the spread of the virus.

For weeks we were told not to use face masks. And then we were told that we must. A professor with a long string of academic titles wrote that we must sterilize our groceries. I then read another who assured us this wasn’t needed. Some governments are testing and tracing everyone—others don’t think this is a priority at all.

With all the confusing and contradictory guidance, I don’t know how to best protect my own family. Can they walk in the park with their friends? Should I be wiping down the vegetables? And when do we wear masks?

The high ground is hard to find.

Unfortunately, these days I have limited faith in the ability of our political classes to set aside their partisan interests in favour of the collective good. Ass-covering and point-scoring is now so instinctive most politicians aren’t even aware they’re doing it. But, I would like to think that when this tide begins to ebb, our leaders will make a sincere effort to take stock and understand what worked, what failed, and why.

And, once we have done this, I hope we also give some thought to how we can erect our own tsunami stones, warnings that will abide, outlive us, and point our grandchildren toward safe ground, so they can do better than we have done.

This article appears in print in the July 2020 issue of Maclean’s magazine with the headline, “Our own tsunami stones.” Subscribe to the monthly print magazine here.