Where is the outrage over the plight of China's Uyghurs?

Ahmed Sahi: A million Muslims are being detained in China, and Canada has not protested in any meaningful way 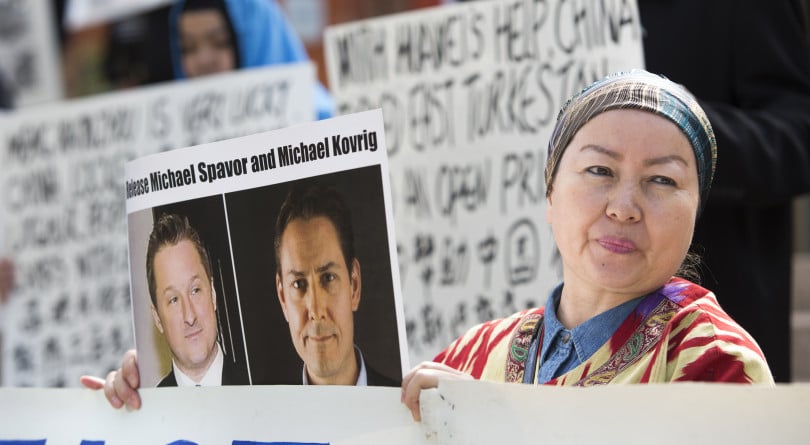 Turnisa Matsedik-Qira, of the Vancouver Uyghur Association, demonstrates against China's treatment of Uyghurs outside a court appearance for Huawei's Meng Wanzhou in Vancouver on May 8, 2019. (Jason Redmond/AFP/Getty Images)

It’s Ramadan right now, and over 1.6 billion Muslims all over the world are fasting from sunrise to sunset during the holy month. For Muslims, it is a time of devotion, self reflection and, most of all, prayer. For the Uyghur Muslims of China, this Ramadan, they pray for their freedom—and for the fate of their people.

The Uyghur Muslims reside in China’s Xinjiang region, numbering approximately 13 million. Listed officially as one of China’s 55 ethnic minorities, the Chinese government has been pushing forward with the persecution, detainment and cultural whitewashing of this small pocket of Chinese Muslims.

The UN has called the plight of the Uyghur “alarming”; by any standard, it is starting to become a human rights crisis.

According to various reports, about 1 million Uyghur are being detained and put in “re-education” camps designed to erase ethnic identity and undermine their faith. According to a UN report, there are “numerous reports of detention of large numbers of ethnic Uyghurs” who have been held “incommunicado and often for long periods”.

Aside from the detainment centers, the UN has called the persecution systematic throughout all of Xinjiang, affecting most of the 13 million Uyghur, including the “collection of extensive biometric data” like “DNA samples and iris scans, of large groups of Uyghur residents”, banning the Uyghur language from schools, and police-state-like conditions with extreme monitoring. Cases of torture and disappearances from the detainment centers are not unheard of.

The problem is, everybody in the international community knows about this, but nobody’s really doing anything about it. While the UN has studied the matter in depth and published reports on the status of the Uyghur in China, no governments are taking practical, determined measures to hold the Chinese government accountable.

Canada has reportedly raised the issue with China through meetings, letters and at the UN human rights council, but not much beyond that. And the concerns that have been raised by Canada about the issue have largely been made with little visibility.

By contrast, when the Rohingya crisis was burning at its worst a couple of years ago, global outrage was vocal, and Canada was leading the way. The Canadian government’s reaction was to create a special envoy on behalf of the Prime Minister, which was then led by one of this country’s most distinguished statesmen in former Liberal Leader (and former Ontario Premier) Bob Rae, who visited Burma to widespread media coverage and public attention. When he returned, he held a widely covered press conference that captured the raw emotion of the horror he saw there. He called the deep despair of the plight of the Rohingya something that could not be fully addressed by just one nation.

Canada declared the crisis a genocide, stripped Myanmar leader Aung San Suu Kyi of her honorary Canadian citizenship, and put sanctions on Myanmar military leaders. In summary, action was taken, with a lot of public attention.

But in the case of China’s Uyghur crisis, not so much.

Nobody wants to disrupt their trading relationship with the world’s second biggest—and now fastest growing—economy; an economic superpower that holds the keys to new markets, foreign investments and economic growth for so many nations.

According to the World Bank, China does nearly a trillion dollars in trade with the U.S. and EU countries alone. And for Canada, China is its second leading trade partner, behind only the U.S., consisting of about 5 per cent of its total trade.

Another factor holding governments back is that trade relations with China are already precarious. America is in the midst of a trade war with China, with tariff threats flying on both sides, while Canadian exports are under attack in the fallout of the arrest of Huawei’s Meng Wanzhou. Calling China out for its treatment of its Uyghur minority right now would be another irritant.

So while there’s now some international criticism of China’s treatment of Uyghur Muslims, as of yet, no country has taken any action—like strong sanctions that would send a message to China. It’s a situation in which global leaders, and their governments, have failed in their moral obligation to uphold the human rights of persecuted minorities, out of fear of possible economic hiccups.

For some countries, that may be fine. But not for Canada. For us, this is an identity crisis.

There has to be a line for Canada, where moral obligation and the sanctity of human rights ultimately surpass any other consideration.  You might say that Canada hasn’t shown much of this type of courage lately. While it’s been critical of Saudi Arabia for its gross violations, most notably the killing of journalist Jamal Kashoggi, it didn’t go so far as to stop selling it arms. Neither has it curtailed arms sales to nations like Bahrain, where human rights records are also questionable. And while it’s talked a good game about welcoming the world’s most needy, its latest omnibus bill aims to crack down on migrants crossing the border.

If we are not speaking up and acting for truth, justice and the rights of the persecuted, then we cease to be the Canada we have always been, and may not be able to continue being that Canada, because it’s hard to maintain the international respect and authority that a nation like Canada pretends to have when it starts openly retreating from its moral duties.