Where is the Liberal backbench on Trudeau’s vaccine failures?

Andrew MacDougall: In the U.K., the most vociferous critics of Boris Johnson's failures reside on his backbench. In Canada? Crickets on all fronts. 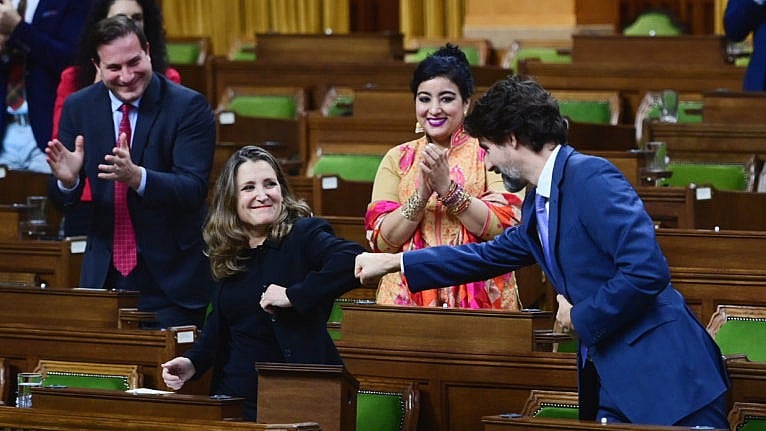 In the hierarchy of uncomfortable positions, serving as a lowly backbencher when your party is in government and blowing a critical file ranks up there with being stuck in steerage on an Air Transat long-hauler. You’re on for the ride, sure, but there’s no way for you to improve your lot as the captain wings his way to your destination; you just have to hope the people in the cockpit know what they’re doing. Welcome to the pain of the Liberal rank-and-file on their government’s slow COVID-19 vaccine rollout.

And like Air Transat, the Liberals could soon be going nowhere should the jabs situation not improve. Vaccines aren’t a silver bullet, but they’re certainly the best way out of our current mess. A penny, then, for the thoughts of the backbench as Captain Trudeau raids the COVAX sharing program for a million doses because the promised doses from Pfizer and Moderna aren’t turning up for injection across the country.

If you’re not familiar with COVAX, it’s the vaccine program rich countries are using to underwrite doses for poorer ones through their own vaccine purchases. Yes, Canada is entitled to take its share out of the pot, but with Canada having already purchased more doses per person than any other country via private suppliers, raiding the poor country vaccine kitty so early is a colossally bad look. A prime minister with any shame would avoid the UN for the rest of his life.

Trudeau’s rather desperate move is a direct consequence of the bad decisions his government has taken to date on vaccine procurement. Canada first threw its lot in on vaccine development with China(!), found out very early that bet wouldn’t pay off, but didn’t tell anyone things had foundered until months later, after which it finally paid up to buy into the panoply of private sector vaccine trials underway, including those of Pfizer and Moderna. To make up for its slow movement, the government then went massive on overall dose purchases, to the tune of 9.6 jabs per Canadian.

The problem, of course, is that most of those doses will be late arriving, behind orders from countries who bought in earlier. And while Trudeau is sticking to his promise that all who want a dose will have one by the end of September, it’s hard to see how the current vaccine delivery schedule bears that out. Even the new vaccine production facility wheeled out by Trudeau this week won’t be operational until the end of the year, at best. Britain, by contrast, will have all of its priority groups jabbed by mid-February (approximately 15,000,000 people) and is jabbing 2.5 million people per week.

Which brings us back to the Liberal MPs stuck in coach on the government plane. At some point, the backbenches will start getting upset about the slow rollout of COVID-19 vaccines across Canada. It’s hard to think of anything more foundational to their re-election. Heck, they might even be upset as we speak, not that there is any public evidence of discord. If the pips are squeaking it isn’t registering.

For now, the Liberal line still seems to be that Canada is weathering the storm rather well, even as others race ahead on vaccines. This week, Trudeau even ventured that the United Kingdom would prefer to be Canada on some fronts. And while I suppose Boris Johnson would rather have Canada’s death totals (20,000 vs. 100,000), I’m sure he would also rather have Trudeau’s supplicant backbench and Canada’s relatively limp press.

Johnson and his government have screwed up many elements of their virus response but the most vociferous critics of that response reside on his backbench. The 70-strong ‘COVID Recovery Group’ is a constant thorn in Johnson’s side. Can you imagine even seven Liberal MPs having the guts to take Trudeau on?

And while the COVID Recovery Group are wrong on the merits of lockdown, it’s encouraging they’re at least presenting an alternative perspective to the government on how to approach difficult questions. Where is that challenge coming from within the Trudeau set-up? The short answer is: nowhere. The Trudeau PMO is so controlling it’s even watering down the friendly questions during Question Period.

All of which should be rich fodder for the press who, to be fair, are managing to land a few blows. But few of them are being delivered with any real conviction. One of the joys of living in Britain is watching Fleet Street go in studs up on the government each and every day. The education secretary should be sacked over his failure on schools, according to the Independent. The government’s test and trace failures show ministers have ‘lost control’, says the Guardian. Every day seems to bring another five alarm headline, which is great for accountability.

That Wednesday’s front-page Globe editorial condemning the Trudeau government’s failure on vaccines got so much attention proves these things happen all too infrequently in polite Canada. That Justin Trudeau had to raid the poor country vaccine kitty should merit at least one call for his resignation, whether from the press, the opposition, or his own backbenches. And yet, crickets.

Because make no mistake: the buck stops with Justin Trudeau. He’s the one who presided over the deactivation of Canada’s public health intelligence network. He’s the one who was too busy trying to figure out how to get his mates at WE Charity millions of dollars instead of putting that same money into vaccine makers’ hands last March. And Trudeau is the one who has kept the spectacularly-inept Patty Hajdu in her job despite there being no signs she is up, in any way, for the challenge.

If the Prime Minister has a plan to get things back on track now is the time to see it. Vague promises of everything being alright from the captain when everyone can see the plane is going to come up short of the runway won’t cut it anymore.