Why a carbon tax won't cause a recession

Opinion: Doug Ford insists the federal price on carbon is a Liberal tax grab that will inflict serious economic hardship. But none of that is true.

By Mark Cameron and and Michael Bernstein January 23, 2019 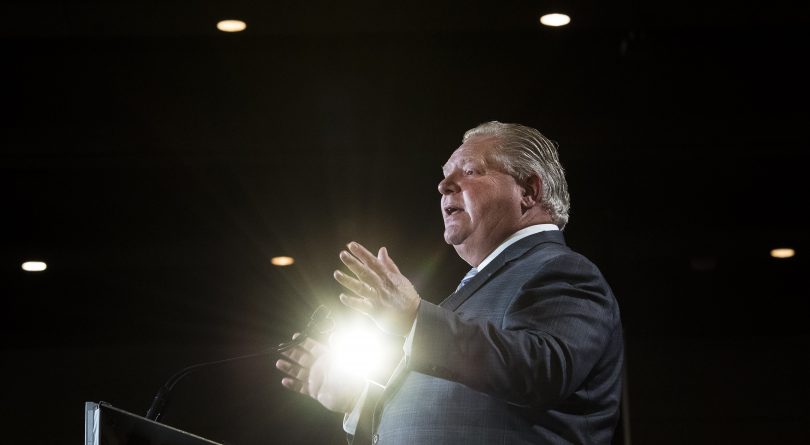 Ontario Premier Doug Ford speaks at the Economic Club of Canada in Toronto on Monday, January 21, 2019. THE CANADIAN PRESS/Nathan Denette

Mark Cameron is Executive Director and Michael Bernstein is Senior Vice-President of Canadians for Clean Prosperity.

Ontario Premier Doug Ford chose a luncheon at the Economic Club of Canada to make one of his most economically uninformed statements ever, suggesting that a modest, fully refunded carbon price could somehow lead to a recession.

In fact, economists are almost unanimous that a revenue neutral carbon tax is the lowest cost, most market friendly approach to dealing with climate change. British Columbia, which has had a carbon tax for over a decade, has had the strongest economic growth in Canada over the last several years. Furthermore, B.C.’s tax is $35 per tonne; higher than the $20 per tonne that will be applied in Ontario under the federal backstop. The vast majority of the money raised has been returned to B.C. residents as tax cuts or rebates. The federal plan will also return all funds raised as rebates.

Economists have studied B.C.’s tax extensively, and analysis shows that it has had almost no impact on the B.C. economy, perhaps reducing economic growth by 0.08 per cent from 2008 to 2012, while the B.C. economy was growing faster than the rest of Canada.

Quebec also has carbon pricing, a cap and trade system, and has similarly had one of the strongest economies in all of Canada in recent years.

The remaining 10 per cent of revenues will be returned to small businesses, schools, hospitals, municipalities and other groups affected by the tax—but not one dollar will stay in federal (or provincial) coffers. Premier Ford knows this, so why does he continue to say something that is clearly false?

It is hard to see how a modest tax, every dollar of which is returned to Ontarians, could have more than a marginally negative impact on Ontario’s economy.

RELATED: How a coalition of the unwilling formed to fight Trudeau’s carbon tax

Ford also asserts that the federal tax will hurt Ontario’s manufacturing sector. But the manufacturing sector, just like consumers, will also receive rebates to help them manage the additional costs, under the federal Output Based Pricing System (OBPS). Large manufacturers, like steel, cement, or chemical plants, will face a $20 per tonne charge for their carbon emissions. Industry will then get a rebate based on their output and sectoral emissions standards. For most industries, the rebates will cover over 80 per cent of their carbon tax bill.

If Premier Ford thinks that this system will hurt Ontario manufacturing, he should take it up with his Environment Minister Rod Phillips. Phillips recently announced a plan to charge industry a fee for carbon emissions based on Emissions Performance Standards—a system which will work almost identically to the federal Output Based Pricing System.

Ford surely knows better. His own chief budget advisor is economist Ben Dachis, formerly of the CD Howe Institute. Mr. Dachis testified before Parliament in 2016 that “the single most important thing that any government can do to transition to a low-carbon economy” and that “once your goal is to reduce greenhouse gas emissions, by far the most efficient way to do so is through a price on carbon.”

Like almost all competent economists, Mr. Dachis recognizes that the most effective way to reduce carbon emissions is to put a price on them and then let the market decide how best to achieve that end. And the best thing to do with the resulting revenues is to return them directly to the people as tax reductions or rebates. The federal carbon tax and rebate program does just that—it is a balanced and effective way to reduce emissions. A well-crafted, fully refunded carbon price will help reduce emissions but should have almost no impact on Ontario’s or Canada’s economy.