Anne Kingston: The upstart 28-year-old democratic socialist upset long-time incumbent Joe Crowley, but don't read too much into her victory 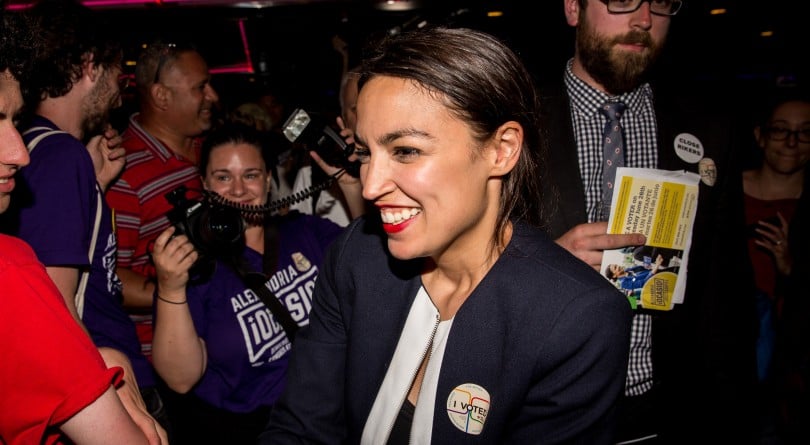 David-and-Goliath tales are rare in politics. That’s only one reason why Alexandria Ocasio-Cortez’s victory over 10-term Democrat incumbent Rep. Joe Crowley in a New York district primary in June saw mainstream media reaching for smelling salts—before scrambling to publish “Who is Alexandria Ocasio-Cortez?” stories. Many outlets—the New York Times and New York Post included—ignored the 28-year-old community activist’s run, even when her campaign video highlighting her Hispanic, working-class roots went viral. The oversight reveals MSM hubris. It also offers a lesson in human bias, the need for local media coverage, and the political capital of “authenticity” and social media in a year both the U.S. and Canada are gearing up for national elections.

Ocasio-Cortez, a member of the Democratic Socialists of America who ran on a platform of Medicare for all, tuition-free public colleges and abolition of the Immigration and Customs Enforcement agency (ICE), is Donald Trump’s antithesis. Yet both tapped into disenchantment with the political status quo—and with traditional politicians. “Women like me aren’t supposed to run for office,” Ocasio-Cortez said in her campaign video. Smart and charismatic, she ran a tireless ground game. Unlike her opponent, she lives in the district and rejected corporate donations. That should have made her a big story in a year when a record number of women are running for office in the U.S.

Yet the local papers assumed the 56-year-old Crowley, chair of the House Democratic Caucus and Queens County Democratic Party, would again prevail. The Times even touted him as a House speaker, should the Democrats regain control of the House of Representatives later this year.

READ MORE: Alabama should be a wake up call for the Democrats

Here, media banked on “incumbency advantage”: in the House of Representatives, the incumbent re-election rate is a stunning 96 per cent. The advantage is lower in Canada due in part to more parties; a 2012 study in the Canadian Journal of Economics found incumbent MPs enjoy a 10 per cent “increased probability of winning over non-incumbents.”

Name recognition, greater fundraising potential and human bias are all factors. As Margaret Heffernan writes in the must-read Willful Blindness: Why We Ignore the Obvious at Our Peril: “Familiarity, it turns out, does not breed contempt. It breeds comfort.” Research shows people repeatedly exposed to certain faces find them more relatable and nicer. Tellingly, incumbency advantage is reduced by more direct contact with challengers.

It’s also telling that MSM bias toward Crowley existed even after his defeat: headlines focused on “Crowley’s upset,” with Ocasio-Cortez a nameless “young socialist insurgent.” When the Times did cover her, it dismissed the “non-traditional” media that had done so already, reporting that Ocasio-Cortez “seemed to find readier audiences with outlets such as Elite Daily, Mic or Refinery29—websites most often associated with millennial and female audiences—than with traditional publications.” These outlets are, in fact, the new frontier: Teen Vogue has shown trenchant political analysis can coexist with skincare advice; Refinery29 has a global reach of more than 500 million.

The dismissal of Ocasio-Cortez as a local story also underlines the importance of local coverage at a time when regional outlets are shuttering in Canada and the U.S. Regional papers act as feeders to bigger papers; without them, you can’t read a nation’s temperature. Mass closures of small U.S. papers made invisible the grievances of white, rural Trump supporters.

Outlets that ignored Ocasio-Cortez are now ridiculously declaring her the “vanguard of the Democratic party” or proof the party is turning socialist. Suggesting she’s “an earthquake in Democratic politics,” as the Guardian did, is catchy, but evidence doesn’t support it: Crowley was the first House Democrat incumbent to fall this year; the Democratic Congressional Campaign Committee’s chosen candidates have won 27 of 29 primaries.

Certainly, the Democrat old guard is willfully blind to any portents of change. “They made a choice in one district,” Nancy Pelosi said after Ocasio-Cortez’s victory. That’s ignoring a big Democrat upset in March that didn’t make the same headlines: Conor Lamb, a 34-year-old former Marine, scored a narrow win over the Republican incumbent in Pennsylvania, in the heart of Trump’s Rust Belt base. Lamb, a moderate with a conservative stance on guns, distanced himself from the party establishment, refusing to support Pelosi as Democratic House leader. A fault line is growing. But before we talk seismic change, consider that voter turnout in the primary that made Ocasio-Cortez a “David” on the national stage was a mere 11.8 per cent.