Why Andrew Scheer is spouting nonsense about GM

Stephen Maher: Blaming the carbon tax for Oshawa's troubles might fit the Conservatives' election narrative. But it's hopelessly off target. 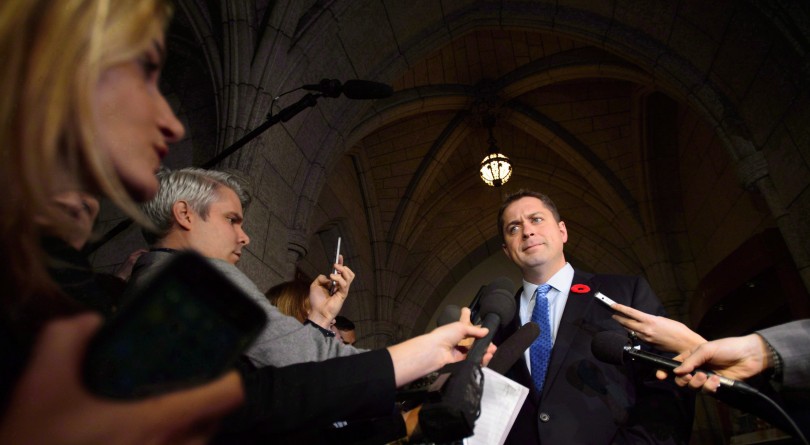 You can make a reasonable-sounding political argument that Liberals in Ottawa and Toronto are to blame for General Motors’ announcement on Monday that it is closing its plant in Oshawa.

Prime Minister Justin Trudeau talks about the middle class at every opportunity, but what did he do to save that plant? Nothing. He has ignored repeated urgent calls from the business community to match Donald Trump’s cuts to the corporate tax rates. While Barack Obama was president and Stephen Harper was prime minister, Canada had lower corporate tax rates, which gave us a key competitive advantage.

Now that we are at a disadvantage, companies making a low-margin product—like cars—need to look hard at all costs, including corporate taxes. We should not be surprised, then, if they decide to keep plants open in Michigan and close them in Ontario.

And Kathleen Wynne’s Bill 148, which raised the minimum wage and imposed new rules on employers, is the kind of thing employers dislike. The auto industry was exempted, and Doug Ford has since reversed most of it, but at the time that General Motors was making its decision, it may have been anticipating a more difficult business environment in Ontario.

Then there’s the cost of electricity, which Ontario Liberals managed to drive way up, and NAFTA, which Trudeau recently finished renegotiating, seemingly without knowing that GM was going to shut its Oshawa plant.

Given all that, Conservatives ought to be able to argue that the prime minister and his Liberal friends have made foolish mistakes that resulted in the loss of 2,500 good manufacturing jobs in the industrial heartland of Ontario, jobs we could not afford to lose.

READ MORE: What the deficit-loving Trudeau Liberals could learn from General Motors

You can’t actually prove that the Liberals are responsible—since GM is also closing four plants in the United States, and the auto manufacturing business is going through a challenging transformation—but it’s Andrew Scheer’s job to lay the blame on Trudeau and offer a different set of policies (like lower corporate taxes) so that voters can weigh their options in the election next fall.

But instead of making the kind of case that I outlined here—linking this decision to a broader set of policies that make life difficult for Canadian business—Scheer blamed the carbon tax.

In Question Period on Wednesday, he repeatedly pressed Trudeau on the subject: “Now that we have seen the impact of this policy, chasing future jobs and investment away, will he do the right thing and cancel his carbon tax?” This is a ridiculous argument, entirely off target. Scheer might just as well blame the plant closure on the Toronto Maple Leafs power play.

In 2020, the carbon tax will add about $30 to the cost of a $22,000 vehicle, practically nothing. On the most important political issue of the week, Scheer was spouting nonsense. “The carbon tax is not an issue in the GM closure in Oshawa,” says Charlotte Yates, director of the Automotive Policy Research Centre at McMaster University. “My God, they’ve been running under capacity for years.”

GM says that it is closing the plant because the sedans manufactured there are not selling well, and the company wants to focus on electric and autonomous vehicles, the future of the industry.

Trudeau was able to parry Scheer’s attack by pointing out that the economy is changing: “The best way to secure jobs for the future is to take genuine action on climate change and support our economies and our families to thrive through the transition to a lower-carbon economy.”

Trudeau is right about the transition we are facing, but that doesn’t mean he is doing the right things to prepare us for it.

A sensible conservative critique of Liberal green energy policies would be to urge caution. It is likely that we will all drive electric cars eventually, but it would be foolish to waste money pushing too hard, because until the price of lithium comes down, or someone invents a better battery, electric cars can’t compete with conventional vehicles on price. Government needs to create the right environment for businesses to flourish as technology changes.

That may be what Scheer thinks, but what he is saying is that Trudeau’s carbon tax will destroy everything that we hold dear, as if he is an advocate for the fossil fuel industry, not someone who wants to run a complicated economy that is at the beginning of a challenging transition.

The first thing Ontario Premier Doug Ford did upon taking office was kill green energy projects, as if he wants more pollution. He joined Scheer in blaming the Oshawa decision on the carbon tax.

Since our economic future likely depends on sustainable industries, the stridently anti-environmental message of conservatives in Toronto and Ottawa is discouraging, particularly when their focus on the carbon tax is distracting from the practical business-oriented critique of Liberal tax-and-spend policies that voters should be weighing.

So why are they doing it?

Scheer wants the election this fall to be a referendum on the carbon tax. Having decided that, everything is forced into that narrative frame, even if it’s plainly ridiculous.

It is so difficult nowadays to capture the attention of click-addled voters that politicians are forced to deliver one simple message over and over again. That means that until the election, the Conservatives are going to blame everything on Trudeau’s job-killing carbon tax.

It is a dim-witted, tedious message, but it keeps the base engaged, which helps the party raise money, and helps fend off the threat from Maxime Bernier, who can spoil Conservative chances in many ridings by splitting the right wing vote.

The real threat from Bernier is that he will force Scheer to keep engaging a section of the electorate that he ought to be able to take for granted, which will prevent him from saying sensible things to people who might listen respectfully if he weren’t spewing such nonsense.