Why Canada fails time and again on the world stage

Scott Gilmore: The UN Security Council seat loss is more proof that when a real geopolitical crisis finally comes, we have no foreign policy muscle to save us 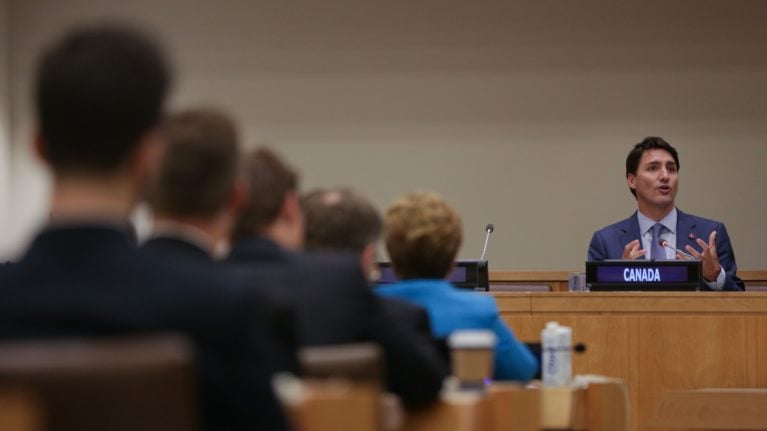 Justin Trudeau speaks during a Girl Education event at UN headquarters during the General Assembly of theUN in New York on Sept. 25, 2018 (AMR ALFIKY/AFP via Getty Images)

We were not elected to the United Nations Security Council today. There were two seats open and we were running against Ireland and Norway to fill them.

Before I continue, I need to say a few things to my former colleagues in the Canadian Foreign Service who might be reading this. You are going to roll your eyes at what I have to say. You’ll point out it’s all been said before (which is true). You will claim I don’t have the view from the field (also true). You will add that campaigns like this are infinitely harder than I understand (probably right). And you will accuse me of not appreciating the hard work being done by Canadian diplomats at home and abroad (here you are wrong).

Our loss in New York is not the fault of the Canadian diplomats who have been working for the last five years trying to secure the votes we needed today. The current team is one of the best, and they played the hand they were dealt as well as they could. And it was a lousy hand.

Norway and Ireland were always going to get the European bloc of votes. And while we are once again whoring ourselves out to Saudi Arabia with arms sales, we have been unpredictable enough to make them angry. That, combined with a typically pro-Israel foreign policy meant our Middle Eastern support was likely weak. In Africa, our aid spending has not kept pace with Norway or anyone else, and while our mining companies are mostly responsible players, there are enough bad apples to spoil the barrel. Add an angry China to the mix, which has one vote but lots of money to persuade other countries to vote against us, and the electoral math simply did not add up.

This loss is just more proof (throw it on the pile over there), that Canada’s foreign policy establishment is incredibly weak. This country does many things well. But international relations is just not one of them.

READ MORE: The UN Security Council rout: Canada’s (at the) back!

To start, we have a tiny academic community that studies foreign policy and educates future diplomats, limited to just a handful of specialized programs. And academia is almost entirely isolated from the practitioners at Global Affairs Canada. Unlike most other western countries, it is very rare for diplomats to move back and forth into universities (or into the private sector either). As a result, our foreign policy rarely benefits from new blood and new ideas.

Our politicians are possibly the weakest link in the chain. They are never elected on the merits of their foreign policy ideas, and as a result never prioritize when in office. When they do think about it, they often confuse invitations to Davos and vacations in Tuscany as evidence they are worldly. They prioritize slogans (“Canada is back!”) and costumed photo-ops over the grueling legwork and devil’s bargains that real diplomatic strategy requires.

Our political leaders can be dilettantes because the Canadian public simply doesn’t care. Foreign policy is never on the top 10 list of voter priorities. They demand almost nothing from Ottawa other than access to Disney World. And they grossly overvalue soft power, mistaking Canada’s global popularity with power and influence.

And, of course, the public has the luxury of not caring because Canada is happily isolated, protected by oceans on three points of the compass, and by a mostly reliable behemoth on the fourth.

All of this was true under the previous government, and the government before them, going back decades. It has been pointed out endlessly. Hands have even been wrung. But nothing changes. Because ultimately none of us genuinely cares enough to do anything about it.

Losing the Security Council seat is not a catastrophe. It will be greeted with a lot of shrugs, and go largely unnoticed by the public. The Conservatives will howl in outrage, but they howl about even the tiniest things, so it is impossible to tell if they actually care. Tomorrow, we will move on, because the loss just doesn’t hurt.

At this point it is obvious that in order for any of this to change, we are going to need to be hurt. Canada is going to have to burn its fingers on the stove, burn them badly, before we finally take foreign affairs seriously.

What will that look like? I don’t know. Look around the world and at the various international nightmares being visited upon dozens of nations. Refugees, war, disasters, ethnic conflicts—it could be any or all of these at once. Canada’s turn will inevitably come. And when our real geopolitical crisis finally arrives, it will be ugly and traumatic as we collectively realize how many decades were wasted, and how little diplomatic muscle we have to claw our way back the day our luck runs out.