Op-ed: The UN's global compact on refugees could be a game-changer—and Canada is well-placed to help make it a reality, say two cabinet ministers and a UN official 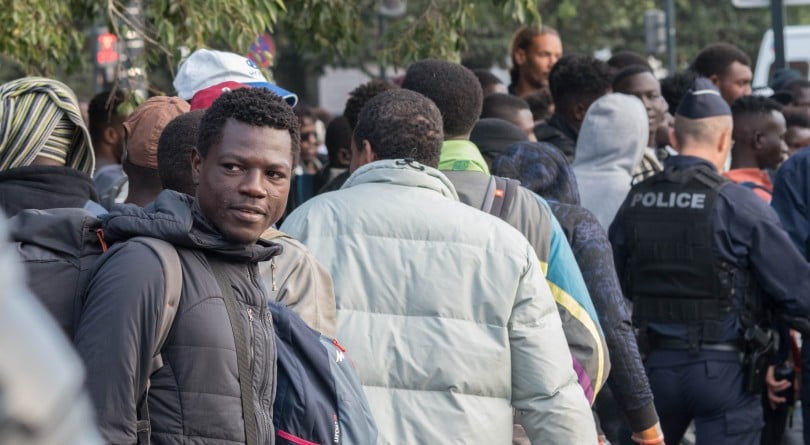 The migrant camp square Daviais in Nantes, France, on On Sept. 20, 2018. (Estelle Ruiz/NurPhoto via Getty Images)

There are few moments in history where the world comes together to devise a new plan that holds the promise of improving the lives of millions of people. The Global Compact on Refugees—which has now been released after two years of consultations with member states, intergovernmental and non-governmental organizations, and refugees themselves, and will be formally adopted by the UN General Assembly in the next couple of months—has the potential to be one of these moments.

The Compact isn’t just a bunch of words on paper. It represents the common understanding and political commitment to protect and find solutions for refugees differently. This is why it lists new strategies and specific goals. Through regular follow-up meetings on the Compact, member states and partners will thus hold each other more accountable on their promises to deliver results for refugees and their hosts.

The starting premise of the Compact is that caring for those forced to flee their home is a shared responsibility that must be borne more equitably and predictably. As stated by Prime Minister Justin Trudeau: “Millions of people around the world are fleeing their homes because of conflict and persecution. The international community must come together to address their immediate needs and to help rebuild their lives.” The Compact and its renewed commitment toward refugees and the countries and communities that host them is a moment of truth, as it calls upon all players—development actors, the private sector, non-governmental and faith-based organizations, and states—to contribute and to share responsibilities in a fairer manner.

READ MORE: Why the explosive debate over asylum seekers could define the next federal election

Canada was actively involved in the drafting of the Compact. With input from domestic NGOs, Canada was one of the first countries to offer concrete suggestions in the early days of the consultations around issues that the Compact should highlight and address, from the benefits of refugees’ economic inclusion, to the imperative of increasing political and financial support for frontline hosting countries, to ways to increase pathways to durable solutions in third countries, and to the specific vulnerabilities faced by refugee women and girls. And as the chair of UNHCR’s executive committee in 2017, Canada took an active role in convening partners on several issues in particular related to gender and education.

So Canada is committed to the task of leading and encouraging other partners to realize its ambitious goals, to ensure that action breathes life into the words of the Compact.

The Compact’s goals are, after all, ambitious. The first is clear: to ease the pressure on countries that welcome and host large numbers of refugees, currently mainly in the Middle East and sub-Saharan Africa. Frontline countries like Turkey, Lebanon, Uganda or Bangladesh have argued that the impact of hosting hundreds of thousands or even millions of refugees is significant, especially as it’s often after a sudden influx. They are right: distributing safe drinkable water, putting kids in schools or providing maternal health care to pregnant women are logistical and costly endeavours. These countries are unfairly being asked to carry the burden simply as a result of their geography as they nobly keep their borders open to those fleeing for their lives from neighbouring states.

READ MORE: How Canada is inspiring Scandinavian countries on immigration

For years, it was wrongly assumed that mainly humanitarian actors were responsible for helping these countries shoulder the cost of saving lives. The Compact calls for a broader range of involvement and investment from new actors like development partners like the World Bank, which demonstrated their leadership by stepping up by making additional financing available to support refugees and host communities. The Bank recently increased its capacity to provide resources to countries hosting refugees through long-term investments to address the socio-economic impacts of forced displacement. In June this year, Canada established an innovative partnership with the Bank to support Bangladesh in their endeavours to respond to Rohingya refugees’ needs, in which every dollar contributed by Canada unlocked five additional grant dollars in support of much-needed health, nutrition, and basic education services for the refugees.

The second goal is politically challenging, even if it is obviously laudable: to enhance refugee self-reliance. Accepting refugees as part of one’s own society is at times a daunting project for politicians and local communities in many member states around the world. Discussions about welcoming refugees are often plagued by myths: that they are a burden to taxpayers, that they may steal jobs from locals, that their socio-cultural differences will lead to tensions. The politicization of the debate around some 10,000 asylum-seekers who crossed the border irregularly in Quebec this year is a stark reminder that no society is immune to populist rhetoric.

However, refugees themselves do not want to be dependent on external aid. After putting a roof over their heads and getting food for their kids, they all desire to work. They take pride in their ability to provide for their families and to contribute to their host communities. They are keenly aware that international aid is precarious, especially as new crises emerge and resources are limited. In the most improbable circumstances, refugees—often women—open small businesses, from selling street food to designing clothes. The Compact urges the private sector to support the entrepreneurial skills of refugees with micro-credit loans and mentorship, as looking at refugees as economic agents and contributing neighbours, and not passive recipients of aid, will be fundamental in changing the narrative on refugees from being burdens to valuable members of communities until durable solutions can be found.

The third, more elusive goal is full of promise: to expand solutions in third countries for refugees. Traditional resettlement programs are no longer getting enough support. Under these programs, UNHCR identifies refugees who have particular needs and vulnerabilities in the country where they first found asylum and transfers them to a third country that is prepared to welcome them. While 1.4 million refugees have been recognized as in need of resettlement, countries have offered only some 70,000 spaces this year—a stark decrease compared to last year. However, Canada continues to be a leader in offering this solution: 10,000 refugees will be admitted in 2018 through Immigration, Refugees, Citizenship Canada (IRCC), and another 20,000 will be welcomed through Canadian private sponsors from coast to coast.

READ MORE: ‘I made it out. But the war in Syria is not over.’

New solutions are emerging, and they’re informed by Canada’s long experience with refugee issues. Countries such as Argentina, Brazil and Chile have now shown interest in resettling refugees. Others, like Ireland, Spain, the United Kingdom and New Zealand, want to mobilize their own citizens to support refugees’ socio-economic integration. More and more universities and professional schools in the United Kingdom, France and Japan, are offering scholarships for refugees. In Canada, the World University Service (WUSC) has brought more than a thousand refugees to the country by mobilizing Canadian students to support their education over the last few years. Finally, the Compact reminds us that refugees come with professional skills and experience that should be valued also in economic migration schemes. For example, Canada—with the support of Talent Beyond Boundaries and UNHCR—is piloting a labour-mobility project for refugees living in Kenya.

The fourth goal is what most refugees themselves want: to support conditions in their own countries so that they can voluntarily return to their homes in safety and dignity. Despite constant efforts by the international community, bringing peace is a demanding and arduous task these days. The Compact seeks to support efforts to end conflicts, but also to address the root causes of forced displacement. It also recognizes that the end of hostilities may not be sufficient for refugees to return home: schools and hospitals must be rebuilt, jobs must be available, and political participation must be guaranteed. Thanks to its long tradition of being an honest broker and its Feminist International Assistance Policy, Canada is well-placed to support these peace-building and reconstruction efforts, as displaced women often play a critical role in not only sustaining their families, but in rebuilding their societies.

It will be critical to deliver on our joint promise. And Canada can be counted on to support the UN Refugee Agency and our partners to do a different—and hopefully, better—job for refugees and the countries and communities that host them.