You can't drink an apology

Scott Gilmore: Canadian politicians are masters of the official apology. But it's time to recognize these rituals for what they are: distractions. 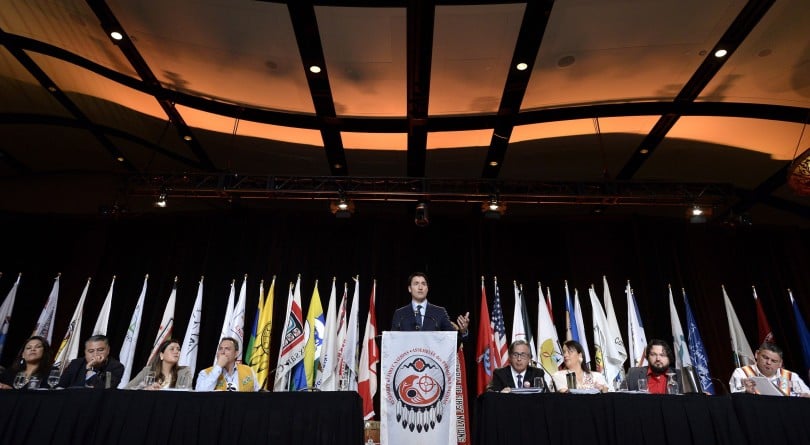 Prime Minister Justin Trudeau delivers an address at the Assembly of First Nations Special Chiefs Assembly in Gatineau, Que., on Wednesday, May 2, 2018. (THE CANADIAN PRESS/Justin Tang)

Canadian parliamentarians are so chronically petty and partisan they typically cannot agree on the colour of the sky. Yet, all but 10 were able to agree on one seemingly important issue yesterday. They voted in favor of an apology for the now infamous residential school system.

Our political leaders have already made two previous apologies for the residential schools. A decade ago, Prime Minister Stephen Harper stood in the House of Commons to express our collective regret and then nine years later his successor Justin Trudeau repeated the apology, this time while in Newfoundland. For this third time they’ve opted to kick it upstairs to a higher authority, the Pope.

Our MPs were unified in believing that since we’ve already done our bit and apologized, and given that the corrosive legacy of the residential schools continues to persist, obviously it’s now someone else’s turn to sort this thing out. Amen.

It has been theorized that there are 12 different types of Canadian “sorries,” including the “sympathetic,” the “ostentatious,” and even the “libidinous.” There is, in fact, a thirteenth type: the “political.”

Abroad, we have the reputation for being chronic apologizers. Compared to our politicians, though, the average Canadian looks callously unrepentant. An incomplete list of their official apologies includes Acadians for being deported in the 1700s, Japanese-Canadians for interment during World War Two, Chinese-Canadians for imposing a head tax, Sikh-Canadians for turning away migrants, and gay and lesbian Canadians for discrimination.

All these official “sorries” have two things in common, which explains why our politicians are so eagerly remorseful. First, the official apology is the least expensive thing they can do. In many of these cases the legacy of the original sin is so vast and pervasive there would not be enough money in the federal treasury to fully repair the damages done to the victims or their descendants. By comparison, apologies are cheap and in full supply. Here, have another.

Second, these statements of regret are for sins committed almost entirely by white, male, straight Canadians. We, as a group, have done very well over the last few centuries. And while our position of power and wealth is no longer unassailable, we’re still on top and would like to stay there. When public values shift, and we are forced to acknowledge that our previous behavior was utterly criminal, we really don’t want to do anything too dramatic.

In light of this, and the low cost, it is obvious why our political leaders like to apologize so often. But it’s well past time we recognized these rituals for what they are: distractions. The politicians making the apology (or telling the Pope he should), are probably genuinely remorseful for the sins of the past. But sincerity will not right past wrongs. Even worse, it just reduces the pressure to prevent future ones.

Consider the fact that just hours after the House voted on the Pope’s apology, the Prime Minister was across the river in Gatineau speaking at the Assembly of First Nations. There he pledged (again) to fix the water problems plaguing Canadian reserves for decades. There are currently 76 Indigenous communities without clean drinking water. Since coming to office, the Liberal government has managed to remove 61 communities off that list, but another 32 were added.

If the people of Rosedale or Westmount woke up this morning to discover they had to boil their tap water, the problem would be fixed by the end of the day.

Given this indisputable truth, standing in front of a room of Indigenous leaders to promise yet again that we are eventually going to fix this should be so unbearably humiliating that it would render Trudeau speechless from shame. Instead, he walked up to the podium with a smile. He had just voted for another apology (via the Pope). That’s something. It’s a step in the right direction. Sure, you can’t drink an apology, but it’s progress. Right?