Why cancelling the U.S.-North Korea summit may have been the right call

Opinion: If America wasn't prepared for the high-stakes summit between Donald Trump and Kim Jong-un, perhaps its collapse was the best-case scenario 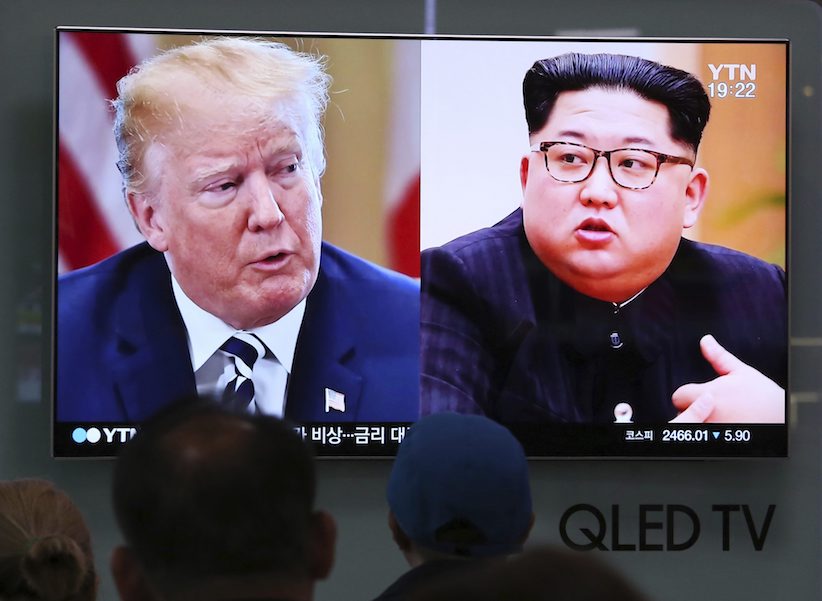 It appeared to be business as usual when South Korean President Moon Jae-In visited Donald Trump in Washington this week. Sure, there were murmurs that the historic June summit between Trump and North Korean leader Kim Jong-un might be postponed, but few imagined it could be cancelled outright. After all, Moon and his government had dedicated so much time, energy and effort into building a momentum for peace, from the Pyeongchang Olympics to the recent Moon-Kim summit and the Panmunjom Declaration, which included North Korea’s pledge to denuclearization, a commitment to improving inter-Korean relations, and a call for a genuine peace agreement from both Koreas to replace the 1953 armistice. And as a goodwill gesture, North Korea even released three Americans it had imprisoned.

So when the news broke out that Trump was cancelling the summit—partly as a response to the North Korean vice-foreign minister’s threat that the DPRK would make America “taste an appalling tragedy it has neither experienced nor even imagined up to now” as he rebuked Vice President Mike Pence’s comments that failing to make a deal would doom Kim to a fate like Muammar Gaddafi’s in Libya—it sent shockwaves across Seoul and beyond. “The Singapore summit, for the good of both parties, but to the detriment of the world, will not take place,” read Trump’s memo, written on White House letterhead. “You talk about nuclear capabilities, but ours are so massive and powerful that I pray to God they will never have to be used.”

But for all the provocative rhetoric, Pyongyang says it is still willing to meet with the American leader. In the end, it may not have been such a tragedy that this historic summit got cancelled—and if it had gone through and utterly failed, there would have been real consequences.

Indeed, there was a real possibility that Washington was not fully prepared to engage with Pyeongyang or reach the best outcome from this summit. There is a real shortage of sage and experienced senior government officials capable of advising the White House on the nuances of dealing with Kim and the DPRK, while Pyongyang studies the U.S. in a comprehensive and focused manner every day. North Koreans have always been fully prepared in negotiations in the past, and have proven themselves to be strong negotiators. Considering Trump’s lack of political or diplomatic experience, he needs to be seriously briefed to have a meaningful discussion with Kim about denuclearization and defining a lasting peace agreement. And if North Korea had walked out, it would have embarrassed the U.S. administration; they also could have made unreasonable demands that altered the spirit of the Panmunjom Declaration.

Moreover, Trump needs senior officials who are capable of doing the hard work, and who are not afraid of standing up firmly against a mercurial president. Negotiating denuclearization is nothing like the transactional business deals that Trump is used to doing. Diplomacy requires credibility and willingness to cooperate, for a greater ideal beyond national self-interest in this particular case. The task at hand is to convince North Korea to give up their nuclear ambitions, because that is in everyone’s interest. For the Trump administration to play a significant role in that ambitious endeavour, they must be willing to compromise and change The Agreed Framework, under the Clinton administration, failed not because of negotiating tactics but because both sides failed to fulfill their promises. Hence, Washington needs to carefully assess its game plan and be serious about what it offers to Pyeongyang.

The problem with North Korea, too, is too deep and complex in nature to be resolved in a single historic summit. However courageous or innovative (or eager) the sitting U.S. President might be, the situation on the Korean peninsula was never going to be resolved overnight. To think otherwise would have made it simply part of a long history of haphazard engagement that lacks long-term strategy when it comes to American policy on Korea. The division of the Korean peninsula across the 38th parallel is one such example; nobody expected that a temporary line drawn on a National Geographic map would have led to an enduring source of conflict for almost seven decades.

And a tangle of other issues at play would have to be sorted, too. If America was serious about a genuine peace agreement on the Korean peninsula, it must also decide what to do about 28,500 U.S. troops stationed in South Korea, regular joint military drills between the American and South Korean forces, and the current state of defence cooperation with the U.S. Because of how the Korean War ended in 1953, Washington must engage with Beijing and find common ground with respect to the future of the Korean peninsula, in addition to an agreement between the two Koreas. These complex questions of U.S. foreign policy need to be ironed out first, and there was not enough time, energy and effort to do so before the June summit.

Cancelling the summit damaged American credibility when there is already so little to go around in Pyongyang. And the decision came at a bad time, too; North Korea had just destroyed its entrances to the Punggye-ri nuclear test site in the presence of journalists from around the world, and instead of reaffirming its alliance with Seoul, Washington showed that it was content to act unilaterally on the Korean peninsula, creating unnecessary confusion in the optics of the U.S.-ROK strategic alliance. And referencing Libya and Gaddafi as an example for North Korea was never going to help; regime survival is the absolute priority for Kim, so the unfortunate fate of Gaddafi does not give any security assurances to Pyongyang. North Korea has made it clear that regime survival is the absolute priority for Kim—he pledged denuclearization because he is more interested in economic development—and linking him with Gaddafi does not serve American interests in changing North Korea’s behaviours.

But there is also no utility in laying the blame on Trump. Yes, he bears responsibility for lack of foresight and his treatment of Moon, for South Korea is still the main party to this conflict, but for all his faults—his mercurial temper, his preference for direct engagement on Twitter, his simplicity, and his lack of political experience—Trump did try to come to the table with the North Korean leader. And just one day after these missives, Trump said that he and North Korea had had “productive talks about reinstating the Summit.” Regardless of this failed attempt, diplomacy still remains as the optimal way of containing North Korea and its capabilities in cyber warfare, chemical and biological weapons and conventional weapons, which can easily reach millions of South Koreans in a matter of minutes. No matter how easy it may be for the U.S. to discuss military options, the geostrategic location of the Korean peninsula—millions of human lives and trillions of dollars of damage—makes military confrontation absolutely undesirable.

As with many other things in life, every failure provides a valuable opportunity to learn and grow. In fact, it is through many failed attempts that we make progress, however small it might be. It is therefore important to take a moment to fully assess what went wrong and learn the lessons. After all, there is no clear blueprint for denuclearization or a new peace agreement on the Korean peninsula. But for the 75 million Koreans across the 38th parallel, peace remains as the only viable option for the future.