In the 1920s, Ontario ended its ban on alcohol, but decided to monitor citizens' drinking habits instead—and it's feeling the hangover of that decision to this day 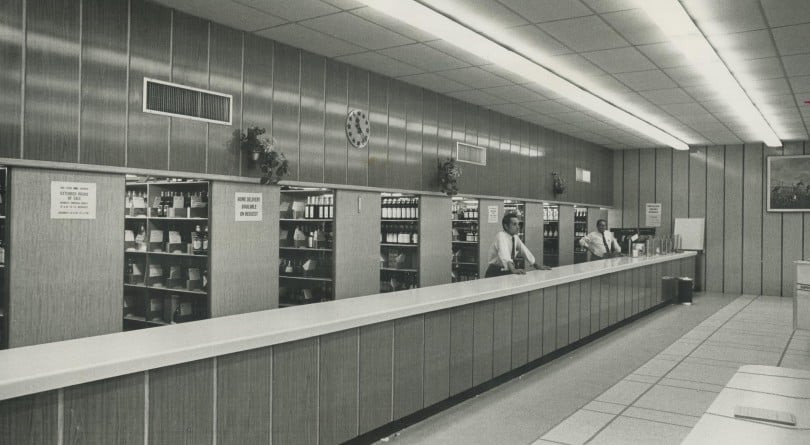 The desk at the Liquor Control Board of Ontario, in a photo from Jul. 13, 1971. (Photo by Mario Geo/Toronto Star via Getty Images)

With so much focus on how marijuana would be regulated and sold, it almost looked as if we were going to make it through an Ontario election without anyone bringing up the way we buy booze.

But then Ontario Progressive Conservative Party leader Doug Ford had to go and spoil it all by saying it was time for beer and wine to be sold in convenience stores. And given the fact that we’re currently debating the merits of private dispensaries versus state control for another drug, it’s worth asking: Why can’t we buy alcohol in convenience stores?

To understand why, we have to go back to another fraught political race—Ontario’s provincial election of 1926.

At that point, alcohol had been banned under the Ontario Temperance Act of 1916. Unlike the United States, Canada had no federal law prohibiting alcohol other than the War Measures Act, so not long after Armistice Day in 1918, most provinces at least started to have conversations about legalization. By 1924, Quebec, British Columbia, Manitoba and Alberta—plus the Yukon—had gently waded back in by introducing some form of legal alcohol sales.

Ontario was no exception to the wider dialogue, but the province was a hotbed of temperance, with its dry roots dating back to the 19th century, and with a fairly large segment of the rural population firmly opposed to repealing the act. Ontario wasn’t alone in having a strong temperance movement, but in Canada, it thrived in provinces with a majority Protestant population, especially those that had segments who were concerned about the major changes brought about by industrialization and modernization. One particularly vital chapter of the Women’s Christian Temperance Union in Picton, Ont., was fuelled by the energies of women who wanted to be more meaningfully involved in public life but couldn’t easily run for office. And in 1924, a plebiscite saw the “drys” vote down efforts to repeal prohibition, 51.5 to 48.5 per cent. Things got nasty in the divisive vote: Craig Heron notes in his book, Booze: A Distilled History, that one dry advocate had even advised then-premier Howard Ferguson that he should disregard the urban wet vote, since it was “largely made up of Jews, Foreigners and Roman Catholics.”

READ MORE: Jen Gerson on the hypocrisy of the NDP and Liberals’ opposition to booze in corner stores

Since the polarization on this issue was real but the people had spoken, Ferguson—who wanted the government revenue from the ten-cent-per-gallon beer tax that they had projected to clock in at $3 million per year—had a tricky situation to negotiate. Six months after the plebiscite, he and his Conservative MPPs took some baby steps and introduced a bill that carved out an exception to the province’s Temperance Act for light beer, which the press immediately dubbed “Fergie’s Foam.” The four-hour debate over the bill was heated, since Ontario residents and their representatives were genuinely divided. One suggestion came from Preston MPP Karl Homuth, who advocated restricting permits to sell beer to British citizens, a suggestion rejected by attorney-general W.F. Nickle, stating that nationality was a poor test to determine responsibility and said that permits would be given out on the basis of the quality of the premises (i.e. hotels) and the individual character of the applicant.

Although government revenue wasn’t a selling point to hardcore drys, who felt that the government shouldn’t need to resort to profiting off alcohol-induced death and misery to fill its coffers, the bill passed on Apr. 3, 1925. At the last minute, two clauses were added—one allowing advertising and a second that made it harder to prosecute physicians and pharmacists who were abusing their power to prescribe alcohol to “sick” clients.

The following year, Ferguson decided to push his wet agenda further, making it the defining feature of an election he went on to win handily. Although the results gave him a mandate to proceed, it was a bitter and acrimonious battle that saw him lose the support of key allies, including attorney-general Nickle. Despite his win, the optics wouldn’t have been good if he had simply re-opened the saloons and instituted a loose alcohol retail system based on licensed liquor dealers, nor did the government want to extend the powers of the pharmacists and doctors accused of contributing to the lawlessness of Prohibition by making money off being, essentially, drug dispensaries.

His answer was to stop relying so much on traditional methods of law-and-order and turn liquor control into a system that got results through the monitoring and recording of citizens’ drinking habits. Arguably the most important component of that was a permit book, like a passport, that contained two data sets. One part of the book contained people’s personal information, such as employment, marital and change of address information. The other part tracked every single purchase made at the store.

It was clear this job couldn’t be trusted to private entrepreneurs; even the doctors and pharmacists had been reckless with their prescriptions. So things had to be organized and executed by government employees who monitored and recorded all the transactions. It would be up to their discretion as to whether you could buy more or, indeed, whether you were eligible to buy liquor at all. More importantly, the Ontario government seems to have understood the value of the data and the responsibility involved in collecting it. How could you trust a private liquor retailer with a document that itemized both your drinking habits and where to find your boss and landlord?

However, the permits also made it easier to discriminate against people whom Ontarians worried couldn’t handle their alcohol—the poor, certain ethnic groups and women. The title of Margaret Jane Hillyard Little’s 1998 book, No Car, No Radio, No Liquor Permit: The Moral Regulation of Single Mothers in Ontario, 1920-1997, needs little explanation, except to say that most people receiving social assistance were ineligible for liquor permits. Equally self-explanatory is the “Indian List,” an LCBO policy of not serving certain populations, including, obviously, Indigenous people, but alsoa range of others barred from purchasing alcohol for various reasons. It’s not clear exactly when the Indian List was retired, but it seems to have existed at least until 1975.

READ MORE: The history of liquor control in Ontario and what it means for weed

The permit books were retired in 1957, but their legacy lasted well after that. A short-lived permit card system was introduced next, which allowed surveillance to continue, although they were abolished in 1961. then, throughout the 1960s and early 1970s, instead of being able to browse and shop at LCBO stores in a traditional retail experience, customers had to fill out a purchase-order form and hand it to an employee behind the counter who would fulfill the order, which made a looser version of surveillance still possible for several years.

In 1969, however, the opening of the first self-serve LCBO in Weston (now part of the Greater Toronto Area) marked a new era of liberalism in Ontario. It was a concession that people could manage their own consumption habits and that the state would relinquish some control over alcohol surveillance. Every “modernization” move since—the Beer Store, the Wine Rack, the beer aisle at Loblaws—is a move further away from the paternalism surrounding alcohol that dominated Ontario policy from the 1920s to the 1970s. Now, the only real personal data that’s collected or surveilled is when the LCBO asks for your postal code, or you hand over your Air Miles card.

So why not allow convenience stores to sell booze? It’s hard to come up with a compelling reason not to. If history is any evidence, each time a control mechanism was dismantled—Blue laws that prohibited Sunday sales, advertising alcohol on television or those women and escorts lounges we can still sometimes see evidence of—there were people who argued that it would lead to societal breakdown. But we survived wine kiosks in malls. And, in all likelihood, we’d survive convenience stores selling booze, too.

That said, it’s hard to see this expansion as a high priority at the moment, given that we’ve already got access to craft beer bottle shops, wine shops and the new booze sections in the grocery stores, not to mention the LCBO itself. Bringing up alcohol sales in Ontario, though, never fails to deliver as a hot-button issue, since Ontario voters historically love to debate how alcohol should be sold—and if the slow, decades-long escape from the province’s surveillance instincts are any indication, it will continue to be a hot topic for a long while yet.