Stephen Maher: MacKay had lots of time to learn passable French. That he didn't do the work should raise some questions about his candidacy. 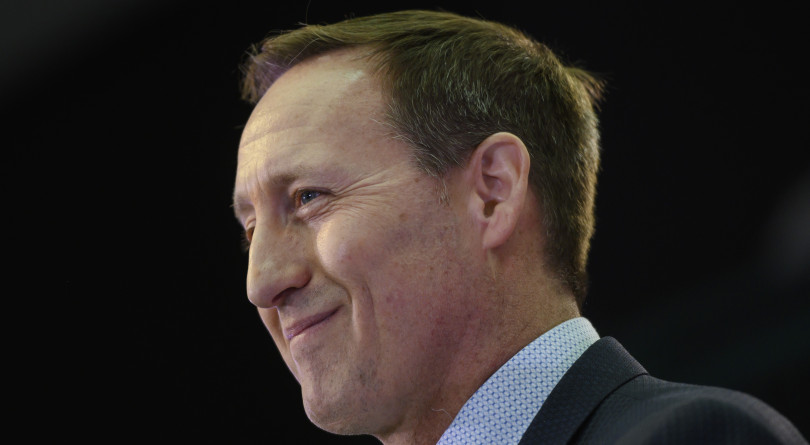 MacKay speaks to supporters during an event to officially launch his campaign for leader of the Conservatives in Stellarton, N.S. on Jan. 25, 2020 (THE CP/Darren Calabrese)

Peter MacKay made the front page of both Le Journal de Montreal and Le Journal de Quebec on Sunday morning. GOOD LUCK MISTER was the enormous headline, below a full-page photo of MacKay announcing his candidacy for the Conservative Party.

Translation: Favoured to become leader of the Conservative Party of Canada, Peter MacKay gave another proof of his incapacity to speak French.

This is très mauvais for MacKay, who, until Sunday morning, looked all but certain to become leader of the party when Conservatives gather in Toronto in June. He is still the presumptive frontrunner, mostly because the other plausible candidates have decided to spend more time with their families and less time attending meet and greets with party faithful in Gimli and Gander.

But this is not good for him.

Les deux journaux reported that he “barely managed to pronounce a few words of French yesterday using two teleprompters.” You can keep in mind, if you like, that the CEO of Quebecor, which owns the papers, is Pierre Karl Péladeau, ancien chef of the Parti Quebecois, no friend to federalist politicians. But you can also watch the video, where MacKay does actually say, at the key moment of his speech: “J’ai sera candidate.”

He ought to have said: “Je serai candidat.”

In three words, he made three mistakes. It would be like saying in English: “I have be candida.”

READ MORE: Who will be the next Tory leader? Ask Rona Ambrose.

The performance—mangling the words on the teleprompter—suggests that MacKay’s French is no better than it was when he left Ottawa in 2015, that he is not even a master of English-Canadian-politician French, the level of fluency required to deliver a stilted recitation of translated lines, so that TV producers can, if necessary, broadcast them.

This is anything but fatal to MacKay’s candidacy. He is still the front-runner. But it may puncture the growing feeling of inevitability around his campaign, because it makes you wonder if he can improve in time for an election. And, more importantly, why isn’t his French already better?

MacKay was first elected in 1997, as a Progressive Conservative, a party then led by the bilingual Jean Charest, while Jean Chretien, who is bilingual, was prime minister. Charest was succeeded by Joe Clark, who is bilingual, and then by MacKay. MacKay then merged the party with the Canadian Alliance, which was led by Stephen Harper, who is bilingual, and served as minister of defence, foreign affairs and justice, facing off in the House against Liberal leaders Stephane Dion, Michael Ignatieff and Justin Trudeau, and NDP leaders Jack Layton and Tom Mulcair, all of whom were bilingual.

While he was a minister, he was eligible for free, first-rate one-on-one French classes, with the option of flitting off to Quebec for week-long intensive courses.

MacKay is not a Vancouver businessman who recently decided that he should toss his hat in the ring. This appears to be his life’s work, so why hasn’t he learned to conjugate être?

There are those, like Ken Whyte, a former editor of this magazine, who argue that the Conservatives ought to set aside the French-language requirement, since the Tories don’t often win many seats in Quebec anyway (and since Quebecers tend not to even vote for bilingual leaders from outside Quebec), and just pick the best candidate for the job.

I think that is an interesting but not persuasive argument, since a leader who struggles in French will look flawed not just to francophones, but to other voters as well. Part of the job of prime minister is to bridge the two solitudes, which you can’t do if you can’t don’t speak both languages.

And political strategists are loath to write off any number of attainable seats, let alone the hundred or so where francophones can constitute the margin of victory.

But even if you accept Whyte’s argument, you have to wonder, given what is at stake, what does it say about MacKay that he hasn’t done the work? Many Canadians without his advantages manage to learn a second language. Why hasn’t he?

I covered MacKay for years while I was working for the Halifax Chronicle Herald and he was the most important Conservative in the region, an experience that I don’t think either of us always enjoyed. I came to the tentative conclusion then that he was not very studious, more of a jock than a scholar. “[Trudeau] does yoga, I play hockey,” he told Brian Lilley in a pre-campaign-launch interview.

His love of sports makes him relatable, as does his beautiful family, his folksy way, his moderate blue Toryism and his ease in front of the cameras. I suspect he will find ways to appeal to all but the most rabid right wingers within the party while offering a more moderate face to centrist voters who couldn’t bring themselves to vote for Andrew Scheer. He is not a red Tory, but he can likely work with them, unlike Stephen Harper. Opponents can drag up missteps from his  past, but they will look silly if they harp on about them, especially if he is able to demonstrate that he has matured.

But Conservatives, who have some other options—including the impressive but untelegenic Erin O’Toole—ought to give MacKay’s tires a good kicking before they make him leader, especially if he can’t hold his own in a French-language debate.

After he left politics, when he went to Toronto, MacKay did not go to one of the “seven sisters,” the big Bay Street firms where high-profile former ministers usually end up, which seems odd to people who live in that world.

Before Conservatives select him as their champion, it would be good to know what kept him so busy that he didn’t have time to study French.