Why did Jody Wilson-Raybould have to go? Because: white nationalists.

Sarmishta Subramanian: In a remarkably short time, Wilson-Raybould went from best-case example of diversity in action to party pariah and mortal threat to Canada’s last hope against the alt-right 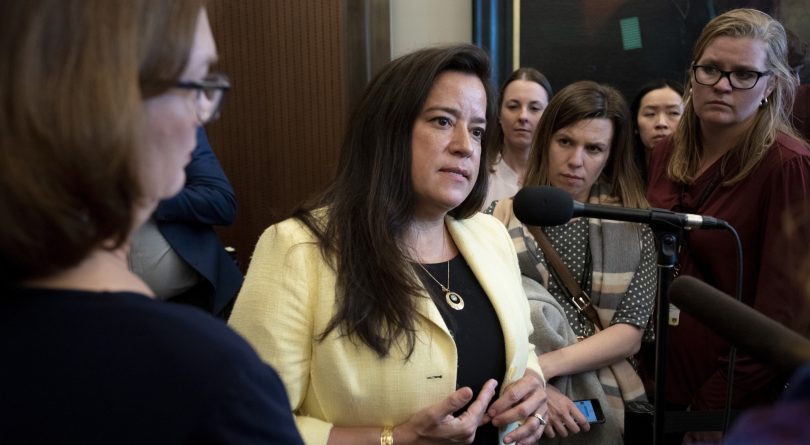 Independent MPs and former cabinet ministers Jody Wilson-Raybould, centre, and Jane Philpott, left, speak to reporters before Question Period on Parliament Hill in Ottawa, a day after being removed from the Liberal caucus on Wednesday, April 3, 2019. THE CANADIAN PRESS/Justin Tang

In the halcyon days of 2013, when Gawker, magazine print deadlines, and a mayor shrugging off his “drunken stupors” were all a thing, I regularly took midnight taxis home after late production runs at work. I ended up having a lot of conversations with cab drivers about Rob Ford. “All politicians are the same,” they’d say. “They all do it. At least Rob Ford cares about us.” Asked what it was that all politicians did, they’d respond that politics the world over is corrupt, and politicians all do things they don’t fess up to. Observant Muslim men (it came up in conversation), they could overlook the illegal substance abuse; their fury was reserved for the media, who they felt was manufacturing this scandal because it was out to get Ford. No matter what I said, I couldn’t seem to persuade them that it’s one thing to be pragmatic about politics, and another to think it is normal for your mayor to smoke crack and lie about it, while his driver and friend is charged with extortion for trying to retrieve the video evidence.

There is an obvious and wide gulf between the two cases, but listening to some media pundits, politicians, and colleagues celebrate, or shrug off, the stunning news of MPs Jody Wilson-Raybould and Jane Philpott’s ousting from the Liberal caucus—and indeed, opine on SNC-Lavalin, necessary compromises and the nature of politics the past many weeks—I found myself recalling those Rob Ford conversations I had six years ago. Worldly pragmatism is a delicate balance. Take too naïve a view and you are bound to be disappointed. But too much pragmatism—about crack smoking or judicial independence—can be equally dangerous.

READ: Not all political fights are power grabs

Worldly pragmatism marked the response from liberal-minded people to the SNC-Lavalin matter long before Tuesday’s “inevitable” events. Almost as soon as the story broke, it was framed around a coming federal election. And not only by political operatives or Liberal party officials, but by voters, citizens, people like me. The view—before very much evidence was out at all—was that any facts that emerged had to be considered against the desired end result, which for many in my circles meant not electing a Conservative government. No need for Liberal campaign ads telling us to forget internecine squabbling on SNC-Lavalin and focus on the threat of Conservative leader Andrew Scheer; a large swath of Canadians were already there—a striking picture of late-capitalist democracy. The culture of political spin has so thoroughly permeated the public sphere that voters can skip the cumbersome middle stage of being spun to—we’ll sell it to ourselves, thanks.

Some of the self-spin arguments were familiar ones: SNC-Lavalin is too important a company (“too big to fail,” one might have said a decade ago); Quebec is too important a province; this is how companies must operate to do business in some countries (“going native,” one might have said a century ago); that’s politics, and Wilson-Raybould didn’t know how to play the game; and, paradoxically, Wilson-Raybould and Philpott knew all too well how the game is played and intended to destroy Prime Minister Justin Trudeau and take over the party. (That last theory has not aged well.)

But the most virtuous, and most influential, argument—and one we are bound to encounter over and over again in the coming campaign—could be succinctly summed up as “But white nationalism.” Former Toronto city planner Jennifer Keesmaat tweeted this message last weekend:

“Dear Media looking for a scandal. I’ve got a good one for you. Endless material. And it’s causing real destruction, in real time, in real lives. Our democracy is even at stake. It’s hidden in plain sight. Just go at it. It’s called White Nationalism. You are welcome for the tip.”

Perhaps Keesmaat’s point was only that there were other important stories for media to cover. But given the high pitch of the message, and the hyper-partisan calls in other corners to change the channel from SNC-Lavalin, her tweet almost seemed to suggest that anyone talking about corruption, or the importance of a free judiciary, or the gross mistreatment of a principled senior official trying to do her job, must be apathetic—perhaps even sympathetic—to white nationalism. (I can say with confidence this isn’t true.) Another tweet that made the rounds summed up interest in JWR and SNC-Lavalin as the preoccupation of “#MiddleAgedWhiteMen.”

Framing support for the country’s most powerful politician as the brave, social-justice position has to be one of the odder turns in this increasingly strange story. But it has been a prevailing view of justice in this case, along with censuring and ousting a former attorney general because she fought to preserve the letter and spirit of the law and didn’t bend to astonishing political pressure from the PM’s advisers. And advocating for gentler treatment of a multinational company that, as the National Observer wrote in a brilliant investigation, allegedly moved millions of dollars into a brutal and murderous foreign dictatorship over more than a decade.

Judicial independence? Not something for Canadians to worry themselves about, it seems. It was instructive to watch SNC-Lavalin unspool against the backdrop of the Mueller report. When the U.S. attorney general makes a political call on a prosecutor report: bad. When our attorney general refuses to make a political call on a prosecutor report: also bad. Dissent from Jeff Sessions: good (possibly the only good from Jeff Sessions). Dissent from Wilson-Raybould: bad. Former FBI director James Comey’s increasingly detailed notes of his conversations with President Donald Trump: great. Wilson-Raybould’s recording of the Michael Wernick conversation: unconscionable.

Let’s talk about that recording—by all appearances the act of a woman who felt sufficiently under siege to think she might need proof of what actually transpired. (She was not wrong.) Within the government it seemed to eclipse every principle except how Liberal party members like to be treated by their colleagues, or perhaps how little they like a paper, or audio, trail (see the Mark Norman affair). Never mind that every other Canadian who holds a job is reminded constantly that workplace communications are not private. Our sensitive emails can be read, our corporate phone texts and Google searches reviewed, and we are not (most of us) communicating on matters of public interest. And never mind that Gerald Butts, former principal secretary to the PM, then handed over his text exchanges with Jody Wilson-Raybould, to no outrage at all.

For Liberals, that recording is a convenient (if not very believable) smoking gun—especially given that the MP who didn’t make a recording was punished the same way. The public outrage over it, though, is even more disingenuous. Really this response has nothing to do with breach of trust or an MP’s un-collegial behaviour. Imagine a muzzled senior official in Prime Minister Stephen Harper’s government recording a conversation laying bare the PMO’s machinations. We’d be shocked, but very appreciative. Besides, Trudeau vs. Wilson-Raybould was not a criminal proceeding. People could have been discomfited by how the conversation came to light and still admitted its relevance and the facts it presents.

READ: Trudeau’s ‘sunny ways’ were doomed to meet their SNC-Lavalin. Because this is Canada.

No, the reasons for the ouster vastly pre-dated the emergence of any recording.  Wilson-Raybould had to go because white nationalism. And climate change. Because it’s 2019. Because Trudeau’s our guy. Because we need just the right amount and kind of diversity. Because we can’t afford for SNC-Lavalin not to keep doing what it does (at home and, as it happens, abroad, in some deeply troubled corners of the world). And we can’t afford for Trudeau to not be PM because apparently, for a number of liberal folks, the alternatives—pasty-faced Andrew Scheer, with his alt-right connections, and (at the other end of the political spectrum) the very un-white-nationalist NDP leader Jagmeet Singh, with his coalescing fleet of diverse candidates and progressive policies—are both too awful to contemplate. Because politics, shrug.

The great comedy of the past day is in the fight against the hegemony of “middle-aged white men” being won by a middle-aged white man ousting a member of the party who happens to be Indigenous and female. In a remarkably short time, Wilson-Raybould went from best-case example of diversity in action—an independent mind challenging organizational orthodoxy on a vital political issue—to party pariah and mortal threat to Canada’s last hope against white nationalists.

The great tragedy is that whatever Liberals would prefer, the rest of the country needs more people like Jody Wilson-Raybould and Jane Philpott in politics, not fewer. More people willing to dissent, to risk their jobs for their principles, to fight for transparency and accountability, and to do politics differently. It seems almost redundant to note that Wilson-Raybould and Philpott can, and probably will, be replaced by faces who look as diverse in Liberal Party photos as they did. But anyone who may have been tempted to think differently will surely reconsider that option.