Why did pharmacare stop being a core Liberal promise?

Justin Ling: In 2019, Trudeau vowed to launch national universal pharmacare. This time around that pledge, along with plans for affordable drug pricing, has faded. 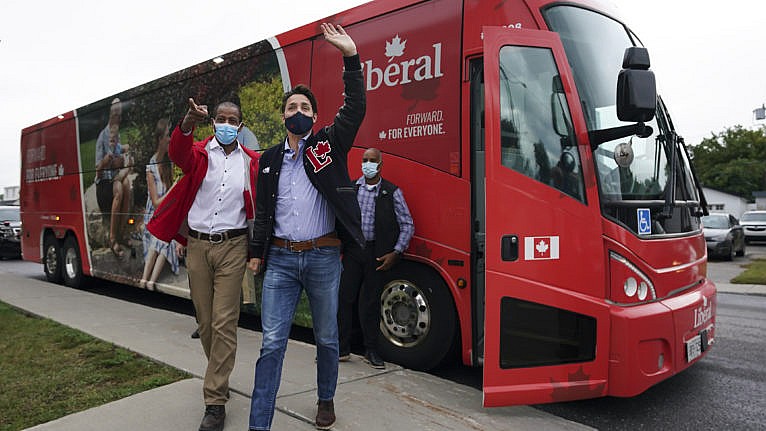 It’s the summer of 2019 and Justin Trudeau is getting set to hit the campaign trail when a report drops into his lap.

“After hearing from many thousands of Canadians, we found a strongly held, shared belief that everyone in Canada should have access to prescription drugs based on their need and not their ability to pay,” reads the results of the study, by the Trudeau-appointed Advisory Council on the Implementation of National Pharmacare.

“That’s why our council has recommended that Canada implement universal, single-payer public pharmacare.”

Trudeau was quick to welcome the report. After all, drug affordability had been an early priority of his government: In 2017, he unveiled plans to reform Canada’s drug-pricing regime to severely limit price growth.

When he hit the campaign trail later that summer, Liberal leader Trudeau made his promise crystal clear: He would “implement national universal pharmacare so that all Canadians have the drug coverage they need at an affordable price.”

Two years on, in the sequel to the last election, pharmacare has all but disappeared from the Liberal platform. Their current campaign document brags that the Liberals spent the past few years “moving forward on pharmacare,” but there is no commitment to pursuing more affordable drugs in the near future.

Asked on Tuesday what happened to that one-time cornerstone of Liberal policy, Trudeau told Maclean’s that “we continue to be committed to national universal pharmacare,” but that “over the past year-and-a-half, as we’ve been working on various challenges and priorities, the pandemic ended up taking a lot of time and space.”

It’s a polite way of saying that we shouldn’t expect a national pharmacare plan any time soon.

NDP leader Jagmeet Singh has needled the Liberal leader for the broken promise. “He’s said the right things again and again but he has no intention of following through,” Singh said in one of many press releases, contrasting his pharmacare plan with Trudeau’s lack of one.

But the national drug program isn’t the only thing that’s been jettisoned by the Liberals. Their long-awaited drug pricing measures, explicitly designed to tamp down Canada’s rising pharmaceutical costs, have been quietly pushed off for the fourth time.

Indeed, in recent months, pharma executives have gotten on calls with journalists across the country to present a stark choice: Canada can have a robust pharmaceutical industry, or it can reduce drug prices. But it can’t have both.

Paul Lucas, former CEO of GlaxoSmithKline Canada, told the Calgary Herald that the drug pricing changes could be the “point of no return for Canada and the innovative pharmaceutical industry.” Anna Van Acker, president of Merck Canada, lamented to La Presse that, “If we had, today, good policy and good relations with the federal government, and a stimulating strategy, we would use whatever tools necessary to convince businesses like Merck to invest in Canada.” Pamela Fralick, the head of Innovative Medicines Canada, an industry group for a network of pharmaceutical companies, told the National Post that, should the measures go ahead, “innovative new medicines will not launch in Canada, depriving patients of potentially life-changing new treatments.”

The industry has issued warnings but it has also offered a carrot: Should the Trudeau government create a more welcoming environment, a whole new $1 billion cornucopia of investment will flow into Canada. How do I know? I was on one of those calls.

In Canada, the prices for pharmaceutical drugs are set by the independent Patented Medicine Prices Review Board. And, per the board’s mandate, it “protects consumers by ensuring that the prices of patented medicines are not excessive.”

The quasi-judicial body largely tries to limit that excessive pricing by setting ceilings on how much a drug company can charge. But one of the main ways the board sets an acceptable price for a novel drug is to look at seven comparator countries to Canada: Germany, France, Italy, the United Kingdom, Sweden, Switzerland and the United States.

And yet, Canada has long paid significantly more than other countries for drugs. Per the board’s 2019 annual report (its most recent), Canada pays more, as a percentage of its GDP, for pharmaceutical drugs than all but one of those comparator countries. When it comes to the actual price differential for common drugs, Canada is only a shade cheaper than Germany and Switzerland.

The only country that consistently pays higher for drugs is the United States, where pharmaceuticals are regularly two to three times higher than anywhere else. America’s inclusion in the list of comparison countries totally skews Canada’s own drug pricing regime.

So Ottawa came up with a pretty eloquent solution, in a set of proposed changes in 2017: Expand the number of countries to whom the board should compare drug prices, and remove the United States.

The effect would be as a noticeable change for new drugs: Rather than having one remarkably-expensive market throwing off the curve, Canada would benchmark its drug prices to a host of nations with considerably lower drug prices.

The reforms further included new requirements for companies to report the true cost they paid to develop and market the drug, and the expected benefits—that is, the efficacy, safety and impact the drug is expected to have. Those two factors would give the board further leverage to set a cost that reflects the cost and value of the drug, and reduce room for excess profits.

Innovative Medicines Canada penned a 30-page rebuttal, insisting that the changes could  “result in negative consequences for Canadian patients, the health-care system, and the economy.”

In other words: The pharmaceutical industry has seen revenue increase by about 45 per cent, but has halved its investment in Canada.

The government source said the entire point of the board, and its price-setting mechanism, was to balance affordability with innovation. “There was a bit of a deal that was brokered to say the [Patented Medicine Prices Review Board] will allow pharma to have a certain amount of freedom in terms of the setting of drug prices and that, in turn, by allowing a little bit higher prices, that would influence R&D,” the source said.

“The opposite happened, right?” they added, pointing out the R&D has dropped by half. “So there’s never been any support for the fact that we have to charge more so that we can develop more.”

But when Ottawa first unveiled a set of reforms, it spooked the industry so severely that Ottawa retreated on a number of fronts. Suddenly, the plans to boost transparency and end confidential price-setting were dropped.

“When federal ministers of health gather at global meetings, they are sort of like: ‘How are we going to actually find out what people are paying in different places, so that we get a better sense as to what the real value of these drugs is?’” the source said. The proposed regulations had a plan on how to address that, but “that piece was taken out.”

What remains of the drug pricing reforms, particularly editing the list of competitor countries, remains a significant change. But its future looks uncertain.

“I actually think that they are taking advantage of the fact that the Liberals are in a kind of vulnerable place right now over vaccines,” the source told me earlier this year.

On that call with a high-level pharmaceutical executive, I asked: “You’ve seen a decade of rising drug prices and record profits, where has the investment been? Why would the money pour in, if this change doesn’t happen?”

In other words: What do we really have to lose?

The industry source, who spoke on the condition of anonymity, said that killing these reforms alone wouldn’t breathe new life into Canada’s pharmaceutical industry—but it’d sure help.

In pre-budget consultations, however, Innovative Medicines Canada makes it clear that it “offered an additional $1 billion to help address rare diseases and a made-in-Canada manufacturing and commercialization accelerator.” The document also makes it fairly clear that investments won’t arrive if pricing changes make for, in their view, a less-than-hospitable landscape. “These proposals were not final offers, but rather, a starting point for a conversation on some of the key issues like domestic manufacturing that we must address, together, moving forward,” the report says. And this is the pharmaceutical lobby’s job: To help maximize shareholder value and convince governments to help them do it.

The drug pricing changes were originally set to come into force on July 1, 2020. Then they were delayed to Jan. 1 of this year, and again to July 1. They are now slated to take effect on New Year’s Day 2022, but when Maclean’s asked Trudeau about the delays on Tuesday, he didn’t address them at all.

Innovative Medicines Canada is calling for the changes to be suspended altogether.  It argued in a June statement that: “Policy decisions should be based on the value medicines and vaccines bring to Canadians.” They were joined by a network of patient advocacy groups who worry that the pricing changes could limit their access to innovative and pioneering drugs and therapies.

Let’s be frank, though: Tamping down drug prices won’t help Canada’s ailing biopharmaceutical industry, nor will this $1 billion revive it.

There is an argument to be made that, perhaps, Canada doesn’t really need a domestic pharmaceutical industry. We have weathered the COVID-19 pandemic just fine, flush with both vaccines and therapeutics.

Of course, that’s a risky proposition. More domestic capacity for lifesaving things means, generally speaking, more lives saved. As Paul Wells has noted before, Canada’s status quo is both expensive and ineffective. The worst of both worlds.

There are fixes for this. The United States is a world leader in pharmaceutical research, biopharmaceuticals in particular, because it lets companies charge exorbitant amounts, yes, but also because its world-class universities exist as incubators for those companies. What’s more, the Pentagon—through the Biomedical Advanced Research and Development Authority, or BARDA—finances an extraordinary amount of research and development in the name of collective security.

Meanwhile, the Canadian government has proved itself remarkably adept at squandering its own in-house scientific breakthroughs. Government-funded agencies like the National Research Council often try to pawn off Canadian innovation on American firms rather than partnering with small companies here at home, sacrificing a prime opportunity to grow domestic capacity. After Canadian researchers, in a Public Health Agency of Canada lab, developed both a vaccine and treatment for Ebola, the NRC nearly scuttled the breakthrough by seeking out American companies to bring them to market.

Two years on, it’s not that Trudeau has nothing to show for his work. As he pointed out when asked, he has signed a universal pharmacare deal with Prince Edward Island.

Over the next four years, Canada’s smallest province will receive $35 million to “add new drugs to its list of covered drugs, and lower out of pocket costs for drugs covered under existing public plans for Island residents,” a news release says. PEI runs 25 different public drug plans.

So is it universal? No. Is it pharmacare? Not really.