Why does Stephen Harper have Trump's back?

Stephen Maher: The former prime minister's willingness to speak up for the U.S. president is misguided—and a little bit too angry 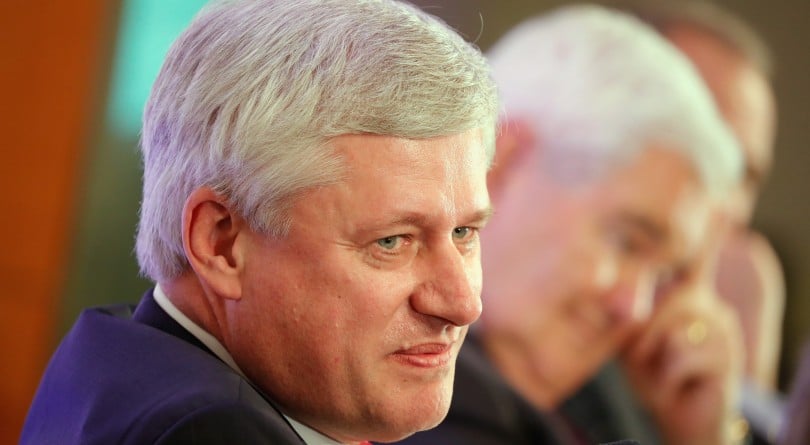 On his way into the country, Trump attacked French President Emmanuel Macron and berated British Prime Minister Theresa May on the phone. Once he arrived, he was mocked around the world for skipping a visit to a war memorial because of rain. He brooded over bad midterm results at home, vented on his staff, had to listen sullenly while Macron warned about Trumpian nationalism and, on the way home, unleashed a Twitter torrent of abuse on his hosts.

“He’s just a bull carrying his own china shop with him when­ever he travels the world,” presidential historian Douglas Brinkley told the Washington Post.

The reviews were universally bad. The journey did him no good and left everyone else looking at their shoes—unless you happened to ask former Canadian prime minister Stephen Harper. Harper attacked Macron and backed Trump during an interview promoting his book in Abu Dhabi, in the United Arab Emirates.

It is a cheap shot.

Macron made his comments about nationalism at the ceremony marking 100 years since the end of the First World War, which killed 1.7 million French soldiers and civilians—a catastrophe that has deeply scarred that country. Macron warned—sensibly enough—against the “old demons” that caused his country such misery.

“Nationalism is a betrayal of patriotism. By saying our interests first, who cares about the others, we erase what a nation holds dearest, what gives it life, what makes it great and what is essential: its moral values.”

Harper saw Macron’s warning as—coincidentally—just the kind of thing Harper warned against in his book: “disconnected elitism.” “I don’t think you can fault Donald Trump,” Harper said. “I don’t think it’s ever reasonable to fault the president of the United States for believing in the United States, any more than I would find fault with the president of France if he believed in France.”

Harper’s attack on Macron looks like name-calling motivated by partisan ill will. (In what sense is Macron more elitist than Harper himself? I can’t see it.) It is an empty attack, more appropriate for a campaigning politician than a statesman. In the interview, Harper acknowledges that populists like Trump have authoritarian tendencies, but warns against the “much greater risk” posed by Bernie Sanders and Jeremy Corbyn.

And Trump isn’t that bad, he says.

“Can these movements take these countries in a more extreme and authoritarian direction? Sure. But I think that has to be evaluated on its merits. I hear this complaint about Mr. Trump but it seems to me he operates entirely in the U.S. system of government,” he says.

Harper’s comments about Macron are of a piece with his political career, which was marked by remorseless partisanship. His book is much the same. It is at its best when Harper unleashes his inner wonk, acknowledging his government’s errors with the Temporary Foreign Workers program, for example, or itemizing its real achievements in immigration policy.

But his big-picture analysis of the rise of populism is too ideological to be persuasive for anyone who is not as conservative as Paul Ryan.

A recurring theme of the book is that Harper is absolutely certain that Trump would be better than Sanders and his ilk. “The Trumps and the Brexiteers at least want to fix what is not working with democratic, market-based economies,” he writes. “The Sanderses and the Corbyns of this world, permanently stuck in their adolescent rage, would burn the system to the ground.”

I find it hard to follow Harper very far down this path. So far as I can tell, Sanders wants to reform American capitalism so that it more closely resembles its mildly socialistic neighbour to the north, where everyone has health care.

Harper is certain that the kind of social welfare policies that Canadians enjoy would bring ruin to the United States, but does not explain why.

And his critique of the elite failure that led to Brexit and the rise of Trump is similarly silent on inconvenient facts. He makes interesting observations about doctrinaire globalists who negotiated trade deals blindly, without sufficient regard to their national interest, and repeatedly warns that they were foolish to ignore the concerns of “those who shower after work, not just those who shower before it.”

But he says nothing about the role that automation played in destroying the jobs of the rust belt workers who voted for Trump, and nothing about the way Trump blamed immigration, using racism to rally his voters, the central political fact of Trumpism.

Harper suggests leaders should heed public sentiment and be firm on immigration, and warns at length about the rise of what he calls “alienism,” the opposite of nativism, “an extreme anti-nationalism” that “reflexively identifies with other cultures and denigrates one’s own society.”

And he is vicious about professors, who poison the political system from “the only communist bastion of the post-Cold War era: Western academia.”

The villains he identifies—extreme campus lefties and bores who hate their own culture—are real enough, but it seems weird to be so fixated on them, and wrong to identify them as the guideposts of the centre left.