Lindsay Shepherd: Why I invited Faith Goldy to Laurier

'I don't agree with the far-right commentator, but we must be able to freely engage with and deconstruct her views—not silence them' 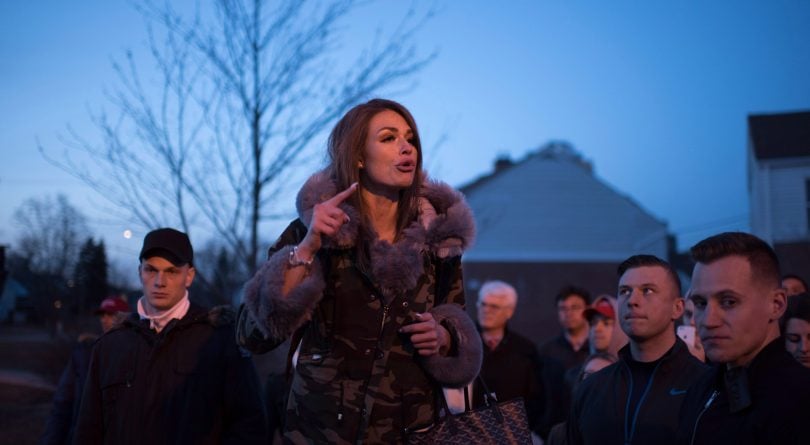 Faith Goldy, who was supposed to speak at Wilfrid Laurier University but was interrupted by a fire alarm, speaks outside the university on Tuesday, March 20, 2018. (THE CANADIAN PRESS/Hannah Yoon)

Hanging from a nearby building was a big white sheet with ominous black paint that read “Laurier enables white supremacy.” About 100 demonstrators carried signs that asserted “No Nazis at Laurier”, “Not on my campus”, “Against neo-Nazism” and “Your definition of freedom of speech is hate speech.”

“Hey hey! Ho ho! White supremacy’s got to go!” the gender-ambiguous speaker yelled into the microphone.

A little later I would be given two pieces of paper with a scribbled “F–k Nazis”, and someone would try to forcefully hand me a makeshift Ku Klux Klan robe.

I looked around the protest to see many familiar faces, such as professor Greg Bird, who had tweeted earlier in the day that free speech is a “ruse”, asking: “Is @Laurier a university or a Nazi recruitment centre?”

The protest was a scene completely divorced from any kind of reality; all happening because the student group I lead, the Laurier Society for Open Inquiry (LSOI), had invited far-right commentator and former Rebel Media personality Faith Goldy to give a talk and Q&A that evening about keeping Canada’s borders closed.

Originally, this event was supposed to be a debate about immigration in Canada–but every professor I invited to debate Goldy declined. One must wonder: if her arguments are so intellectually void and unreasonable, as critics claim, why was no one willing to take on her supposedly bunk arguments about white identity? Wouldn’t it be an easy win?

Running out of time and with no opposing speaker to represent the pro-open borders side, LSOI decided to launch the Unpopular Opinions Speaker Series, for which Goldy would be the inaugural speaker with her speech “Ethnocide: Multiculturalism and European-Canadian Identity.”

The series would feature speakers who are strong and articulate, yet polemical—speakers who discuss subjects that most might consider taboo. A central tenet of this speaker series, we decided, would be a robust open floor Q&A session at the end, so that the presenter’s views could be directly challenged and confronted.

I had my own questions for Goldy planned: wouldn’t a theoretical “white ethnostate” be rather dull and homogenous? Doesn’t a diversity of cultures in Canada enhance our perceptions of the world and understanding of one another?

I never got to ask my questions.

In fact, I never even got to hear Goldy speak a single word on her topic, as protesters pulled the fire alarm while the introductory remarks were still being made. And that was that; event over.

We all evacuated the room. Goldy made a short statement at the park across the street, and we called it a night. The approximately 300 people who had shown up to hear her speak were let down.

After the controversy last fall at Wilfrid Laurier University—where I was disciplined as a teaching assistant for neutrally presenting a debate about gender pronouns in a first-year Communication Studies course—dozens of students reached out to me with their own experiences with political correctness and censorship on campus.

It was clear that too many individuals were disenfranchised by the current campus climate that only permits a strict, one-sided social justice-oriented narrative; and from this realization, I decided to start LSOI. LSOI would endeavour to host speakers whose ideas would not be explored in the average university classroom, yet are worth intellectual inquiry.

I was bewildered back in the fall as to why my race was consistently being brought up by pundits, professors and PhD students who called me a “crying white girl” (I got emotional at times in the recorded disciplinary meeting I was subjected to) who is attempting to uphold some sort of white establishment under the guise of free speech.

I was accused of upholding white supremacist logic and using my “white tears” to oppress minorities. I wondered for months how my race was relevant to wanting to neutrally present the issue of genderless pronouns in my class.

However, throughout the Faith Goldy event pushback, it became clear to me why race was relevant to the free speech movement as a whole. It is usually the case that free speech is championed by those who see major flaws in the cultural condition. One of these current flaws is that if one is to, in any way, stand up to people who try to make disparaging remarks about white people or try to express any kind of pleasant sentiment towards Western culture, they will be labelled a fascist white supremacist neo-Nazi by the campus authoritarians who seem to derive a sick pleasure from controlling others through claims of moral righteousness.

Do I think Faith Goldy’s backstory is commendable? No. Appearing on a neo-Nazi podcast and reciting slogans associated with Nazism is distasteful, destructive to healthy race relations and completely deserving of harsh criticism.

What it means to be white in Canada today is one of those taboo topics that we must be able to openly talk about and question. I had hoped Faith Goldy would spark that discussion and have her views openly and freely engaged with and deconstructed: this simple process is one of the very basic conditions of a liberal democracy. Instead, censorious campus activists silenced a much-needed discussion.