Why Irene Gentle isn't going over the glass cliff 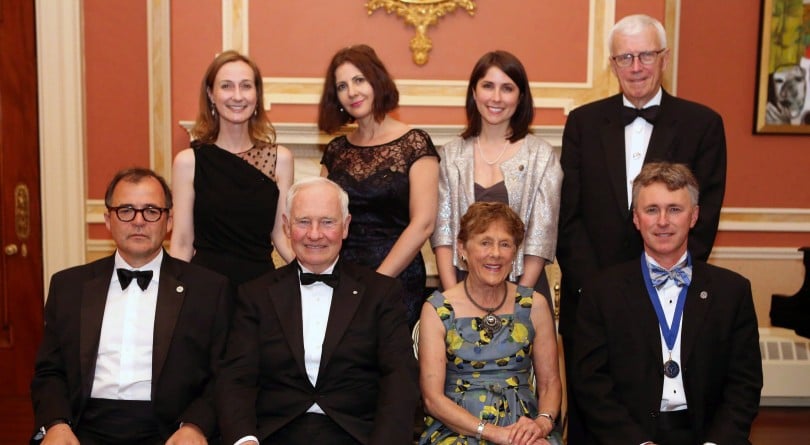 Members of the Toronto Star pose for a photo with the Governor General after winning the Michener Award in 2014. Irene Gentle (back row, second from left) was named Editor of the Star this week. THE CANADIAN PRESS/Fred Chartrand

Irene Gentle was named Editor of the Toronto Star this week. It’s arguably the most important non-broadcast job in Canadian journalism and, for the first time in the Star’s 126-year history, the job belongs to a woman. Mary Deanne Shears ran the newsroom as Managing Editor from 1997 to 2004, at the time the most important job in the newsroom but lacking the title of ‘Editor.’ And that historical footnote added some poignancy to Gentle’s moment.

For the Star’s newsroom, particularly the young women in the newsroom, it was cause for celebration. I don’t know Gentle personally, but she is widely regarded as an excellent journalist: a tough-but-fair-minded, creative and empathetic leader who knows how to build and motivate teams. One newsroom veteran told me a few days before she was named that she was the “obvious internal candidate” and her introduction was greeted with a standing ovation from her colleagues, something that is not happening very much in Canadian newsrooms these days.

Outside the Star, however, the news didn’t land with quite as much fanfare, in part because the public doesn’t hang on media appointment notices quite the way we once did, and in part because a woman ascending to a top job in Canadian journalism is no longer uncommon. In fact, a group of women running major news organizations in Canada jointly sent flowers to Gentle on the day after her announcement—the card carried 17 signatures. Just a few of the names on the list: Anne Marie Owens at the National Post, Jennifer McGuire at CBC, Andree Lau at HuffingtonPost Canada, Adrienne Batra at the Toronto Sun and Alison Uncles, Editor-in-Chief of this very publication.

This paints a pretty clear picture. More than at any point in our history, Canada’s news agenda is being shaped on a day-to-day basis by women. And so, you can understand why Gentle’s appointment didn’t seem like a landmark, so much as the continuation of an important long-term shift.

But another sentiment also emerged from news of Gentle’s promotion: the idea that top journalism jobs are something of a poisoned chalice nowadays. It is undeniable that many of these women have been handed the reins of their newsrooms at a time of unprecedented difficulty. Virtually every news operation in the country has seen substantial cuts in recent years. News reporter and editor have never been more precarious careers than they are today.

More than one friend pointed me toward an excellent piece by Rachel Giese in the Literary Review of Canada (led by Sarmishta Subramanian!) arguing that the abundance of women leading news organizations is evidence of the so-called “glass cliff” phenomenon. Simply put, research shows that companies are substantially more likely to put a woman in charge when the business is in crisis, when the board is desperate, and when the possibility of success is low. Women executives, in other words, are often set up to fail.

READ MORE: Canadians support journalism. But who will pay for it?

It’s easy to understand that skepticism. After all, it’s more than a little bit suspect that these organizations suddenly uncovered all of this female leadership talent just as the industry’s traditional financial model started to circle the drain. And there is no question that the glass cliff phenomenon is real and it is pernicious. It’s a sort of bait-and-switch game that exploits the public relations opportunity of promoting gender equality while actually serving to undermine the credibility of female leaders who are brave enough to take on impossible tasks.

But that’s not what’s happening here. The emergence of so many women in top newsroom leadership roles is a natural, generational shift that reflects the urgent need for new ideas and new blood to navigate the industry’s rapidly-shifting terrain.

If the responsibility of these women was to solve the economic crisis facing traditional news outlets, then I’d agree they’ve been handed an impossible task and shoved over the glass cliff. But their job is to marshal the resources that they have (diminished though they may be), to inspire journalists to serve the public, and to engage their audiences. They need to exploit the advantages that technology provides to make their journalism more timely, more diverse, more impactful. The record shows that’s exactly what’s happening.

Notwithstanding the obvious budget pressures, great journalism is being done every day. It’s being consumed by more people than ever. And it is making a difference. To pluck just two Canadian examples from the past 18 months, consider the Globe and Mail investigation, Unfounded, led by Robyn Doolittle, into the prevalence of local police forces failing to properly investigate complaints of sexual assault. Or consider Tanya Talaga’s Seven Fallen Feathers, her unflinching examination of the deaths of seven young Indigenous high-school students in Thunder Bay, which is sweeping non-fiction book awards. For more, look at the nominees for this year’s Michener Awards, which Doolittle accepted on behalf of her team a few weeks ago.

Beyond our borders, think of the major stories of the past year—Harvey Weinstein and the #MeToo movement; the investigation into Russian meddling in the U.S. election; the White House policy of separating migrant parents from their children. There is no question that major-outlet journalism is still having a massive impact on our culture and our political institutions.

Still, the news business is getting dramatically more difficult. The empty cubicles in our newsrooms are gnawing, daily reminders of how much this industry has already changed. It’s important to acknowledge the human cost of trying to maintain high journalistic standards at a time of severe financial strain. But if you look back in history, the news business has always been tough and turbulent. Even in the days when the average North American home subscribed to multiple newspapers and magazines, and editors wielded massive influence, hundreds of publications merged or failed and publishers were forever arguing with editors about expenses.

In 10, 20, 30 years from now, there will still be news media because there is enormous and growing demand for quality journalism. If anything, the events of the past few years may have even increased the number of people willing to pay for high-quality reporting. Small subscription-based news operations are spawning everywhere, serving everything from business to politics to sports aimed at highly-engaged niche audiences. Non-profit and philanthropic models will undoubtedly have their place. If news outlets are finally breaking their over-reliance on fickle advertisers to fund their mission, then maybe that change is overdue anyway.

The news business will certainly look very different than it does today. Many of the big institutions that dominated the last generation may disappear entirely, not because they have failed journalistically, and certainly not because they finally decided to put a woman in charge, but because the media business has always been financially difficult and it is only getting more so.

Giese finished her article with a challenge to the media industry: “At some point in the future, difficult as this is to imagine, the flux of the news media’s present is bound to settle into something more stable, whatever its shape. The real test of progress will be in how many women and people of colour, at last given a chance to participate and lead, will find durable, sustaining careers in that unknown new world.”

I put all my money on progress. Irene Gentle hasn’t crashed over a glass cliff. She’s just pulled the industry another step forward on the long, difficult climb up this mountain toward what comes next.

Steve Maich is editor-at-large at Maclean’s and the former senior vice-president of publishing at Rogers Media.