Why is Saudi Arabia still getting Canadian-made weapons?

Stephen Maher: Politicians have failed to act, even in the face of the sickening slaughter in Yemen. The killing of Khashoggi might change that. 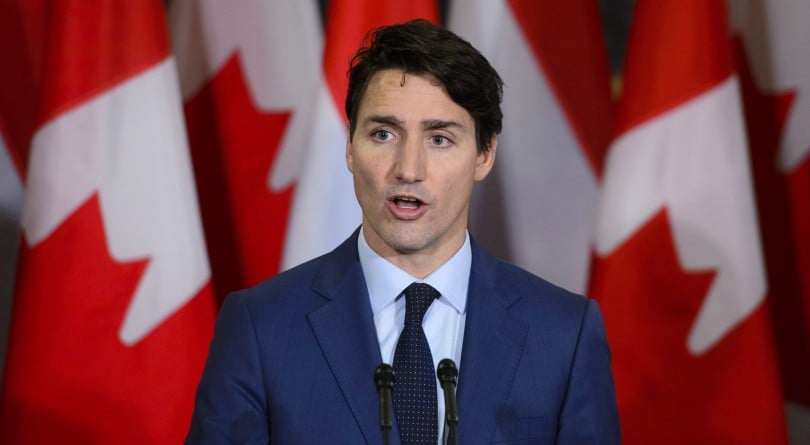 Prime Minister Justin Trudeau at a joint press conference with Prime Minister of the Netherlands Mark Rutte on Parliament Hill in Ottawa on Thursday, Oct. 25, 2018. (THE CANADIAN PRESS/Sean Kilpatrick)

The sickening murder mystery that has been unspooling ever since Jamal Khashoggi walked into the Saudi consulate in Istanbul is an excellent proof of Joseph Stalin’s maxim: One death is a tragedy, a million deaths a statistic.

Since 2015, when Shia rebels in Yemen revolted against the Saudi-backed government, thousands of civilians have been killed, mostly victims of airstrikes by the Saudi-led coalition. Many more have starved to death or died of cholera. It is a terrible, sickening slaughter, with the Saudis repeatedly blowing up hospitals and both sides regularly committing war crimes, but the world’s experience of it has been statistical, not personal.

In the click-driven media environment in which we find ourselves, war crimes in distant, horrible places do not grab the public’s attention, consumed as we all are with the daily carnival of inanities from Donald Trump.

Because of that, and because Saudi oil money has so much influence in the capitals of the West, there has been little pressure on western governments to stop selling the weapons the Saudis are using to murder civilians in Yemen.

Barack Obama backed the Saudis in the war, and while he was president he approved more than $100 billion in U.S. arm sales to the kingdom, playing his preordained role in an alliance that has changed little since 1945, when Franklin Delano Roosevelt charmed Saudi King Ibn Saud on the deck of a U.S. warship in the Suez Canal.

The Saudis provide the oil and money, in quantities that are difficult to fathom. The Americans, and their allies, provide political cover and huge quantities of arms.

The slaughter in Yemen has been great business for Canadian arms manufacturers.

Maintaining the exports in the face of the humanitarian catastrophe requires secrecy, silence and misdirection.

Funny that all three men would make the same mistake.

The $14-billion deal, negotiated while Harper was in office, provides for 928 armoured vehicles, including 119 heavy assault vehicles, with 105-mm guns mounted on turrets, the kind of weapons that can take out tanks.

The fact that they are being used in the war in Yemen is the kind of uncomfortable truth that we could ignore, at least until the Saudis flew a team of killers to Turkey to torture and murder Khashoggi, unwittingly creating the world’s weirdest thriller, transfixing news consumers around the world.

The killers’ incompetence and cruelty—they brought a bone saw and a body double—and the cascading collapse of their improbable excuses—have been irresistible to the media.

It was this story that finally changed the political calculations of the politicians who approve the arms exports, putting pressure on them to stop the guns.

So far, only Germany has suspended shipments, but Trudeau is signalling that Canada may be next. It seems likely that he would only be talking this way if he has already decided to suspend the permits.

Trudeau has been reluctant to act, no doubt for the very good political reason that thousands of manufacturing jobs in hard-pressed southwestern Ontario, and many more across Canada, depend on selling arms to Saudi Arabia. If we must turn a blind eye to the horrors they produce, so be it.

Under pressure, last week, he warned that cancelling the deal could cost us $1 billion, and resorted to blaming Harper for signing a deal that includes a non-disclosure agreement that prevents him from discussing its terms. A tweet from a former advisor suggests the contract poses knotty problems for the government, and we might well ask why we are not able to know what’s in an agreement that binds us to selling weapons to killers, although we should not expect an answer.

But while Harper is responsible for the contract, it was Trudeau’s government that signed the export permits, and his government that kept the weapons flowing while the Saudis and their allies slaughtered Yemeni civilians.

It is a tragic reality that Stalin was right. What moves people are stories—like the Khashoggi murder mystery—not statistics, and politicians respond to public pressure.

Khashoggi’s death, because of its story value, is pressing the Liberals to match their deeds to their words.

The heartbreaking starvation deaths of Yemeni children, tragically, do not have the same power.