Why is Trump the most impervious U.S. president in history?

Scott Gilmore: America's president is a liar and fraudster whose scandals, which would have destroyed any politician before him, mean nothing 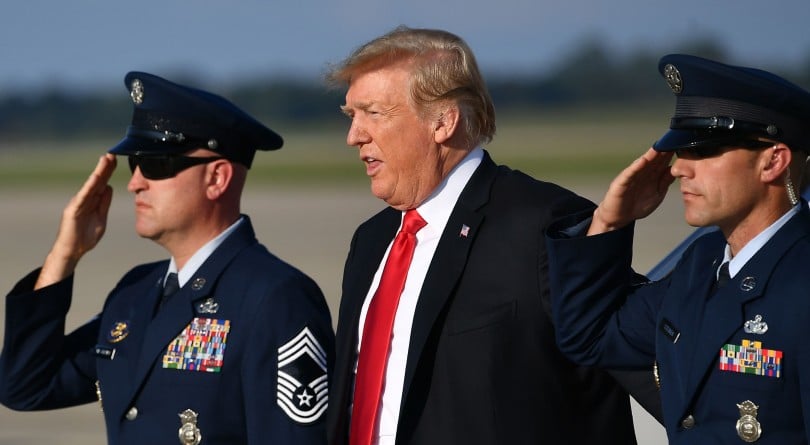 U.S. President Donald Trump steps off Air Force One upon return to Andrews Air Force Base in Maryland on Oct. 8, 2018. (MANDEL NGAN/AFP/Getty Images)

Last week the New York Times concluded an 18-month investigation with a front-page story that detailed hundreds of millions of dollars of tax fraud committed by the President of the United States. The magnitude of the scandal was unprecedented—no other American politician in history has ever been accused of a crime of this scope. According to financial records obtained by the newspaper, the president and his family illegally enriched themselves by hundreds of millions of dollars. And, making it worse, some of this money was obtained by defrauding lower-income tenants.

There is no question that if any president from Roosevelt to Obama had been accused of this, it would have plunged their administrations into crises, and likely ended their political careers.

And yet, in the Trump era, within 24 hours we had mostly forgotten about this scandal. The White House called it false and then refused to answer any more questions. Newspapers and newscasts turned to other stories. The social media dust storm blew off into another direction. Democratic politicians began to bark up different trees.

While Ronald Reagan was known as the Teflon President, Donald Trump is an entirely different league. Is it possible he is the most impervious, the most unassailable, or the strongest president in living memory?

READ MORE: In the heart of America, Trump is the only politician they know

In the nomination race, his opponents threw his own words back at him. At various times he had opposed almost every policy he claimed to support. During the election, tapes were released of him bragging about sexually assaulting women. As president, one week it is revealed he had shared highly classified intelligence with the Russians, the next we learn his own lawyer has implicated him in a felony. And every day Trump is caught in a new lie. According to the Toronto Star, which has been keeping careful track, he has said 2,717 false things as president, or approximately 4 a day, every day, since his inauguration.

And in spite of all this, his polls remain rock steady. His rallies are full. His party stands with him. Congressmen risk their reputations to defend him. And no one is predicting he will leave the White House any time soon. No other president has shown this level of political resilience.

How do we explain Trump’s apparent invulnerability? It could be that everyone, his supporters, his opponents and the press, already came to their own conclusions two years ago. If you decided he was a crook and a liar then, more revelations don’t change that. And, likewise, if you chose to support him as a great man and a patriot, any proof to the contrary is thrown in the trash heap with all the others. In other words, every new scandal is already “priced in” to his approval ratings.

This could also be an artifact of our accelerating 24-hour news cycle. As more and more of our news is distributed online and on social media, news outlets (including this one) are constantly looking for a fresh content and cute penguin tricks are promoted just as much as presidential scandals. In this environment, nothing sticks to Trump because we keep shifting our collective attention to the next shiny thing.

Or, perhaps Trump simply lives in a different universe, one where he is wildly popular and widely trusted. An America that will always believe his denials over any “evidence” peddled by the “failing New York Times”. This is undoubtedly true. The president’s approval ratings among Republicans is at record highs. You would think that the other America, where the majority distrust him, oppose his policies, and suspect him of having conspired with the Russians to win the presidency, would be able to poke a hole into that parallel universe, and let some light in. But, it is almost entirely self-contained, with its own news sources, celebrities, even its own music and movies. Red America cannot be cracked.

READ MORE: Trump gives a press conference, and the world laughs (with him?)

Maybe it’s because the Republican Party has evolved into a political machine that is solely focused on a small number of policies (guns, tax breaks, judges, immigration) and is willing to forgive anything that happens in the White House, as long as they can pursue their agenda. I think this was undoubtedly true a year ago. But other than the tax cut and the judges, few other goals have been achieved. This White House may be unstoppable, but it doesn’t seem to be going anywhere and has a pitiable legislative record.

It is also possible Trump seems untouchable because Americans simply don’t care. People like me (and presumably like you–since you got this far into my column), who follow the news and who believe politics matter, are not the majority in Canada or the United States. Voter turnout continues to fall, as do the approval ratings of every level of government and most American institutions. This is the age of cynical detachment. “Of course Trump is a crook. Why is anyone surprised? And, who cares?”

Regardless the reason, there is no question that Donald Trump is a uniquely impervious president. If none of the revelations, scandals and crimes of his first two years could knock him out of office, it is quite possible nothing will. I can imagine a scenario where he literally shoots someone on Fifth Ave, and then the next day we would yet again move on to talking about something else.