Opinion: If Canada wants to decisively threaten maximum pain and stop the escalating trade war with the U.S., it should propose expropriating pharmaceutical patents 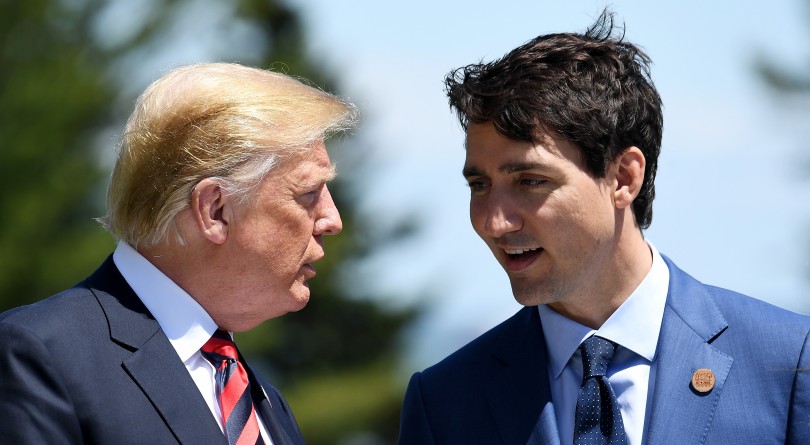 What began as a trade skirmish over Donald Trump’s imposition of a 10-per-cent tariff on Canadian steel and aluminum is now clearly a trade war. The miasma is only just lifting from the G7 summit in Charlevoix, Que., in which a Justin Trudeau press conference over a spiked communiqué sparked a Trump tantrum.

But the war’s final battle will not be the tariff that our government has already imposed in retaliation on American pizza, whisky, mattresses, coffee, et cetera—in fact, our tit-for-tat tariffs have only caused the White House to double down and promise even more tariffs against Canada soon. That means that Canada’s symmetrical retaliation is not working—and if we do not rethink our strategy now, we could soon be inside a tornado-like spiral of escalating tariffs, causing rising prices, sinking economies, and growing joblessness on both sides of the border.

If we are not to let the bully win, Canada must find an asymmetrical way to retaliate in this trade war. One that destroys American resolve, but spares us—or even benefits us. But how?

There are several ways, but Canada should consider—and threaten—expropriating American pharmaceutical patents.

Pharmaceutical patents are ultra-valuable assets. Whoever controls a drug’s patent has the exclusive right to make and export that drug. With typical drug prices growing an average of 12 per cent annually, and with certain specialty drugs priced over $500,000, controlling the right pharmaceutical patents is like having several gold mines.

But what makes pharmaceutical patents ripe for retaliation is the vulnerability of America’s pharmaceutical industry. Six of the world’s top ten pharmaceutical companies are American. No industry throws more lobbying dollars around Washington—more than the banking, defence, and automobile industries combined. Any trade retaliation aimed at pharmaceuticals certainly will be felt on Wall Street and heard in the White House.

Canada has already expropriated pharmaceutical patents in the past: The federal government did so hundreds of times in the 1970s and 1980s, but stopped because of the 1988 Canada-U.S. Free Trade Agreement, which later inspired NAFTA. Now that the White House wants to back out of our trading relations and NAFTA too, it is fair to revisit that decision.

Thanks to an obscure twist of world trade law, doing so is perfectly legal, too. In the years since NAFTA, developments in international law have made expropriation of pharmaceutical patents easier and less risky than ever. Between 1998 and 2005, at the height of the HIV/AIDS crisis, the World Trade Organization cobbled together special rules making it lawful to “compulsory license”—or, essentially, expropriate—pharmaceutical patents. The rules allow Canada’s government to authorize Canadian companies to copy patented drugs controlled by U.S. companies. There is no need for an AIDS-like health emergency, so long as certain manageable procedural steps are followed. Further, those procedural steps can be shortcut “to remedy a practice determined after … administrative process to be anti-competitive”—likely an easy determination for President Trump’s bogus claim that aluminum and steel tariffs are needed for national security.

Once granted, a compulsory license leaves Canadian firms with the right to copy, sell, and potentially export the targeted drug, at the expense of a U.S. firm who is compensated only pennies on the dollar for the lost value of its patent monopoly. The White House would be left furious by Canada’s decision, but it would be without legal recourse.

There would be several advantages to this move. Macroeconomically, compulsory licensing would mean growth for the Canadian pharmaceutical industry, and decline for the U.S. pharmaceutical industry. Microeconomically, it would mean cheaper drugs for Canadian households, once the American companies’ patent monopoly is broken. From a domestic policy angle, it would mean billions of dollars of savings for Canada’s publicly-funded Medicare system.

And most importantly, diplomatically, it would mean unleashing the most powerful industrial lobby in Washington to beat up the White House on our behalf.

Normally, I wouldn’t advocate for compulsory licensing. Throughout my career, writing public health and legal reports for the United Nations, I have been skeptical of it, because there are almost always better ways to obtain drugs cheaply than snatching patents. But in a trade war, that’s beside the point. Winning means using economic and political power to intimidate and injure your opponent while staying legally onside yourself. The asymmetrical warfare of pharmaceutical compulsory licensing would be unsurpassable for that.

Just look at the threat posed by a precision offensive of Canadian compulsory licensing. For the American pharmaceutical industry, which claims to be worth USD$1.3 trillion to the American economy, picking off its most profitable drugs poses a near-existential threat, because once Canada shows how to unravel patents, other countries will copy us. There would also probably be no greater disaster for the White House’s trade agenda, which has made a priority to demand stronger pharmaceutical patent protection fromCanada, Mexico, the EU, China, India, Japan, and elsewhere. If Canada started with the drugs of Eli Lilly and Company, say—headquartered in Vice President Mike Pence’s home state of Indiana—fear would set in quickly.

With President Trump intent on trashing America’s allies and wrecking the postwar trade order, Canada has reason to threaten compulsory licensing and show the White House where its folly will lead. Republicans and Democrats benefit about equally from the pharmaceutical industry’s campaign donations, so a credible outcome would be that the industry lobbies furiously for a bipartisan agreement in Congress overriding President Trump’s misbegotten tariffs.

In short, this strategy would inflict far greater agony on the White House, at a lower risk, than retaliatory tariffs alone—and boost Canada’s economy and health care system while it was at it.

Expropriating pharmaceutical patents sounds like a significant, hardball play—and that is what it is, undeniably. But as huge as the impact would be, it wouldn’t permanently damage relations not just because Canada has made this threat before—a 2001 ultimatum over anthrax drugs—but because the threat would never need to be enacted. Congress would intervene, thanks to the ferocious pharma lobby, and relations would return to normal.

And remember: that free, global trade has kept the peace for decades by making customers of former enemies who once fought real wars. We cannot afford to forget that a hard-fought trade war is conservative and preferable in comparison.