Opinion: The tactics may be deceptive, but the Conservatives' efforts to build a counter-narrative against Justin Trudeau is all part of the broader plan 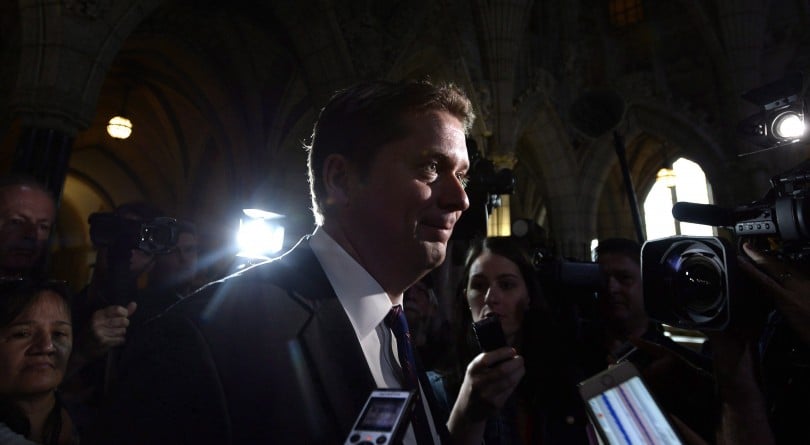 Conservative leader Andrew Scheer makes his way past reporters as he leaves a caucus meeting on Parliament Hill in Ottawa on Wednesday, June 13, 2018. (Justin Tang/CP)

As far as partisan attacks go, IsJustinTrudeauOnVacation.ca—a website “authorized by the Chief Agent of the Conservative Party of Canada”—isn’t exactly a killer. If the withering response from the Ottawa Twitterati is any indication, the site is stillborn, incapable of securing passage from even the wettest of paper bags. And while we’re at it, what’s all that racket from Conservative leader Andrew Scheer about a swing set for Trudeau’s country residence at Harrington Lake? Why did Scheer use the last Question Period of the session to bang on about kiddie toys instead of NAFTA, or carbon taxes, or equalization, or other issues that pundits love but ordinary people struggle to get exercised about?

Whoa, whoa, not all at once. There are no bonus points if you’ve already figured out the Ottawa Twitterati isn’t the target audience, and that those weighty subjects, while of prime importance, aren’t exactly top of mind for “everyday Canadians.” Still, the question remains: do the Conservatives have to be so stupid about these things?

What’s the point of including the Prime Minister’s official trips to places like India and China on their list of “vacations” by the Prime Minister? Even us yobbos who don’t follow politics know Trudeau was there on government business, just like we know he was in Quebec for Saint-Jean-Baptiste Day, despite the site’s claim that this counts as a vacation. And shouldn’t the Conservatives be seeking to educate voters about the issues that matter, instead of prattling on about the amenities at the Prime Minister’s second official residence? I mean, doesn’t Scheer live in a taxpayer-subsidized house, too?

How you answer those questions will depend on where you place the emphasis in the role of the Official Opposition. Is it to hold the government to account on the intricacies of government business? Or is it to position itself to win the next election? Idealists like to believe it’s always both together, but more often than not, it’s one or the other. And when that’s the case, parties often choose the latter over the former. But while that’s a good or bad thing depending on how you read this Rorschach test, this particular strategy—which feeds the election-victory aim through deception—this strategy does make some sense heading into the summer.

As per an esteemed columnist who trashed the opposition’s approach, the Tories have already made their points—loudly and repeatedly—on the government’s business. They think Trudeau is losing a grip on the NAFTA negotiations; they H-A-T-E carbon taxes; they think the government slipped one past them by reimposing the old settlement on equalization. Moreover, the majority government they oppose has already flashed two fingers to the neck and indicated there will be no change in their approach to any of those files. Banging on about it is just wasted breath.

Better, then, to focus on what can change, starting with people’s perceptions of Trudeau. So that’s why they’re betting big on swing sets and vacations. After all, it’s summer. School’s out. What are John and Jane Q. Citizen about to do? Go on vacation, or sit in their backyards and grill while the kids play on their swing sets. In other words, they’re going to be spending their hard-earned money on the things Trudeau is also spending their hard-earned money on. It might just be a line of attack that resonates.

And while it turns out that Scheer, having relied on CBC reporting that first indicated the National Capital Commission (NCC) had splashed out $7,500 for Trudeau’s swing set, erred on how the swing set was funded—Trudeau is paying himself, although it took a week for that fact to find the public domain—it doesn’t invalidate the impression he’s trying to leave with Canadians: Trudeau is the kind of guy that spends $7,500 on a swing set. Ninety-nine-point-nine per cent of Canadians—including the Scheers—don’t. A quick check of Canadian Tire’s website shows most sets are a few hundred bucks, with the most expensive on offer being a shade under $1,600, which is still $200 less than what the NCC (i.e. the taxpayer) ended up paying to install Trudeau’s posh set.

It’s absolutely fair game for the Tories to point out that Stephen Harper didn’t spend on extras like swing sets, saunas, and ski trails while ensconced at Harrington Lake. Scheer is saying he wouldn’t either. Trudeau, on the other hand, is welcome to defend his different approach to the amenities of life.

The Tories are guilty only of trying to build a (counter) narrative. A guy like Trudeau who spends $7,500 on a swing set and an untold amount on a sauna (while sticking taxpayers with $4,368 of installation costs), puts two nannies on the state payroll (after repeatedly saying rich families like his didn’t need childcare help from the government), and jets off on an private-island vacation that cost taxpayers $215,000 and which the ethics commissioner later found broke the law isn’t a credible symbol of the “middle class,” even if Trudeau’s government claims to be their champion.

And ultimately, the same motive animates the rather limp vacation website. The Tories have pegged Trudeau as all image and no action. They reckon people hearing the words “Trudeau” and “India”—even if it’s in the combination of “Trudeau’s trip to India wasn’t a vacation, stupid”—will evoke memories of the Prime Minister’s disastrous trip, which was so short on results and long on gaffes and photos that it might as well have been a vacation.

That said, it would be have been nice for the Tories to have accepted their win on Trudeau’s illegal and costly vacation gracefully. A tatty website full of lies opens them up to unneeded criticism. And the media and government are, of course, well within their rights to point out the site’s mendaciousness. But doing so only invites more attention—and that’s why the Liberals certainly won’t be raising it as they race into their summer vacations.