Why the gender pay gap is everyone’s problem

Opinion: It's time for proactive pay-equity legislation to produce a collective solution to Canada's collective issues around the gender wage gap 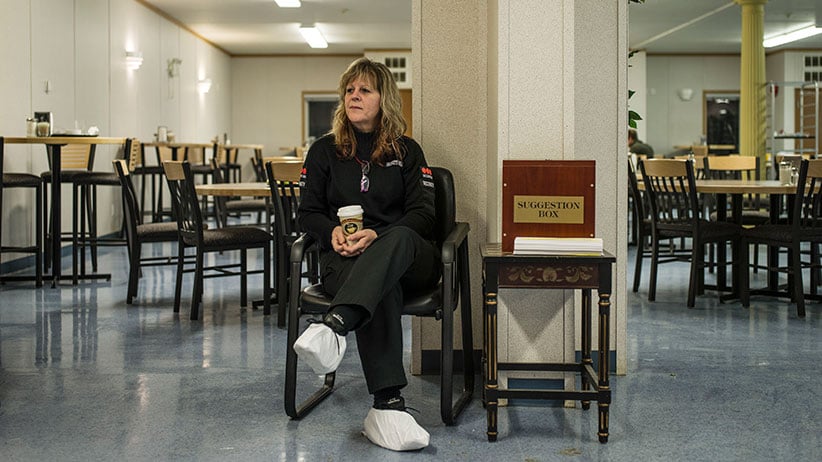 Thirty kilometres north of Fort McMurray is the Black Sand Camp, a workers’ camp. Eighty-three per cent of the population are men. A room, with a shared bathroom, costs $200 to $250 per night. (Philippe Brault/Agence VU/Redux)

Kate McInturff is a senior researcher at the Canadian Centre for Policy Alternatives.

There’s this curious thing that happens when it comes to discrimination: we look to the victims of that discrimination to fix it. This strikes me as being about as useful as asking people to stop walking around with wallets so that we can prevent pickpocketing. When it comes to the gender pay gap, women are told to be more assertive, choose higher-paying jobs or, as the CEO of Microsoft suggested, leave it to karma.

How has that worked out? Well, in Canada, the gender wage gap has barely budged in a decade. Last year, women  in the core working age of 25-54 working full-time over the full year earned 82 per cent of what their male counterparts earned—an improvement of 2.5 points over the wage gap ten years ago, according to Statistics Canada. At this rate of change, it will be nearly a century before the pay gap is closed. So much for karma.

During the last election, one member of Parliament suggested women just needed to take up those high-paying jobs in the extractive industry—you know, driving the big rigs. Setting aside that the oil and gas industry has one of the biggest wage gaps of any sector (think a 32 per cent discount on women’s wages), I can’t help thinking of the story of one keen young woman who put in the time training in the trades. She landed one of those high-paying jobs. But when she showed up for work she found that the only way onto the factory floor was through the men’s locker room. Awkward, no?

Asking women to change their behaviour or their occupation, rather than addressing the source of the discrimination, is not only unfair—it just doesn’t work. It’s not their locker room. More to the point, this isn’t an individual problem. It is a collective problem that requires collective solutions.

Why is this a collective problem? Canadian households are now struggling with record high household debt. Many of those households have both men and women in them. Think about what it would mean to the family budget if the working woman in that home was contributing a pay check that was 18 per cent bigger. And the economy? If the core working-age women who worked full-time last year earned the same hourly wage that their full-time male counterparts earned, they would have taken home an additional $85.4 billion. That’s nothing to sneeze at.

It is little wonder then that governments at all levels are starting to try to tackle the problem. Some, like Quebec, have legislation that actually focusses on employers and holds them responsible for demonstrating that they are working to narrow the pay gap in their workplaces. The federal government recently held a series of hearings on the issue and their report is clear: proactive pay-equity legislation works. The Trudeau government has promised to table pay-equity legislation later this year.

But why wait? Employers, gentlemen, here’s what works: tracking and transparency. You can’t fix a problem if you don’t know you have it. You think you’re a good employer. There’s no problem. But maybe just check. Several universities in Canada have done this on their own initiative. Guess what? There was a problem after all. McMaster University, for example, found that they were paying their female faculty an average of $3,000 less per year, even after correcting for experience, rank, publications, and awards. And you don’t need a Ph.D. to know what to do next. Yes, that’s right: they raised those professors’ salaries.

Oh, but that’s so expensive—can we afford this? Yes again. Not only does this mean better employee retention—because, you know, Ginger likes to feel like her work is being valued as much as Fred’s—it also hasn’t capsized even smaller businesses. In Quebec and Ontario, where there is proactive pay-equity legislation, the average cost to private sector employers was an estimated 1.5 per cent of payroll. Add to that the cost savings from employee turnover and the fact that as an employer you are going to start looking a whole lot more attractive to the most skilled female workers in your sector, and it’s looking like a win-win to me.

So let’s stop picking women’s pockets. We can do it together. Trust me, it’s worth it.