Why the ISIS threat lives on

Ahmed Sahi: The terror group is being defeated on the battlefield in Syria, but so long as its social media propaganda spreads, it will remain a powerful force 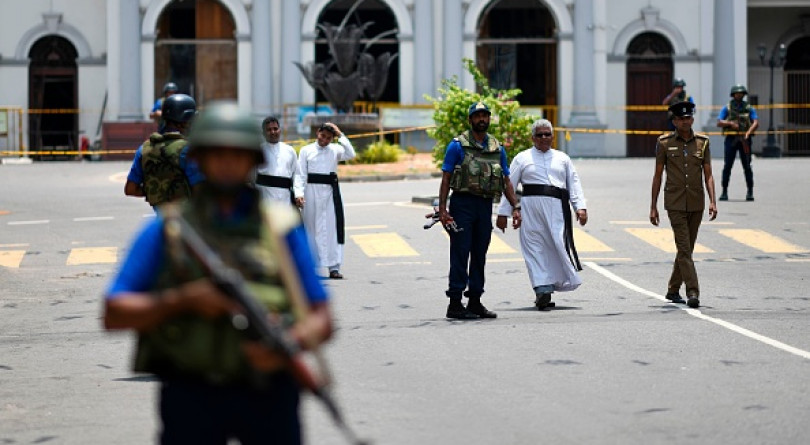 Priests walk on a blocked street as soldiers stand guard outside St. Anthony's Shrine in Colombo on April 25, 2019, following a series of bomb blasts on Easter Sunday in Sri Lanka. (JEWEL SAMAD/AFP/Getty Images)

Earlier this month, with most territories held by ISIS having been overtaken by the Americans and their allies after a long and drawn out conflict, U.S. President Donald Trump declared the war against ISIS “100 per cent” won, and that ISIS’s reign of terror was now on its last legs.

Not long after, national security adviser John Bolton, quickly responded by telling American media outlets “the ISIS threat will remain.” And crashing back to reality we came.

As deflating as it was, unfortunately, that made a lot more sense. Why wouldn’t the threat of ISIS continue, when its driving force remained? That driving force is the ideological allure of ISIS, and its evangelization of a glorified “holy war” against the forces of tyranny—a cause for which the sacrifice of one’s life is the ultimate achievement a young man (or woman) can aspire to.

Regardless of how weak ISIS becomes territorially, or how much it has been damaged physically on the battlefield, the true threat of ISIS lies in the proliferation and staying power of its ideology and ability to indoctrinate youth all over the world.

This week, ISIS claimed responsibility for the horrific Easter Sunday bombings in Sri Lanka that killed at least 250 people. The tragedy in Sri Lanka only further underscores just how widespread and deep ISIS’s influence runs globally and how quickly it can shift its focus.

Ultimately, the war against ISIS is less about the the guns, bullets, bombs and territory won or lost than it is about the battle for the hearts and minds of young people—young people both in the West, who are influenced by ISIS’s propaganda via the power of social media, and also the youth in the lands of Syria, Iraq and beyond, who have essentially grown up over the last 15 years (starting with the 2003 invasion of Iraq) witnessing foreign western powers bomb and kill people all around them. This is, in many ways, the Jihad Generation.

The U.S. State Department reported that the intelligence community estimates “in excess of 40,000 total foreign fighters” have gone to the conflict in Syria. They come from over 100 countries, with the United Nations estimating similar figures. The Russian Defense Ministry estimated that nearly “25-30,000 foreign terrorist mercenaries are fighting” for ISIS alone.

A July 2018 study by the International Centre for the Study of Radicalisation (ICSR) at King’s College London, concluded that while 18,852 came from the Middle East and North Africa, a staggering 13,156 came from Europe, with 753 from the Americas and Australia. This shows the massive influence and global pull of ISIS, not only as a terror group, but as an ideological movement without borders; a force that is able to mobilize tens of thousands of people across the world.

ISIS was able to leverage the very powerful ideological peg of a Caliphate as a rallying force to bring together Muslims from many different sects and countries under the common banner of “fighting for the cause of Islam” (however misguided that is).

But from the outset, ISIS has also had an unprecedented advantage over any other violent ideological movement of the past, in having the seemingly infinite power of the internet and social media networks at its disposal.

ISIS has used social media with stunning efficacy to proliferate its brand and ideology, even right here in Canada. Martin Couture-Rouleau, Andre Poulin, Aaron Driver, Michael Zehaf-Bibeau, the infamous Abu Huzaifa (subject of the New York Times podcast “Caliphate”), Muhammad Ali. All of these young men were a product of ISIS’s ability to use social media as recruiting tools to radicalize.

Granted, western governments are making efforts to counter the threat. In Canada, for example, the government has dedicated $35 million toward a new unit to counter extremism and radicalization. But the sheer scale of ISIS’s global online operation has dwarfed such efforts up to this point.

According to a study commissioned by the BBC, data from 2018 shows that ISIS posted an average of 616 media items online per month (through all of their various social media channels) from January to September, with a sharp upward trend with each passing month. It peaked with an output of 894 media items (claims of attacks, pictures, videos, etc) in September.

According to Scientific American, a study conducted by the Counter Extremism Project (CEP) found that ISIS is leveraging YouTube for massive propaganda outreach. ISIS members and supporters uploaded 1,348 YouTube videos, garnering 163,391 views between March and June of 2018. The videos that were tracked by CEP were posted by 278 different accounts, all of which were allowed to continually post videos, even after having previous videos deleted for violating YouTube’s terms of use.

So while the U.S. and the western coalition are defeating ISIS on the battlefield in Syria and Iraq, ISIS has turned the war on its head, and carried out a full blown information war that the U.S. has simply not been able to keep pace with. The online front, and the battle of ideology, is where the U.S. and the western coalition are seriously behind, and this is why the ISIS threat remains.

And it will remain as long as ISIS’ ideology, global recruitment methods and rhetoric are able to inspire youth toward a falsely glorified jihad that creates a sense of purpose and destiny. That is the true power and threat of ISIS. That is the root problem and everything else—the bullets, the bombs—comes after.