Andray Domise: White youth accused of crimes are draped in the innocence of childhood. Why Black kids are offered no such empathy. 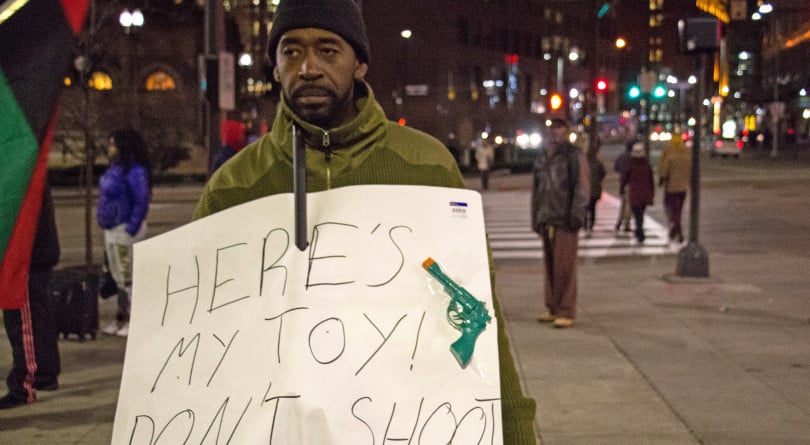 A man holds a sign in Cleveland, Ohio, on Nov. 25, 2014, referring to the fatal shooting of 12-year-old Tamir Rice (Jordan Gonzalez/AFP/Getty Images)

For a very long time, I’ve been of the mind that corporal punishment is detrimental for Black children, and should be discouraged. Many in the Caribbean community would likely disagree; spare the rod, spoil the child is an axiom I learned from elders long before I first read its source quote in the Book of Proverbs. But it never sat well with me that Black children, faced with a world that would capriciously limit their opportunities, fling them into the maw of the criminal justice system, and justify their murder at the hands of police and vigilantes, should come home—their only refuge against a world that fears and misunderstands them—only to be faced with more harsh discipline.

In her recent book Spare the Kids, journalist, anti-spanking advocate and Morgan State University professor Dr. Stacey Patton draws a solid line between corporal punishment and the violence of western colonialism, slavery, and genocide. The harsh treatment of white children endemic in Europe, Patton argues, gave way to a widespread belief in the innocence of children that stigmatized use of “cat-o’-nine-tails, shovels, canes, iron rods and sticks” in the 19th century.

In place of such punishment, which often resulted in infanticide, and wasn’t prosecuted for a long time, came the manual discipline we refer to today as spanking. “In other words,” writes Patton, “white people began to recognize the vulnerability of their own children and had to rescue them, if only partially, from this unthinkable close proximity to blackness and the brutality of childhood.”

MORE: A mysterious sighting in the Manitoba manhunt—and then the trail goes cold

For the African-descended and Indigenous people of the Americas, regarded as the most savage and therefore childlike members of the human race, the concept of childhood carries a much different import. All punishments allotted to them—floggings, rape, torture and murder—were not considered wanton violence, but instead the loving attempt of the white patriarch to drive savagery out of their bodies and instill the values of civilization. This belief, that Black and Indigenous peoples must be refined through the disciplining of their bodies and minds, has lingered in the white psyche long after the emancipation of Black people, and the recognition of Indigenous sovereignty.

It is a belief that white people, as humanity’s patriarchs, have a responsibility to discipline humanity’s children.

This belief is why the words “boy” and “girl” can become slurs when they slide off the white tongue, directed at grown adults. Meanwhile, our children are stamped from birth with the stigma of maturity; plenty of studies exist to show that our children are viewed as older and less innocent by teachers, police and other authority figures who are, by the oaths they take and the titles they wear, supposed to be children’s protectors.

This has tainted racialized communities with a social paradox that quickly ages children out of childhood in order to strip from them the aegis of innocence, yet also infantilizes our adults in order to subordinate them to white hegemony. Thus, acting in loco parentis, the brutality visited on racialized adults and children alike by authority figures—our schools, police, court systems—is not seen as cruel and unjust violence, but instead as a form of socialized corporal punishment, birthed by colonialism and nurtured institutions—our political class and mass media.

MORE: The making of a Black man

The acceptance of this socialized corporal punishment, by white authority figures, is why Eric Casebolt (then a McKinney, Texas police officer) can throw a Black child through the air, drag her by the hair, and slam her to the ground, and not only will he not be charged with a crime, a prominent white news anchor will comment “The girl was no saint, either.” It’s how former Cleveland police officer Timothy Loehmann can jump out of a police cruiser and summarily execute 12-year-old Tamir Rice, and have his actions covered by a municipality that blames Rice for failing to “exercise due care to avoid injury.” And it’s also how an all-white jury can acquit Saskatchewan farmer Gerald Stanley of second-degree murder, even after Stanley admitted to aiming a handgun at Cree youth Colten Boushie and pulling the trigger.

Spare the rod and spoil the child. If there is no child to be found behind those savage eyes, then put down a threat.

On the other hand, white youth who commit atrocities in the name of white nationalism are not only draped in the innocence of childhood from birth, but are covered by its long tails into adulthood.

Consider the case of Kam McLeod and Bryan Schmegelsky, two young white men from Port Alberni, British Columbia, who are currently the subjects of a nationwide manhunt. Early on, when their disappearance shifted from missing teenagers to murder suspects, news media continued referring to them as “teens” and uncritically ran pull-quotes from community members who called them “boys.”

To be clear, these “boys,” 18 and 19 respectively, are not only prime suspects in the murders of three people, but Schmegelsky is alleged to have uttered violent threats to his classmates, and to have a fascination with neo-Nazi imagery and organizations. Yet, their families have been offered uncritical coverage in Canadian news: McLeod’s father describing him as “kind, considerate and caring,” and Schmegelsky’s father describing his son as “a child in some very serious pain.”

Not long after McLeod and Schmegelsky’s alleged killings, 19-year-old Santino William Legan, of Gilroy, California, armed himself with a legally purchased AK-47 variant rifle, and opened fire at a local town festival. Three people were killed, two of them children, and another 12 people were injured by gunfire. Though Legan was himself killed in a shootout with police, and was found to have posted links to a white supremacist manifesto on one of his social media pages, he was—rather amazingly—described in a tweet by South Carolina-based The Greenville News as “a quiet teen who stayed out of trouble.”

The infantilizing and innocence-jacketing of white murderers and murder suspects is part and parcel of a long tradition; the childhood of New Zealand mosque shooter Brenton Tarrant (aged 28) was given an extensive profile by Australia’s The Daily Telegraph, Dylann Roof (aged 21) was described as a “sweet kid” corrupted by “internet evil” in coverage after his arrest, and was even brought a Burger King meal by police while in custody. Twenty-two-year-old Santa Barbara shooter Elliot Rodger’s “happy childhood” in England was covered by The Guardian, and it took years to debunk the myth that Dylan Klebold and Eric Harris, the mass shooters at Columbine (aged 17 and 18 respectively), were lonely kids retaliating for a lengthy history of being bullied in school.

Rather than harsh social discipline, young white men who commit these heinous acts are faced with a society endlessly devoted to making sense of their crimes. Behind that, I believe, is a motivation to understand how white children brought up according to plan, and kept safe from exposure to socially corrupting elements—drugs, crime, pornography—could regress so drastically from civilization to savagery. Racialized children, on the other hand, are born into stigma and need no such understanding or explanation. Their already and always existing predisposition for delinquent behaviour requires purging from their bodies, and if they happen to be injured or die in the process, well, they should have exercised due care.

I have no doubt that, when Schmegelsky and McLeod are finally apprehended, plenty of coverage will be devoted to figuring out where these young men went wrong. I also have no doubt that, even in the face of glaring evidence that white mass shooters are working from a well-established ideology that requires the removal—if not extermination—of non-white races for a harmonious society, plenty of coverage will be devoted to missing that point.

What I do doubt, however, is that the broader conversation on mass killings will land on the relationship between white supremacy and the power it grants white people (white men in particular) to inflict brutality on others, as well as the logics to justify it.  The social agreement to infantilize spree killers after they’ve passed into adulthood is only one factor in a broader environment of racialized patriarchy; one that warps them in to believing they are acting as soldiers in a race war, and every murder they commit, even against other white people (whom they often deem to be enablers of race-mixing and demographic replacement) is a swing of the rod for the good of society.

And this is why I believe corporal punishment inside the home to have such a damaging effect on Black children. A world which grants them no childhood, no innocence, and no protection from physical harm against the people who believe they are entrusted with the responsibility to purge the world from the perceived savagery of our races, well, that’s a harsh enough world already. At the very least, they should find safe shelter from that world with their families, and inside their homes.