Why we should talk about masculinity more often

On issues like friendship, loneliness, and education, it's vital for men to openly interrogate masculinity's core precepts, writes Tabatha Southey 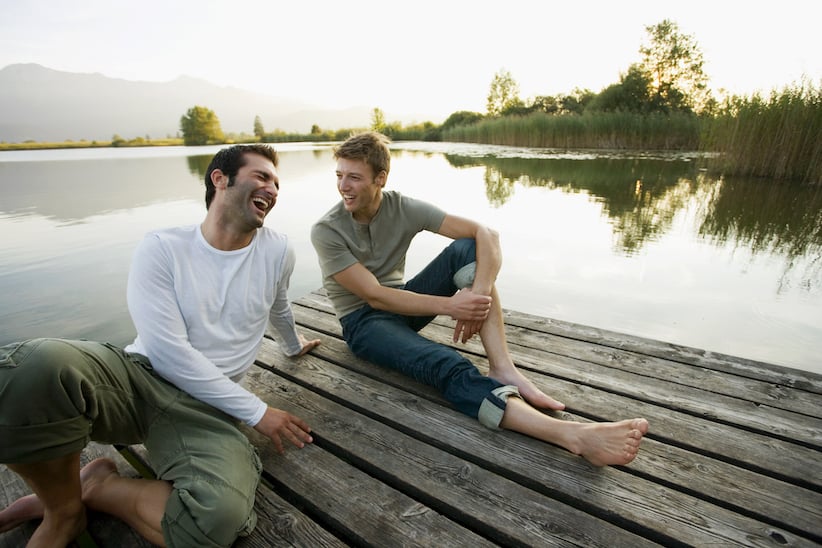 But there were also more serious, important revelations. The survey also showed that, when asked, 45 per cent of men ages 25 to 29 reported often feeling lonely, which made me wish a lot more men were being asked that question.

I cringe at the use of the word “bromance,” although I have a reasonably high portmanteau tolerance. The idea of two men engaging in an intense friendship, filled with mutual admiration and sharing their troubles and emotions with one another, shouldn’t be treated as something innately comedic: It should be celebrated. People need to confide in one another. And in the Chatelaine survey, 30 per cent of men reported that they were “encouraged” to “talk about their fears and emotions” only if it were “absolutely necessary.”

“Now listen here, son,” I imagine generations of Canadian men hearing, “to be a real man, you gotta keep it all bottled up inside unless it’s absolutely necessary. I don’t want to hear you blubbering unless there’s some kind of raging house fire and the only way to put it out is with your own tears, and you’ve already pissed on it first.”

READ MORE: Want men to support feminism? Stop treating them as the problem

A full 24 per cent of men report they were “encouraged to tough things out instead” of talking about their emotions. That’s 54 per cent of the men around you who were taught to be so butch that they can’t be Butch Cassidy to some equally lonely Sundance Kid.

Sometimes it feels as if no one really wants to talk about men’s mental health until some (generally perfectly reasonable) complaint gets made by women, and then those struggling men are suddenly brought up as if to prove a point, only to be put away again just as abruptly. The idea that we could discuss men’s depression and suicide rate independently of sticking it to the ladies when they bring up, for example, being sexually harassed at work, seems to be largely unconsidered.

I want this in the same way I want someone in a Facebook discussion to raise the issue of deaths and injuries on construction sites outside of the context of responding to an article about women asking for pay equity. Workplace safety is really important, but exactly zero studies have shown that universities giving lower salaries to their women faculty members reduces the incidence of hand injuries experienced by machinists.

We could also talk about about boys in education and the struggles they face in a way that doesn’t suggest there are a finite number of spots in grade 11 and girls are tripping boys at the door, running in and taking one of the rationed desks. The idea that school has in the last few decades radically shifted to become more boring or “feminized,” and that consequently boys are now walking out in droves from what was once their second home, is staggeringly ahistorical and amathematical.

First of all, school has pretty much always been boring, as reported with an almost journalistic eye by William Shakespeare, who wrote of “the whining school-boy, with his satchel/And shining-morning face, creeping like snail/Unwillingly to school.” This poor lad, whose pain I feel, was not even the first in a centuries-long line of reluctant school children. “Love goes toward love as schoolboys from their books/But love from love, toward school with heavy looks,” Shakespeare also wrote, because, no doubt, the “school sucks” theme was resonant with his audience even then and, by the way, women aren’t happy to be bored either. Also, women have pretty much always done better at school than men, long before the Imaginary Institute of Girly Things and the Department of Cooties were allegedly opened, wrecking everything.

Secondly, both sexes attend university at far higher rates than ever before—women just do so at slightly higher rates than men. However, as a University of Guelph study by Louis N. Christofides, Michael Hoy and Ling Yang shows, this is because post-secondary education offers a better return on investment for women than it does for men. This is not because women earn more than men but because the opportunity cost men pay in attending university is higher; men’s unskilled labour is more valued. Another way to look at this is that a lot of men may be doing something quite sensible when they leave school to go to work, and rather than wringing our hands over their choice, we might need to find ways to welcome men back to school, without shame or judgement, at another stage in their lives. Getting men back to class may require (as students will tell you) divorcing notions of self-worth from net worth, shedding one of the core precepts of masculinity, one as confining as so many of the others.

We know that boys are often taught that they are what they earn. Indeed, 48 per cent of the men Chatelaine surveyed said that growing up they believed “being a man” meant “being a breadwinner.” The pressure to get on with that aspect of manning-up can be high, particularly for those from a low-income background, as can the costs. So many aspects of a self can get shut down or go unexplored in the service of a version of masculinity we’ve invented and given precious little nuance.

Neither the issue of boys wanting to leave school or having to leave school can be separated from issues of class and race, either, which impact a boy’s educational experience at every level, every day. We also know from Stats Canada that “dropouts differed significantly from other youth with respect to how much importance they felt their parents placed on graduating from high school and obtaining more education after high school.”

We need to look at those outside influences and see how we can level that playing field. But treating education—or most of the issues we face as a society—as a zero-sum game being played between the sexes, as has become the fashion, isn’t helpful.

READ MORE: Why do men make more than women?

Mostly, I’m just confused when people complain about the recent “feminization” of education as the cause of cause of men not pursuing higher education. Were there chapters of Brideshead Revisited I missed where they suddenly stopped picnicking and punting and just spat and bludgeoned each other with sledgehammers for a spell? Certainly there was that one time that Boy Mulcaster and some others tried to throw Anthony Blanche into a fountain, but he jumped in himself, “struck some attitudes, until they turned about and walked sulkily home…”

Brutal stuff, but they all had to have a sherry afterwards. The beloved teddy bear in Brideshead, Aloysius—the model for whom was Archibald Ormsby-Gore, Sir John Betjeman’s teddy—was perhaps part of the nuance we’ve been rejecting for our boys and men that they may just demand, in a manly way, to have back, thanks very much.

I urge you to take a look at the Chatelaine survey, and also to watch some of the accompanying videos. These are men I recognize, and not just Justin Trudeau who, when asked about his insecurities, tells a story about a turtleneck that just about everyone raised by a knitter will be able to relate to with a smile (13 per cent of those surveyed expressed insecurities about their fashion sense). I recognize the sheer gorgeous, glorious variety of the men being interviewed, and the way many glance and shrug and eye-roll as they sheepishly, forthrightly, humorously and bravely tell you what they were taught—but also what they have learned and hoped and wondered about being a man.