Why won't Maxime Bernier denounce the terror attack in Christchurch?

Stephen Maher: It would be a meaningful gesture to stand with Muslims against hate. The People's Party leader seems more intent on courting deluded voters. 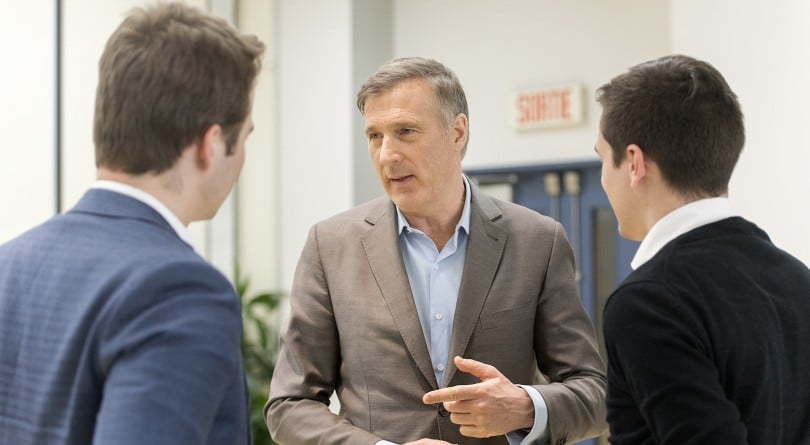 Bernier talks with supporters during a candidate nomination event for the riding of Outremont in Montreal on Jan. 27, 2019 (THE CANADIAN PRESS/Graham Hughes)

Before an Australian terrorist killed 49 Muslim worshippers in Christchurch, New Zealand, on Thursday, he tweeted photos of his rifles and cartridges, which were covered with the names of other white supremacist killers, hand-lettered in white paint.

Among the names was Alexandre Bissonnette, who killed six Muslims as they worshipped in a Quebec City mosque in 2017.

That’s a reference to the Global Compact on Immigration, a non-binding UN policy document signed by Canada and 163 other countries, which white supremacists and other opponents of immigration say, falsely, will force Canada to let in waves of undesirable migrants.

People’s Party Leader Maxime Bernier falsely described it as a “treaty,” and wrote that its “main goal is to make the migration of millions of people from poor and unstable countries a normal thing to be embraced and facilitated.”

Scheer’s 2019 campaign director is Hamish Marshall, who was an executive at Rebel Media when it sent Faith Goldy to Quebec City to “cover” the mosque shooting. She produced sickening reports that hinted that a Muslim, not Bissonnette, may have been responsible.

(Goldy was fired by Rebel after recording a podcast with Nazis. Marshall says he had no editorial role at Rebel.)

After years of sustained social media campaigns, including well-funded campaigns by billionaires opposed to Muslim immigration, and the mainstreaming of odious views in the United States, a significant, noisy minority of right-leaning voters have had their heads filled with nonsense about the Muslim threat to the West.

It is disturbing, since it follows the same pattern as campaigns against outsiders that have repeatedly led to bloody ethnic cleansing around the world, although instead of pogroms, now we have mass shootings, attacks on blacks, Jews and Muslims in their places of worship by rifle-toting white supremacists.

These mass shootings are a grim fact of 21st century life. The victims and the ideology are different from attacks by Islamist killers or incels, but the pattern is the same. Lost, isolated young men find a community online and then murder innocents in search of validation from that online community.

Politicians should try to reduce the temperature on the hot-button issues that get people agitated, but politicians rely on hot-button issues to raise funds and motivate their supporters, so we should not be surprised that Bernier is openly courting deluded and hateful voters or that Scheer appears to be taking pains not to scare them away.

As H.L. Mencken wrote: “If a politician found he had cannibals among his constituents, he would promise them missionaries for dinner.”

After the horror in Christchurch, Scheer was criticized for a tweet that said that “freedom,” not Muslims, had come under attack, as if he was hoping that the Muslim haters might not notice what he was saying.

Scheer soon released a better statement, which made me wonder what, if anything, his rival, Bernier, had said.

I checked Bernier’s Twitter feed, his Facebook page and the party web site. He had said nothing.

It seemed strange. Even Marine Le Pen, the French far right leader, had denounced the attack.

Since Bernier has been courting anti-immigrant voters, it seemed to me that he had decided to stay silent, lest he confuse the addled haters whose votes he needs if his not very successful party is to win any seats in the coming election.

So I tweeted my theory, opining that he was staying silent because he “likely wants to avoid alienating some of his supporters by expressing solidarity with the victims.”

A few hours later, he responded: “Some journalists have no decency. Did this one harass me or anybody else when dozens of Christians were massacred in Nigeria and the Philippines weeks ago? Why not? As a rule I don’t comment on these horrible tragedies in other countries. Period.”

This set off a lively exchange of insults and denunciations, with Bernier retweeting messages from his supporters and his critics dunking on him.

Bernier was clownishly vulnerable to dunking because has repeatedly tweeted denunciations of terrorist attacks, when the perpetrators were Muslims.

Since Bernier rarely spoke about immigration issues before launching his party, he looks like a callow opportunist, seeking to peel off some of Scheer’s voters by giving them messages that Scheer cannot deliver without alienating multicultural suburban voters.

Bernier still has not denounced the attack in Christchurch. And that is bad, because it would be a meaningful gesture to Muslims, especially in Quebec, where parents must be terrified to take their children to worship.

Unlike Nigerian-Canadian Christians, Canadian Muslims, like Canadian Jews, have reason to fear that they will be targeted by terrorists in this country when they are in their houses of prayer.

For that reason, it is important at times like this to express solidarity, to speak up for love and against hate, to let our neighbours know that we stand with them, and always will.

That is what decent people do.