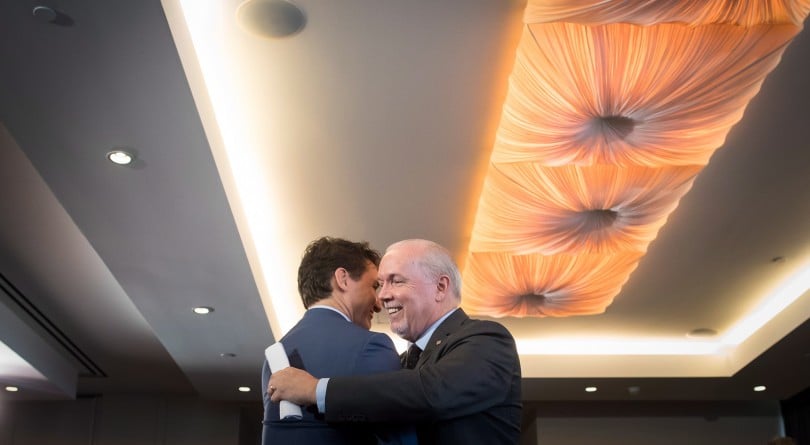 LNG Canada—a massive $40-billion project that takes natural gas from western Canada, cools it to its liquid form, and ships it to energy-hungry destinations in Asia—just got the investment green-light.

It’s good news for western Canadian gas producers facing low prices amid stiff competition from American producers. But this project will also result in more greenhouse-gas emissions in B.C., making it tougher to meet B.C.’s legislated emissions targets. After all, adding up the emissions from liquefying the gas and all the upstream emissions from production, LNG Canada represents roughly 10 million tonnes of CO2-equivalent per year. This is one quarter of B.C.’s entire greenhouse-gas budget for 2030, or two-thirds of B.C.’s 2050 target. In other words, to meet B.C.’s emissions targets and have LNG Canada, the rest of the province will need to largely decarbonize. So the LNG development seems inconsistent with Canada’s commitment to climate action.

But Prime Minister Justin Trudeau and B.C. Premier John Horgan, among others, assert that actually, B.C. LNG will lower emissions, at least globally. We have to consider emissions beyond our borders, they argue, and since climate change is a global problem, it doesn’t matter where greenhouse gases get reduced, just how much—and increasing Canada’s emissions so as to lower other countries’ emissions is a net global win.

So which is it? Well, the answer is perhaps unsatisfactory, but it’s still important to state: it depends.

It’s hard to say at this point which will be replaced. One might be tempted to look at the current mix of generation in the LNG recipient countries (China, Malaysia, Korea and Japan) to determine whether their average electricity-emissions intensity is higher or lower than what LNG can provide, but this wouldn’t be quite right.

What we really want to know is which power source, or future power source, will no longer be needed as a result of LNG deliveries. Or, in economics speak: what is the marginal source of power? Will a future coal plant be shelved, or will plans to expand renewables be curtailed?

I lean towards the former. A combination of local pressure to reduce air pollutants coming from coal and ever-decreasing solar, wind and storage technology suggest coal will be the one bumped off the future supply train. Yes, China continues to build coal plants today, but their capacity factor—how much they actually produce, which is what matters for emissions—continues to fall. Further, strong growth in the renewable sector continues.

Moreover, LNG is likely a complement, rather than a substitute, to renewable energy. Rather than around-the-clock raw energy, LNG is better suited to provide flexible on-demand capacity that combines well with intermittent energy, generating when nature is not providing wind or sunlight, or to manage peak demand periods. Instead of displacing renewables, the combination of LNG plus renewables offers the potential ability to displace more coal power, more quickly.

We shouldn’t hang our hat, however, on the idea that LNG Canada is consistent with our climate commitments just because it probably, maybe, hopefully will reduce global greenhouse gases. But I also don’t think we can ignore the effects outside our borders. After all, the reductio ad absurdum conclusion of doing so would be to stop all our emission-intensive domestic production and instead import all our emission-intensive goods. Climate change is made no better off from that result; if anything, it’s likely worse off.

Instead, Canada should focus its efforts on what we can do, while keeping in mind the global context. This means making the LNG we export the lowest emission-intensity possible, so we can outcompete global LNG competitors both economically and environmentally. This means leveraging Canada’s largely zero-carbon power grids to electrify much of the gas production, shipping and liquefaction process. And importantly, it means doing more—a lot more—to monitor and mitigate methane leaks, a greenhouse gas that’s far more potent than carbon dioxide and a potential risk of LNG.

The world is transitioning. Energy systems are beginning to decarbonize, and will need to do so more urgently to limit the harmful effects of climate change. LNG is not a long-term solution, but it is part of the transition—one in which Canada can play a part.