With abortion rights under attack, women are left to fend for themselves—and each other 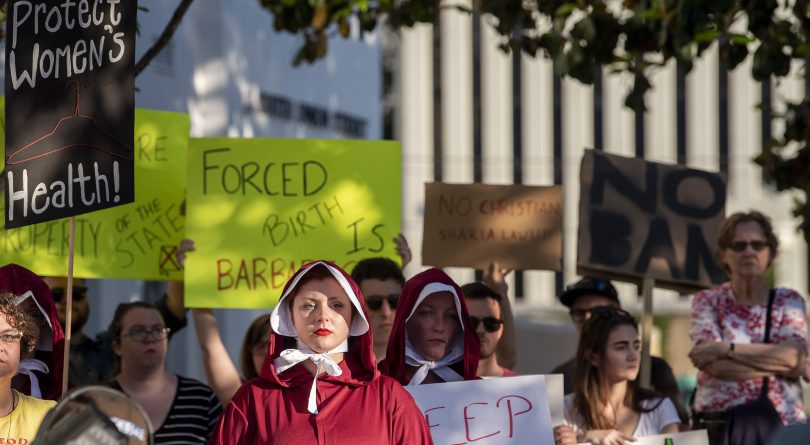 May 14 photo, Margeaux Hartline, dressed as a handmaid, joins a rally against HB314, the near-total ban on abortion bill, outside of the Alabama Statehouse in Montgomery, Ala. (Mickey Welsh/The Montgomery Advertiser/AP)

Last week a so-called, I would say creepily called, “heartbeat bill,” banning abortion at around six weeks—that is to say, before many women would even know that they were pregnant—was signed by Georgia Gov. Brian Kemp.

Early this week the Republican-controlled Alabama Senate approved a statewide ban on abortion, at every stage of pregnancy, with no exception for cases of rape or incest. Alabama’s law, signed into law by Gov. Kay Ivey, allows for abortion only if the woman’s health is at “serious risk” or in cases of “lethal fetal anomaly,” and given that Alabama doctors who perform abortions will face up to 99 years in prison, I imagine that “serious risk” exception will be used ever-so-sparingly.

One can see how that might play out tragically when a doctor is forced to make that call, and I can also imagine a lot of doctors simply choosing to practise somewhere less 1980s-Romania for all kinds of reasons when the bill goes into effect. That will have separate, bad health consequences for the state.

Alabama is already tied for fourth-worst place in infant mortality in the U.S and places second to last in life expectancy—Georgia is tied for seventh-worst for infant mortality. If baby-saving were truly the game here, they could of course have started with actual babies. But then, a sentimental preoccupation, even an outright obsession, with the wellbeing of people that don’t exist is less messy, and far less demanding, than coming to the aid of the people breathing, bleeding, pleading before you.

On Thursday, not to be out dystopia’d, Missouri’s Republican-led Senate passed a bill that effectively bans abortion after eight weeks of pregnancy, also without exception for cases of rape or incest.

To date—Dark Ages Redux AD—16 states are considering or have already passed similar laws. The endgame here is to provoke a legal challenge, take the fight to the Supreme Court and overturn the Roe v. Wade decision that guaranteed American women the right to have an abortion nearly 50 years ago.

Women who warned of this eventuality during the 2016 election, or in and around other elections, were and still are, both in the U.S. and here in Canada, largely dismissed. A women so much as hints that she fears the loss of her reproductive choice and she’ll all but be told that the issue is a bogeyman. It’s ridiculous to be scared, she’ll be chided, because sensible moderates have checked under the bed and determined that there’s no well-organized and abundantly funded campaign lurking in the darkness ready to grab any bodily autonomy left sticking out from under the covers, you silly goose.

RELATED: How Canada’s growing anti-abortion movement plans to swing the next federal election

The vast majority of Americans and a similarly high number of Canadians do not want a ban on abortion and yet there they are, dangerously close, and here we are, flirting with the same unnatural disaster.  And criminalized abortion is a disaster, whereas abortion itself is just a medical procedure that many women choose to undergo for a variety of reasons and most do not regret at all.

I have never known a woman to express much beyond relief about having had an abortion. A year later, a day later, all of the women I have spoken to about this—younger, older, from all walks of life—are all glad they did it, because they could not (sometimes for medical reasons) or did not want to have a baby at that point in their lives.

And is there a better reason to have an abortion? No, not wanting to have a baby about covers it.

Sometimes women are upset that it was difficult to get access to the procedure, and once in awhile they admit their relief at their abortion in hushed, confessional tones because they are sheepish about being perfectly at peace with their decision. Happy to have had an abortion is the “Well, whew, that’s over with!” that dare not speak its name.

I sent out a tweet this week, saddened and fearful as I was by the entirely predictable turn America has taken. I had in mind the 3,000 or so Irish women who travelled to England each year for abortions before, in a referendum held last May, two-thirds of voters opted to remove a near-total constitutional ban on the procedure. I was thinking about how Georgia prosecutors may, as it has been suggested they might, choose to charge women who seek abortions elsewhere with conspiracy to commit murder, and I tweeted:

American women are going to need a "Canadian cousin" to visit. I swear to God I will start D&C AirB&B.

Yes, I know that we in Canada have shamefully uneven access to abortion services and that, while we’re out of the illegal abortion woods, we’re at grave risk of wandering thoughtlessly back in again. I know that women who can afford to travel, and pay for an abortion, will often find a way. I know that those women, those who are able to leave their responsibilities—and close to 60 per cent of all Americans seeking abortions already have one or more children to take care of—aren’t the ones at most risk when and if these laws currently raining down on American women take effect.

I was just thinking about helping, and my spare room, and paying it forward, because a lot of women put a lot of work into securing me the rights I’ve enjoyed. Obviously a lot of people have had a similar impulse. On Thursday, over on Reddit, a network of “Aunties” offering information and assistance to women in need popped up, and by Friday morning its number of subscribers had grown to 2,800, living everywhere from America to Switzerland. They’re posting about shipping women “peanut butter,” Plan B.

It often feels of late as if the world is not just getting worse, but as if it’s getting mean and petty, as if the whole planet’s one big smirking man, flashing an ‘ironic’ okay sign ‘just to trigger the libs’ before breaking into a chant of “build the wall.”

Those posts on Reddit, the responses to my tweet, they were an antidote to that feeling. The responses came in one after the other, almost universally from people offering to help, as women have historically done when they got the call, heard the tap on their door, saw the sobbing and understood. Here are just a few of the responses tweeted back to me should you need confirmation that the energy, the pragmatism and the empathy, that beating back this backlash is going to take, is still out there. Thanks, all.

I'm in. I'm in Georgian Bay – beautiful scenery and access to some of the best hospitals.

I’m happy to be a #canadiancousin up in Edmonton! I’ll also provide cookies!

My wife and I will open a Guelph branch.

When I was a little boy my big brother would pick up American draft dodgers at the Candian border. I want to help too.

Dual citizen in Ottawa. I'm your American-Canadian cousin with a guest room, a car to drive you, and plenty of nice hot tea!

I have thought that I should do this in my extremely blue state in New England.

One comfy bed in a private room with tv,cable, & internet. Privacy or company if you want. No questions or judgement. Must be ok with cats; it’s their house.

#CanadianCousin here just west of Calgary, AB. Can drive and be support for my American sisters. Friendly cat cuddles included from Miss Maggie.

East Cost reporting for service, access to boats and the Atlantic: remember #morgantaler? I do. "You dont know me but I'm your Canadian Cousin." pic.twitter.com/pJQIirGI2y

And last but not least…

When i was 15 i had to travel to the usa alone to get an abortion. I was treated with such compassion and I've never forgotten that. In my 50s now and willing to be your aunt cousin or grandma if you need to come here for an abortion. My home is open.