With their new leader, the B.C. Liberals show they're in it to win it

Opinion: The election of Andrew Wilkinson sets out a clear message and mission for the Liberals in a muddled B.C. political moment 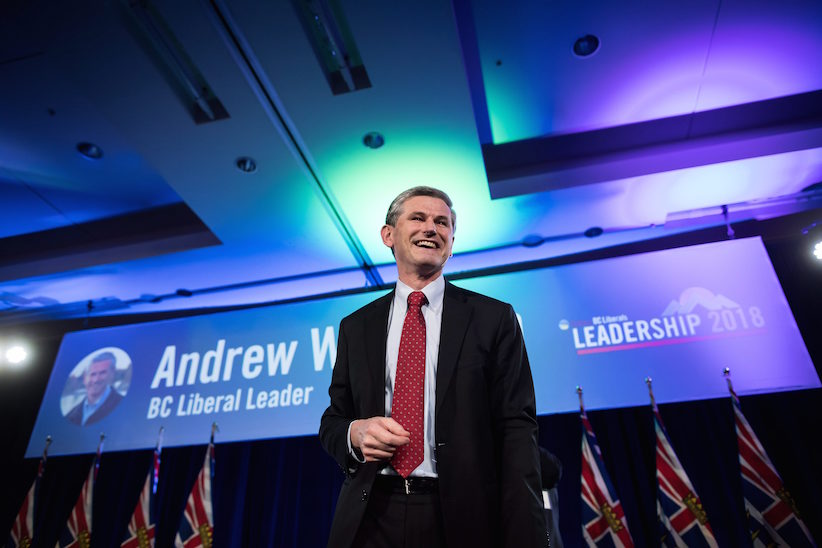 The British Columbia Liberal Party exists for one reason: to win elections. Most parties, if you ask them, will tell you the same thing: “We’re here to win!” Except no, sometimes they aren’t. Not all of them. But the B.C. Liberals certainly are. Indeed, the entire raison d’être of the party has been, for years, to bring together federal Liberals and Conservatives into a grand, stable governing coalition capable of guarding against the left (and the farther-right). For nearly two decades, it has worked.

It was no surprise, then, that on Saturday night, the party elected its new leader, Andrew Wilkinson. Meet the new boss; same as the old boss.

In the fifth round of his party’s ranked-ballot contest, Wilkinson defeated former Surrey mayor and Conservative Party member of Parliament Dianne Watts in the final count, against whom he secured 53 per cent against her 47 per cent. Before that, he outlasted four other candidates. Wilkinson was a contender to replace erstwhile premier Christy Clark from day one, but throughout the campaign, as the perceived momentum of the candidates waxed and waned, he was often ignored in light of the fanfare around Watts, the rallying around Todd Stone, and the notable surge of Michael Lee. Throughout the race, though, Wilkinson stayed in his lane—or, perhaps more accurately, drove down the centre line.

Wilkinson comes to the job with expertise, experience in politics, and an impressive curriculum vitae. First elected to the B.C. Legislature in 2013, he served in former premier Christy Clark’s cabinet from the start—right until the Liberal government fell last spring. Prior to being elected, he was a deputy minister and head of the B.C. Civil Liberties Association. He’s also a Rhodes Scholar, a medical doctor, and a lawyer. But having a remarkable C.V. and enough mental horsepower to make a yacht go doesn’t guarantee electoral success. And given that the B.C. Liberals exist to win, the only question that matters is: “Can Andrew Wilkinson lead his party back to power?”

Let’s recall that in the 2017 election, the B.C. Liberals under Christy Clark won 40.36 per cent of the vote and 43 seats—more than the New Democrats at 40.28 per cent and 41 seats. The Liberals formed government, but couldn’t maintain the confidence of the legislature. The NDP and the B.C. Greens, together, had 44 seats—enough to enable the New Democrats, led by John Horgan, to take power. The orange team was backed by a supply-and-confidence agreement with the Green team, enabling a razor-thin governing majority in the 87-seat legislature. In 2017, the Liberals lost just under 4 per cent of their support from their 2013 returns—the year in which they formed a majority government with 49 seats. All of this is to say that the B.C. Liberals didn’t implode last year. They remain a fiercely competitive party with good odds of forming government again—especially given the historical difficulty the NDP has had winning in the province.

The upcoming provincial referendum on electoral reform, if it’s successful, will complicate things. If B.C. adopts proportional representation (PR), Wilkinson may find himself struggling to keep his party—“the free enterprise coalition,” if you’ll pardon the obnoxious moniker—together. Under PR, there tend to be more parties in the legislature, since the types of systems that divide electoral returns proportionately encourage smaller parties to form and run serious campaigns since they have a better shot of winning seats. Grand, often clunky, coalitions that perform well under the current system—first-past-the-post—are less able, under PR, to leverage the electoral carrot and stick of being able to deliver the 40 per cent or so of the vote needed to form a majority government. Upon winning on Saturday, one of the first pledges Wilkinson made —a vociferous one, at that—was to defeat the PR referendum, implicitly acknowledging that a change would not only harm the Liberals, but pose an existential threat to them.

But absent a change to the voting system, Wilkinson poses a threat of his own: he’s a boring, competent centrist. Still, while he won’t inspire many British Columbians, he won’t necessarily frighten many, either. Indeed, you can draw a line from former Liberal premier Gordon Campbell to Christy Clark and straight through to Wilkinson without having to make a loop. This reflects a belief by the B.C. Liberals that their 2017 failure to form government calls for a tune-up and not a rebuilt engine. Given that, absent electoral reform, the Liberals enjoy a structural advantage in the province as a centrist (with a tendency towards the centre-right) party—capable of drawing enough support from a diverse population, often enough to hit the rather low percentage of votes required to govern—this shouldn’t surprise anyone.

But who knows? The new B.C. Liberal leader takes over at a time when NDP premier John Horgan is popular, housing affordability (on which the Liberals are weak) is on the minds of many, and the Greens are polling higher than usual. All of this could point to a realignment in the province, or it could be a fluke: a confluence of unusual (but related) phenomenon awaiting a regression to the mean. No one can say for sure. But if I were Wilkinson, I’d go with anticipating a regression to the mean, though I’d help it along.

This apparent commitment to staying the course may reflect a failure to learn from the last election. One of the mistakes Christy Clark made in 2017 was to fuse cowardice and hubris by staying the course from 2013, assuming that she could deliver another majority despite an obvious growing disaffection with the way things were going in the province during her party’s tenure. Sure, the economy was growing, but people were having a hard time paying rent or buying a home, paying for daycare, affording the medical services premium, or shelling out for transportation. Many refused to ignore the fact that resource extraction and export have environmental implications that are inconsistent with “Beautiful B.C.” Clark probably could have found the three to four per cent she needed to win a majority government by pitching a tad left. Instead, she played the hits. But Wilkinson may be able to correct that mistake—putting pressure on the NDP to distinguish itself while doing so.

The true wild card variable will be how Wilkinson is received by British Columbians. In politics, substance and form are often fused, and the genuinely extraordinary Dr. Wilkinson often comes off like a Xanax on Ambien—or worse. At times stiff, arrogant, and aloof, he is also pugnacious in a haughty way that denies him any claim to be a “fighter.” People like a “fighter,” but in the age of governing-as-style, they don’t like combative debate-society types. This way of being has nothing to do with his excellent pedigree; plenty of politicians have impressive histories, world-class education, and are, quite simply, brilliant. The ones who succeed best are those who can harness all of that while connecting with the people whom they are elected to serve. Some have been able to overcome the challenge—Stephen Harper, for instance—but it took him years and help from a then-tired federal Liberal Party. It’s not obvious that Wilkinson can do the same.

As he heads back to Victoria, Wilkinson takes with him some of the legacy of his predecessor, Christy Clark (and her predecessor, Gordon Campbell), and, with his own sensibility, he assumes the leadership of a political party that has won in the past and is expected to win once again. The Liberals in B.C. continue to enjoy a structural advantage under the current electoral system and, along with their muscle memory for crafting broadly-enough-appealing centrist platforms, they remain a serious contender to win the next election.

The unknowns make definitive predictions impossible, but they serve as a guide for the B.C. Liberals as they regroup: Where will Horgan take his new Democrats, and will he channel the late, bombastic and unabashedly socialist NDP premier of B.C. Dave Barrett? What of the rise of the Greens? How about the state of the province’s economy? What will happen with electoral reform? If Wilkinson and his party can successfully predict some of the answers to these questions—or, better yet, shape them as much as possible and competently react to them when they can’t—then keeping the faith just might work. It has before.