Women remain invisible in debates about the future of Canada

Jacqueline Hansen: I am a middle-aged single mom from rural Quebec, and I feel invisible during this election campaign 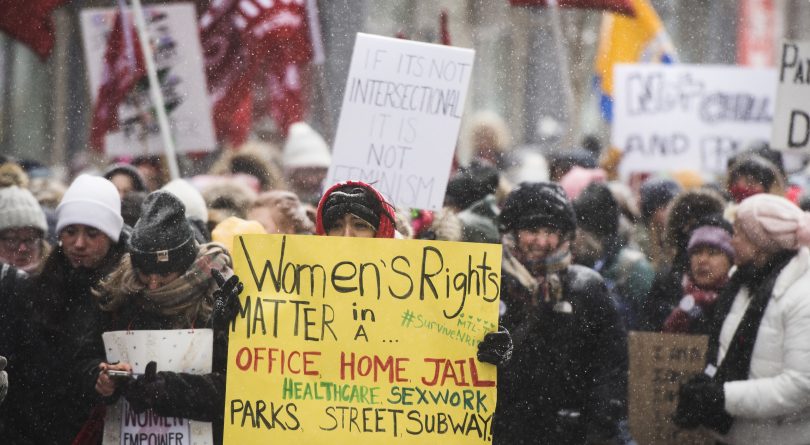 People brave the cold as they make their way towards Queen's Park during the Toronto Women's March on Saturday, January 19, 2019. THE CANADIAN PRESS/ Tijana Martin

I am a middle-aged, middle-class, single mother of a primary school-aged child, living in rural Quebec. I also happen to be a gender rights expert for Amnesty International. I have spent this federal election campaign shaking my head, baffled at how party leaders’ discourse has little connection to my life, or the lived realities of more than half of Canada’s population.

During the French-language TVA debate last week, the aforementioned men on stage affirmed they would not re-open the abortion debate. And during the Macleans-CityTV leaders debate last month, the only mention of women’s rights and gender equality came in the form of Singh’s comment to May about her position on a woman’s right to choose.

MORE: Maryam Monsef on the violence against women and girls crisis

Thank you, party leaders, for not re-opening the abortion debate, even though there’s been no groundswell of public support calling for this debate to be re-opened. If you do want to debate sexual health, the real issue is the lack of consistent access to comprehensive sex-ed and sexual health services including abortion, across Canada.

Two weeks ago, CBC launched its SMS election tool. I sent an SMS to 22222 asking “What are the party’s positions on women’s rights and gender equality?” and it responded by sharing each party’s position on abortion. This confirmed, once again, that in this federal election campaign, abortion rights and women’s rights have been incorrectly conflated.

Women, transgender, non-binary, and two-spirit people make up more than half Canada’s population. We are not a homogenous group, but I am confident that abortion rights are not the sole issue on our minds during this election.

And yet, history has taught me that I should not be shocked that women’s rights and gender equality issues are not top priority for the mostly male-identifying politicians, who are leading political parties and running for office. In fact, the last federal leaders debate on women’s issues was held 35 years ago.

But it’s 2019, and in the era of #TimesUp and #MeToo I have rightly come to expect more—and better—from politicians. This is precisely why women’s rights and equality-seeking organizations from across Canada joined forces to launch Up for Debate, a campaign calling for a federal leaders debate on women’s rights and gender equality. We know that without a specific and separate space for these issues to be discussed, they become invisible. However, regrettably, with days to go until the federal election, not all party leaders have committed to participating.

All six federal party leaders did agree to participate in this week’s English and French language official leaders debates. According to the newly formed Leaders Debates Commission, headed by former Governor General David Johnston, the debates “will help you make your own decision about the issues that matter to you. It is also an opportunity to learn about issues that matter to other Canadians, and be exposed to views that are different from your own, and those around you. It’s a window into the world of others.”

Given this mandate, I had high hopes for the official, English-language debate. But these hopes were dashed when not one single question was asked about women’s rights and gender equality, and leaders missed critical opportunities to speak to these issues in their responses. I was gobsmacked that all six leaders failed to address the gender wage gap in response to a question specifically about income inequality. This was particularly egregious given that Statistics Canada released a report just hours before the debate, stating that women in Canada continue to make only $0.87 for every $1.00 a man earns.

MORE: Why does Canada now have no women premiers? Because it’s 2019

All six party leaders have consistently failed to conduct gender-based analysis plus on their responses to debate questions. Gender-based analysis plus (GBA+) is a tool to assess “how diverse groups of women, men and non-binary people may experience policies, programs and initiatives,” according to the government’s Status of Women Canada website. “The ‘plus’ in GBA+ acknowledges that GBA goes beyond biological (sex) and socio-cultural (gender) differences. We all have multiple identity factors that intersect to make us who we are,” it continues. Those identify factors include race, ethnicity, religion, age, and mental or physical disability, among others.

Since the government of Canada has an arm of government committed to implementing GBA+ in all its work, the next Prime Minister of Canada will be expected to understand and assess how policies and initiatives will impact people of different genders. What better way for those vying to become PM to show off their GBA+ skills than during leaders debates?

When formulating responses to questions about the economy, leaders missed the opportunity to explore how Canada’s economic policies impact people of diverse genders in different ways. They missed the chance to articulate their understanding of how poverty differently and disproportionately impacts women, transgender, non-binary, and two-spirit people, and how they will reflect these diverse experiences in their poverty-elimination strategies, including the steps they will take to end the gender wage gap, and to improve access to childcare.

It should be impossible for party leaders to speak of Indigenous rights without acknowledging the National Inquiry into Missing and Murdered Indigenous Women and Girls, and without announcing what concrete actions they will take to end the violence that disproportionately impacts First Nations, Inuit, and Métis women, girls, and two-spirit people. Party leaders also failed to recognize that rates of sexual violence have remained unchanged for years, and to commit to developing a national action plan involving all levels of government, to prevent and address gender-based violence.

Considering abortion rights are not up for debate; leaders could have pivoted the discussion to share plans that ensure that every person in Canada has access to comprehensive sexuality education, contraceptives and abortion services. Recognizing that women’s shelters, other frontline service providers, and advocates working to promote women’s rights and gender equality are chronically underfunded, parties could have talked about long-term, stable funding for women’s and equality-seeking movements.

Foreign policy hasn’t been deeply debated this election campaign, but party leaders failed to articulate their vision of a feminist foreign policy for Canada. They didn’t go beyond discussions of foreign-aid funding to address difficult issues such as the contradiction of advocating for women’s rights in Saudi Arabia while selling arms to the Saudi government.

Women, transgender, non-binary, and two-spirit people in Canada lead multi-dimensional lives. We experience inequality in different forms, and to different degrees. But we do not have the same opportunities as most cisgender men, who to live in safety and dignity, free from discrimination and violence. This inequality is perpetuated when we remain invisible in debates about the future of our country. I am a middle-aged single mom from rural Quebec, and I feel invisible during this election campaign.

Federal party leaders: it’s 2019. When are you going to be up for debating women’s rights and gender equality?