Yes, this is a war. Do our leaders know what that means?

Jen Gerson: Threatening to take away civil liberties isn't enough. Mobilizing the country will require a galvanizing message—and the promise of better things to come. 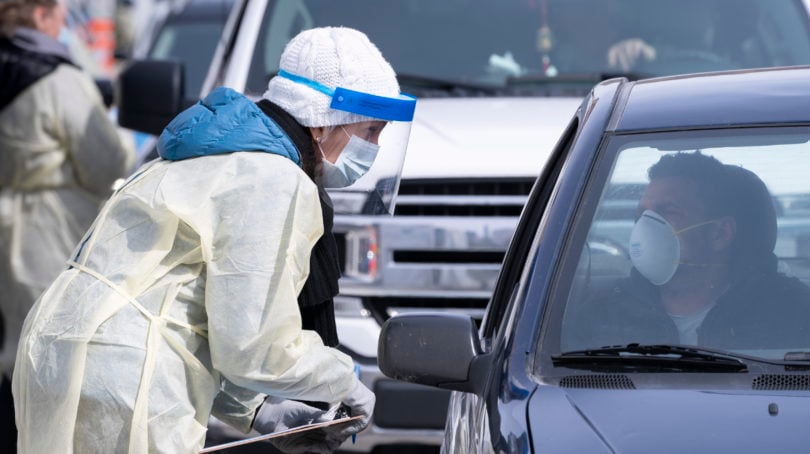 At moments of crisis, people like myself have to watch what we write. Once, my role was to offer a candid—and catchy—perspective on the world. Now I ought to provide comforting platitudes intended to soothe my readers into complacency and compliance.

Flatten the curve. Sing on your balconies. We’re all in this together. Harken back to the promise of the old golden status quo. We’re in for a tough few months, but everything will go back to normal.

But when big things like COVID-19 happen—and Sept. 11, 2001 is the only analogy I can draw from my own lifetime—there is no return to normal. There is just the beginning of a new normal. I suspect this pandemic is going to force us all into a fundamental re-negotiation of the social contract; and whether that debate leads into a better world or a worse one will depend on how we respond today.

The pandemic ahead of us is terrifying. The virus itself is insidiously canny, almost as if designed to test every thread of social cohesion. It’s deadly, but not deadly enough to frighten everyone equally. Its high morbidity rate puts a strain on already overburdened health-care systems. It has already revealed the fissures in our political leadership around the world. It’s remarkably durable and contagious; and because it appears to be able to spread asymptomatically, the virus offers no clear warnings about when its victims must withdraw from society.

As a result, we’ve come to a half-baked consensus as to what is to be done. What consensus exists is fraying as the economy collapses, the pandemic spirals out of control in the United States, and a generation born to relative comfort and certainty is getting its first live performance of the fragility of human society.

We all seem to understand, now, our collective duty to “flatten the curve” of the outbreak. By dramatically reducing our social contacts, we are meant to slow the transmission of the disease, giving our health-care systems time to respond. Most of us have even seen a simple graph intended to illustrate the point.

The cartoon version of the graph omits the details on the X and Y axes of the graph. It’s left to the imagination to answer how many lives will be saved by this action, exactly; what time frame is required; what is the capacity of our health-care system, whether this can be increased and, if so, how quickly.

The very concept of social distancing itself seems to comprise different prohibitions in different jurisdictions. Trips to the playground are barred in some places. In others, walks are okay.

We are told, paradoxically, that distancing is a minor inconvenience that we should be able to manage easily and gratefully; and, also, that we face hardships and sacrifices not seen since the Second World War.

Those who adopt the rhetoric of noble self-sacrifice gloss over the historical realities of that endlessly romanticized era. The consensus on the Second World War was never absolute, nor evenly shared across the country. To maintain consent, western democracies adopted deeply draconian policies, a police state with severe restrictions on speech, assembly and commerce.

But the consensus required more than this. There was a contract involved.

Men signed up to die for a fight for freedom, a sense of purpose; they wanted to do their duty to King and country—concepts that now seem anachronistic.

And for their sacrifice of blood and treasure, our parents and grandparents came home to a better world—or, at least they believed they did. Upon their return, there were G.I. bills and free post-secondary education, suburban homes and national health services.

The Second World War was the herald of an imperfect golden age.

If we are being required, now, to make a sacrifice on a similar scale, I must ask, what is the contract today?

We’ve known about the novel coronavirus since January.

The strict lockdown measures adopted in China bought western governments crucial weeks. Did we spend the past two and a-half months building temporary hospital spaces? Did we conscript private companies to manufacture ventilators and personal protective equipment for health-care workers?

It’s still not too late to enlist useless lumps like myself to learn simple screening procedures to ease pressure on front-line medical workers in an emergency.

Where is everyone? If this is a war, let’s act like it.

For example: “We need you to stay in your homes for 12 weeks so we can learn about the disease, try new treatments, retool local factories to manufacture millions of N95 masks, build 20,000 new hospital beds and train volunteers. With these actions we will save an estimated 200,000 lives,” is a clear and galvanizing message that most Canadians, I suspect, will embrace.

By comparison: “We need you to stay in your homes for six months, maybe a year, we’re not sure. Maybe until someone comes up with a vaccine. There won’t be a job for you when this is over. And if you don’t obey, we’ll eliminate your civil liberties,” is, very obviously, not tenable. It reeks of panic; of an inability to make difficult decisions in the face of hard realities.

Justin Trudeau speaks during a news conference on COVID-19 situation in Canada from his residence March 19 in Ottawa. (Dave Chan / AFP)

In times of extreme crisis, it becomes our obligation as journalists to offer governments the benefit of the doubt. Managing this pandemic would be difficult for any government and many thousands of lives are at stake. The unwritten contract suggests that this is a moment to blunt ordinary criticism in the name of broader social cohesion.

It becomes a difficult transition to make, and it becomes completely impossible when governments appear to abuse the crisis to accumulate more power. According to reports this week, the Trudeau government attempted to use its COVID-19 aid bill to grant itself unprecedented powers to tax and spend without parliamentary oversight until December 2021. The Liberals were in tense negotiations with opposition parties until the wee hours of Wednesday morning to find a compromise to this totally unnecessary and overreaching proposal.

The opposition was correct to object, and to object strenuously. I will leave it to others to explain why the Liberals’ move was so egregious and inappropriate. For my part, the attempt fundamentally shook my faith in this government’s ability to handle this crisis at a moment when that faith is required. How can we trust a government to declare the Emergencies Act, and potentially exercise the draconian measures therein, if they’re already engaging in this kind of political chicanery? This crisis has only just begun.

From my own limited observation, pictures of partiers on beaches and kids playing beer pong are both deeply anomalous and totally predictable. Most people appear to be respecting social distancing, to the extent that it is possible for them to do so.

But if people are failing to do what is necessary, the failure isn’t on the part of the people—who are simply doing what all people do—but rather on the leaders whose job it is to persuade action on a clear consensus.

Threats to civil liberties are a lever that all governments possess. What’s required, here, is not force, but rather a re-framing of the social contract. If there is a reason to engage in these deeply unnatural and inhuman behaviours, it is an act of leadership to articulate it.

Social distancing—a euphemistic term for something that could more accurately be described as voluntary imprisonment—is not a minor inconvenience. Its impacts are psychologically and emotionally harmful. They are also proving to be financially catastrophic.

The president of the Federal Reserve Bank of St. Louis predicted the U.S. unemployment could reach 30 per cent this year thanks to the COVID-19 shut downs. These are Depression-era statistics, abstractions that obscure extraordinary human suffering. If our economies don’t bounce back once the pandemic has passed, we are courting debt and downturns that will span generations.

Although COVID-19 is a nasty illness for people of all age groups, and fatalities among the young are rare but not unheard of, any public health or economic policy going forward has to consider the impacts of mortgaging the future of one generation to preserve another. The young do not have the capacity to weather this crisis.

The federal government’s $82-billion aid package, tabled Wednesday, is a nice start. I am particularly heartened by the plan to provide $2,000 per month for four months to people who qualify for the benefit. But I fear this won’t be nearly enough.

Ottawa needs to provide cheques to every Canadian household as rapidly as possible. I have reservations about a Universal Basic Income, but as long as we are asking people to isolate themselves, we need to pay them to stay home.

We’ve had a good, long, 70-year run in the West, but this is the end of that golden age. It’s not fair to demand sacrifice from the many without offering some hope of a better world on the other side.