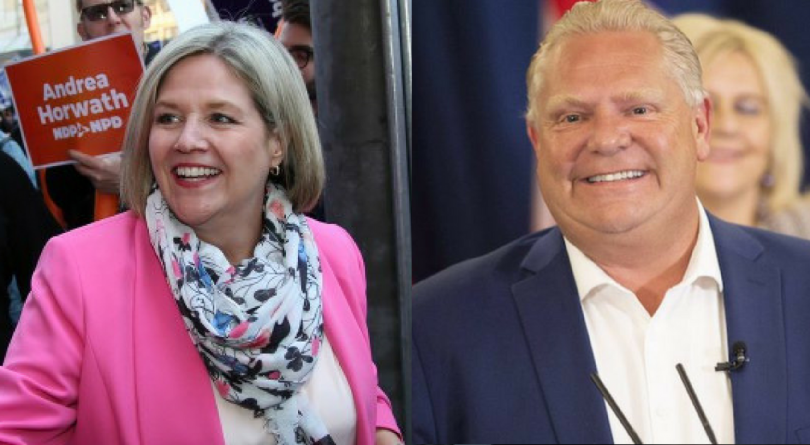 On Thursday, Ontario will decide its next premier. As in past elections, editorial boards at several newspapers from across the province have weighed in with who they think voters should support—though in an era of unending media consolidation, shared editorials across chains are now commonplace.

With Kathleen Wynne essentially conceding that she won’t be Ontario’s next premier, and with her party far back in the polls, no major paper has endorsed her. Which leaves Doug Ford’s PCs and Andrea Horwath’s NDP.  Even then, some outlets couldn’t bring themselves to choose.

Here’s where the papers stand:

READ ALSO: Ontario election 2018 platform guide: Where the parties stand on everything

The Toronto Star said: “Ontario voters should back NDP to stop Doug Ford”

“What’s at stake in Thursday’s election is the future of the province. That’s more important than any strictly partisan choice and progressive voters should think beyond their loyalties to a particular party. They shouldn’t risk giving Doug Ford the chance to drag this province backwards, and in the great majority of ridings that means supporting the New Democrat.

Ontarians are obviously looking for change: the polls are clear on that. But the same polls show the majority of people in this province are fundamentally progressive.”

The Globe and Mail endorsed neither of the parties:

“The choice is thus between a PC government led by Doug Ford and an NDP government led by Andrea Horwath. Neither is desirable, albeit for different reasons. With the PCs, the leader is a profound problem, while the state of the party itself is also a worry; with the NDP, it’s the party’s platform…

The electorate cannot vote for leadership where it does not exist, or for platforms that are wrong for the times. So if you are lucky enough to have a local candidate who embodies integrity and principle, we encourage you to support him or her.”

The Hamilton Spectator and Niagara Falls Review, both owned by Metroland, endorsed Horwath:

“One thing is clear. We cannot endorse a candidate and party who didn’t even go to the trouble of properly filling out the job application. That’s disrespectful. Say what you want about Patrick Brown and Christine Elliott, but they wouldn’t have shown Ontarians the disdain demonstrated by the Doug Ford PCs.

So, the NDP by default? That would be our view. But there are solid Green and Liberal party choices in many ridings, and there are candidates worth supporting for local as opposed to party reasons. We wish you the best of luck as you make your choice.”

“Unlike Wynne and Horwath, Ford knows efficiencies can be found in government. That controlling public spending will lower Ontario’s $12.5 billion a year in interest payments, money saved that can be used to improve public services. This won’t happen overnight given the enormity of the financial hole the Liberals created.

But the way to start digging out begins with the election of Ford and the PCs on June 7.”

“An inexperienced premier Ford will nonetheless have experienced, credible legislative veterans around him. The lack of a proper campaign platform is certainly worrisome, but in reality, given the Liberals’ affinity for cooking the books, no party’s campaign platform will survive the first day. Accountants will need free rein to assess Ontario’s true fiscal status — something the Tories have pledged to arrange without delay. Only then will it be possible to produce anything like a realistic, costed plan.

So, while this is probably not the best choice Ontario has ever had, it is a clear choice: the Liberals must go and the NDP must not win. Ontario would therefore best be served by a Progressive Conservative government led by Doug Ford.”

“Yet the two major alternatives offer limited consolation in an increasingly polarized political landscape. On the right is a Progressive Conservative Party with an erratic populist — Doug Ford — as its leader and a ramshackle platform that has not been fully costed.

On the left is a New Democratic Party captained by the more congenial Andrea Horwath but encumbered by rigid doctrine and spending-spree plans that would shackle a new generation of Ontarians with even more unsustainable debt.

In this era of unreason and instability, we would counsel Waterloo Region voters to seek reason and stability. Support the candidates who best know this community and can represent our interests, whether in government or opposition.”