Philippe J. Fournier: The dominant parties of the past 60 years, the Quebec Liberals and the PQ, continue their decline in public opinion. It's all CAQ now. 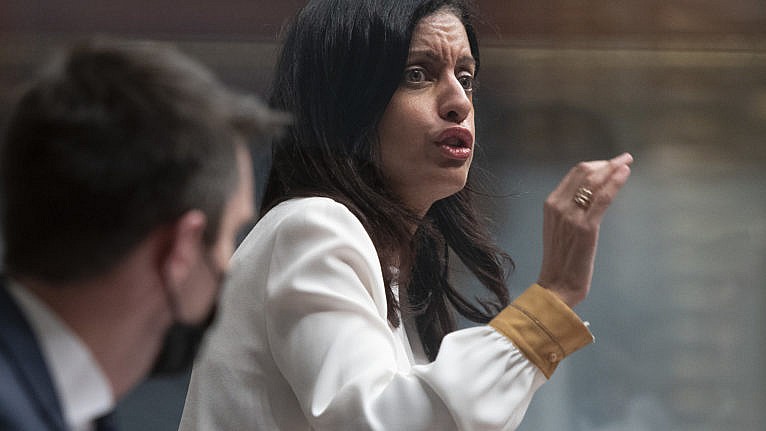 Anglade questions Legault over COVID management, during Question Period on Feb. 8, 2022, at the legislature in Quebec City (Jacques Boissinot/CP)

A new Quebec poll from Léger was released on Wednesday, and while these fresh numbers indicate that François Legault’s CAQ still holds a commanding lead over its rivals six months before the launch of the campaign, there is some notable movement among the opposition parties. There are also, as we will see below, serious problems on the horizon for both PQ leader Paul St-Pierre-Plamondon and Liberal leader Dominique Anglade. Both ships are slowly sinking.

Here are the voting intentions as measured by Leger among decided voters: the CAQ remains on top with 41 per cent support provincially, a massive 21-point lead over the Quebec Liberal Party, whose support is stagnant at 20 per cent (and at only 10 per cent among francophone voters). The CAQ leads the Liberals by eight points (37 per cent vs. 29 per cent) in the Montreal metropolitan area, is 17 points ahead of the Conservatives in the Quebec City area (42 per cent vs. 25 per cent), and holds a commanding 31-point lead over its rivals in the regions of Quebec.

For the Liberal Party, this is once again a disastrous poll: in last place among francophone voters, and nowhere near competitive either in Quebec City or the regions. In addition, fewer and fewer respondents see Liberal leader Dominique Anglade as the best candidate for premier. If the Quebec Liberal Party remains in second place in terms of voting intentions, this is largely due to its concentrated support in Montreal.

As for the Parti Québécois, it is a rout. At 8 per cent in the Montreal area and 9 per cent in the Quebec City area, it is increasingly difficult to project any gains for the PQ, either in these two cities or in their respective suburbs. We will be watching closely two ridings in particular, namely Bourget in eastern Montreal (where PQ leader Paul St-Pierre-Plamondon will run in the fall) and Marie-Victorin in Longueuil, where a by-election is expected to be called in the next few days. Of note: A Léger poll leaked by the PQ to the Journal de Montréal on Monday indicated that a two-way race was emerging in Marie-Victorin between Pierre Nantel of the PQ (former federal NDP MP) and rookie candidate Shirley Dorismond of the CAQ. While this by-election would not change the balance of power in the National Assembly, its outcome could certainly give pause to many current PQ MLAs whose candidacies for the fall have not yet been confirmed.

At 14 per cent, Eric Duhaime’s Conservative Party (PCQ) continues to erode support from its rivals. Last fall, Léger estimated the PCQ’s support at just 5 per cent. In January, Mainstreet Research detected a sharp rise in Duhaime’s support to 13 per cent. It is increasingly clear that the latest wave of health restrictions was, rightly or wrongly, one too many for several Quebec voters. As we shall see below, this rise in support for the PCQ is mainly among voters dissatisfied with the Legault government. We will need to keep a particularly close eye on the Quebec City suburbs, where Duhaime could make gains at the expense of the CAQ. Local polls will be needed to identify these potential hot spots for the PCQ.

Unsurprisingly, Premier François Legault is still perceived as the best candidate for premier among party leaders with 42 per cent. Tied statistically in second place are PCQ leader Éric Duhaime (12 per cent), QS leader Gabriel Nadeau-Dubois (11 per cent), and the Liberals’ Dominique Anglade (10 per cent). Far behind in fifth place, we find PQ leader St-Pierre Plamondon with a meagre 3 per cent (!), including only one-third of PQ voters who perceive him as the best candidate for premier.

For both the PQ and the Liberals, the numbers tell us that the leaders are pulling their party down. It is virtually impossible to conceive of an upturn in voting intentions in the short term when leading party figures are so unpopular with the electorate.

We add this latest poll to the 338Canada Quebec model (see the list of Quebec polls here). Here are the updated seat projections:

The CAQ is currently projected as the favourite in 97 ridings, mainly due to the strong division of the opposition parties’ vote. However, the rise of the PCQ— particularly in the Quebec City and Chaudière-Appalaches—could potentially take a bite out of the CAQ’s stronghold in those regions. The Liberals are reduced to an average of only 18 seats: strongholds on the Island of Montreal, Chomedey (Laval) and Pontiac (Outaouais). With anemic support among francophone voters, the Liberal Party currently has no potential gains elsewhere in Quebec. As for Québec solidaire, it should be able to hold on to its Montreal seats, as well as the Quebec City riding of Taschereau. For the Parti Québécois, it is projected favourite in only two seats (Matane-Matapédia and Joliette), but the party’s ceiling goes as high as 9 seats.

If current trends materialize in the coming months, there is little doubt that we are entering a new era in Quebec. Indeed, the 2020s may be nothing like the last half-century in Quebec politics. The decline of the PQ and the PLQ in public opinion, two political parties that have dominated Quebec politics for the past 60 years, seems to be confirmed with every new poll. The CAQ so firmly occupies the centre/right-of-centre and nationalist ground of the spectrum, that it leaves little space for other parties, aside for the resolute-left (QS) and the populist-right (PCQ).

I have used the analogy of a shipwreck before about the PQ and Liberals, but perhaps the fateful impact has already taken place, and we are now just witnessing—in real time—the inevitable, slow sinking of the hull.