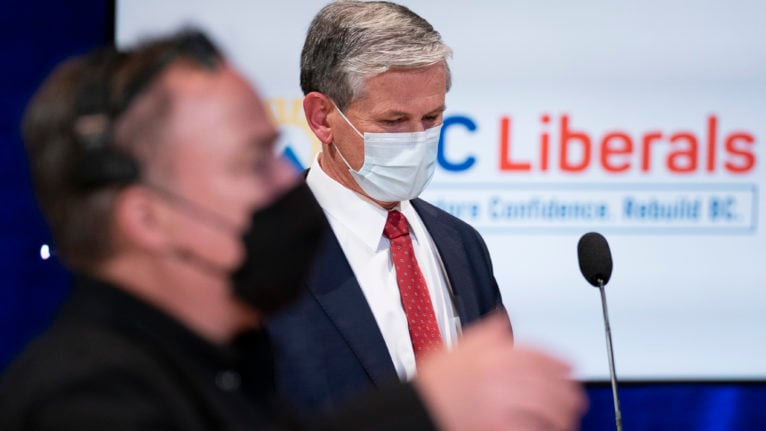 Wilkinson prepares for the leaders debate with Horgan and Furstenau at the Chan Centre in Vancouver on Oct. 13, 2020 (CP/Jonathan Hayward)

The first and only leaders’ debate of the British Columbia election campaign came and went on Tuesday night, and while many seem to believe that Green leader Sonia Furstenau performed the best among the three participants, analysts also pointed out that no knock out blows were given nor received during the debate. Considering the NDP’s comfortable lead in pre-debate polls, John Horgan is probably satisfied coming out of this exercise mostly unscathed—even though he spent the next 48 hours apologizing and explaining his “I don’t see colour” comment.

A new poll from the Angus Reid Institute was released this morning and asked B.C. respondents who had won the leader’s debate. Among respondents who watched the debate, 29 per cent believe Horgan was the winner (including half of NDP supporters). Green leader Sonia Furstenau came second with 23 per cent. B.C. Liberal leader Andrew Wilkinson, who really could have benefited the most from a strong debate performance, came last with only 15 per cent.

Here is the latest 338Canada British Columbia projection update. You may find all B.C. polls listed on this page.

Unsurprisingly, the B.C. NDP leads the way with an average of just under 50 per cent in the popular vote projection. With such numbers, the NDP stands comfortably in majority territory, as we will see below:

The B.C. Liberals are in second place with an average of 36 per cent. The Greens stand at 13 per cent. Although the Libertarian Party of B.C. is running 25 candidates (the most outside of the main three parties), it is not possible to include them in these projections because we have no clear polling data with this party (the Libertarians are included with the “other” option).

With such levels of support, the NDP wins on average 56 seats, 12 seats clear of the majority threshold of 44 seats:

The B.C. Liberals win an average of 30 seats and the Greens, 2 seats.

Here are the seat probability densities for the NDP and Liberals—the higher the bars, the more likely the outcome. As you can see, the curves now barely overlap, which means the Liberals would have to hope for both an incredibly efficient vote and a substantial polling error to win the most seats if current numbers hold.

In 2013, polls in British Columbia were unanimous in showing the NDP in the lead in the waning days of the campaign, some by as much as 7 to 10 points. Yet, on election night, not only did Christy Clark’s Liberals win the popular vote by close to five points, they won 49 of the province’s then-85 electoral districts for a majority in Victoria. Four years later, pollsters clearly had brought some adjustments, because polls in the 2017 B.C. election were incredibly precise (see for yourself).

Could pollsters underestimate Liberal support once again? It’s surely not impossible, but poll after poll we have seen John Horgan’s favourability at much higher levels than Andrew Wilkinson’s. In the new Angus Read poll published this morning, Horgan’s appeal had a +13 rating (positive appeal minus negative appeal). Sonia Furstenau’s score was +5. Wilkinson’s? Minus-45.

These numbers suggests Wilkinson is dragging down the B.C. Liberal brand, which makes a last minute come back all the more unlikely.

As it stands one week from election day, the B.C. Liberals only win 2.5 per cent of all simulations performed by the 338Canada model. The NDP wins 97 per cent of simulations:

At the district level, the NDP can currently count on an unusually high floor or 37 safe seats (“safe” here means a party wins more than 99 per cent of simulations). Should those safe NDP districts go as projected, then the NDP would only have to win 7 of the 17 remaining districts they are currently projected as favourites to win a majority:

One quick word on the Chilliwack-Kent district: last night, it was announced that current B.C. Liberal MLA Laurie Throness had resigned as a candidate for comments he made comparing contraception to eugenics. Since advanced voting has already begun and it is too late for Elections B.C. to reprint the ballots, his name will remain on the ballot in Chilliwack-Kent as a B.C. Liberal candidate. However, how will voters in this electoral district react to his resignation?

Without targeted micro-local polling, there is no way to empirically find out. Before his resignation, Throness was the favoured candidate in Chilliwack-Kent, but his NDP challenger stood only 7 points behind on average. What to do with this projection? Well, a similar case happened in the New Brunswick election in September in the riding of Victoria-La Vallée: PC candidate Roland Michaud was the favourite with a projection of 45 per cent of the popular vote according to the model before he was forced to withdraw from the race for posting transphobic posts on Facebook, and it was too late to remove Michaud’s name from the ballot. When all votes were counted on election night, Michaud still received 28 per cent of the vote. Therefore, we will use this simple hypothesis: Throness will still receive a fair fraction of support, but many Liberal voters in Chilliwack-Kent will either stay home or support one of the third-party candidates (Independent Jason Lum and Libertarian Eli Gagné.) It is certainly far from perfect projection-wise, but, given the circumstances, it probably is the most reasonable hypothesis to follow.

We will continue to follow the British Columbia numbers daily all the way to election day on Oct. 24. To find your home district, use this list of all 87 electoral districts, or visit the regional pages below: