338Canada: In a Quebec first, Legault takes a hit

Philippe J. Fournier: A new Mainstreet poll suggests the 'pandemic honeymoon' between the CAQ and Quebec voters may have finally reached a limit 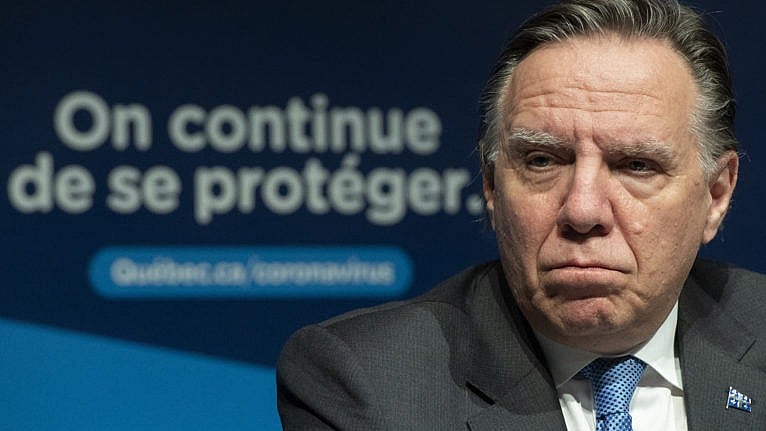 Legault speaks during a news conference in Montreal on Dec. 30, 2021 (Graham Hughes/CP)

A new poll from Mainstreet Research suggests that the CAQ has slipped in voting intentions in Quebec since the holidays. While François Legault’s party still remains comfortably ahead, public opinion in Quebec appears to be in flux—a first since the pandemic began.

According to Mainstreet, if an election had been held this week in Quebec, the CAQ would have received 38 per cent of support, a drop of 10 points since Mainstreet’s previous Quebec poll last winter. Still, the CAQ holds an 18-point lead over the Quebec Liberal Party, which is treading water at a measly 20 per cent support in the province.

It is Québec solidaire (QS) that seems to be benefiting from the CAQ’s erosion of support. The left-wing party is tailing the Liberals with 19 per cent support provice-wide, a significant increase over its performance in the 2021 surveys. Over the past year, QS has averaged between 12 per cent and 14 per cent in the polls in Quebec.

The Quebec Conservative Party (PCQ), led by Eric Duhaime, is the other party that appears to be benefiting from the current discontent with the CAQ. With support from 13 per cent of those surveyed—a significant increase over recent trends—Duhaime could certainly cloud the picture in the projections. This is particularly true in the Quebec City metropolitan area, where the PCQ is in second place (though still 15 points behind the CAQ). While we must always be cautious with regional sub-samples (they have a higher margin of error), the 2021 polls also indicated that the PCQ was performing better in the Quebec City area than in the rest of the province. Province-wide, support for the PCQ was measured between 5 per cent and 11 per cent in polls in the second half of 2021, so this would be a significant increase if this trend is confirmed.

Finally, the Parti Québécois and Paul St-Pierre-Plamondon do not appear to benefit from the CAQ’s missteps. Indeed, Mainstreet measures stable support for the PQ with 10 per cent of voting intentions in the province. Throughout 2021, PQ support has fluctuated between 9 per cent and 13 per cent in the polls.

This poll thus highlights that the “pandemic honeymoon” between the CAQ and Quebec voters may have reached a limit. The CAQ government’s about-face on holiday gatherings due to the exponential growth of COVID-19 infections, followed by the announcement of strong measures to counter the spread of the virus (closure of restaurants, bars, concert halls, ban on indoor gatherings, a curfew) seem to have had a significant impact on public opinion.

In the Montreal metropolitan area (Island of Montreal and the 450), the CAQ leads with 34 per cent, a 10-point lead over the PLQ, while QS is in third place with 20 per cent. In the Capitale-Nationale region, the CAQ continues to lead with 39 per cent, while the PCQ obtains 24 per cent. Finally, in the regions of Quebec, the CAQ still leads with 44 per cent support, 25 points ahead of Québec solidaire. Note, however, that the margin of error for the provincial survey is ±3 per cent, but it is higher for the regional sub-samples.

Unsurprisingly, the CAQ’s slide in voting intentions is accompanied by a decline in satisfaction with François Legault’s government. When asked, “Overall, do you approve or disapprove of Premier François Legault’s performance since 2018?”, 57 per cent approve, compared with 41 per cent who disapprove. Surely many premiers in Canada would only dream of such ratings, but, compared to late 2021 polls, these approval numbers indicate a sharp decline for Legault of late.

When we break down these results by voting intentions, we see that François Legault still has near-unanimous support within his own party. Additionally, a majority of PQ voters approve of the premier. Only about one-third of QS and QLP voters approve of Legault’s performance, while a strong majority of Conservative voters disapprove.

It is not an easy task to include such a poll in seat projections. Why? When a poll shows numbers that are outside the current ranges, two scenarios are possible: either 1) the poll is a statistical outlier, or 2) the poll is a precursor to a new trend. However, if the survey is indeed measuring a new trend, we won’t know until other firms take the pulse of Quebecers.

While this Mainstreet poll measures stable support for the QLP and the PQ, it detects a significant decline in the CAQ in favour of Québec solidaire and the Conservatives. Is this a real trend that could continue? Or is it just a spontaneous reaction of the electorate following the recent lockdown measures? We will only know in coming weeks. For this reason, the updated seat projection cannot only be based on this survey alone.

Weighting the Mainstreet numbers in the 338Canada model, the CAQ wins an average of 93 seats. If this number seems excessively high, it is a direct result of the strong divide in the non-CAQ vote (and our first-past-the-post voting system). While the CAQ still dominates the francophone vote, it is facing four parties each polling between 10 per cent and 20 per cent. The result: with both the Liberals and the PQ well below their respective 2018 levels, the CAQ makes significant seat gains at the expense of these two rivals, while QS manages to keep most of its ground.

It is important to note that this Mainstreet Research poll was on the field prior to the announcement of the “unvaxx tax” by Legault on Tuesday afternoon. Will this policy proposal, whose details remain unknown at this time, assuage Quebecers’ dissatisfaction with the new lockdown measures? Will the resignation of Quebec’s director of public health, Dr. Horatio Arruda, have any impact on public opinion? We shall soon find out.

The data for this Mainstreet Research poll was collected from Jan. 6 to 8, 2022 from 1,105 Quebec voters aged 18 and older. The margin of error for the full sample results is ±3%, 19 times out of 20. Totals may not always add up to 100% due to rounding. To view the survey report, visit this link. To view the complete list of Quebec polls, as well as seat projections, visit the 338Canada page.