338Canada: How bad things are for Doug Ford

Philippe J. Fournier: If an election was held today, the deeply unpopular PCs would be tied with the still leaderless Liberals 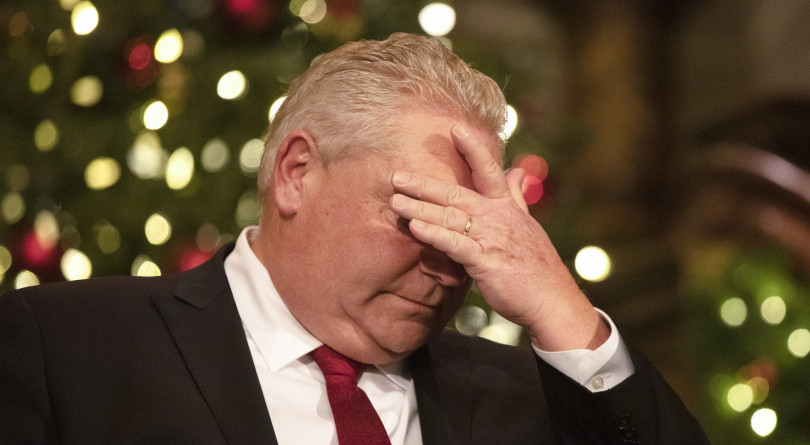 Days before the latest Council of the Federation meeting in Toronto earlier this month, Léger published its latest poll on the popularity of Canada’s premiers for the Canadian Press (see the full report here). Doug Ford’s approval rating came in last place among all premiers, both across the country (-45 rating) and within his own province (-43 rating). That yet another poll shows Doug Ford to be one the least popular premiers in Canada is one thing, but would Ontario voters still support the Ontario PC should an election have been held this fall?

Last week, EKOS released its latest federal and Ontario numbers (see full the report here). While the federal voting intentions remain close to the latest election results, many Ontario voters have had a change of mind since the June 2018 election, and are deeply divided at the provincial level. According to EKOS, the leaderless Ontario Liberal Party (32 per cent) and Doug Ford’s PC (30 per cent) are in a statistical tie on top of voting intentions, with Andrea Horwath’s NDP coming in third place with 24 per cent of support.

Even though provincial voting intention data has been scarce in the second half of 2019 (when pollsters were focused on the federal campaign), these numbers from EKOS remain in line with trends of the past months. In September, days before the federal campaign, Campaign Research measured the PCs at 32 per cent, a mere four points above the Liberals. In August, Corbett Communication had both parties tied at 30 per cent apiece. (The list of all Ontario polls is available here.) 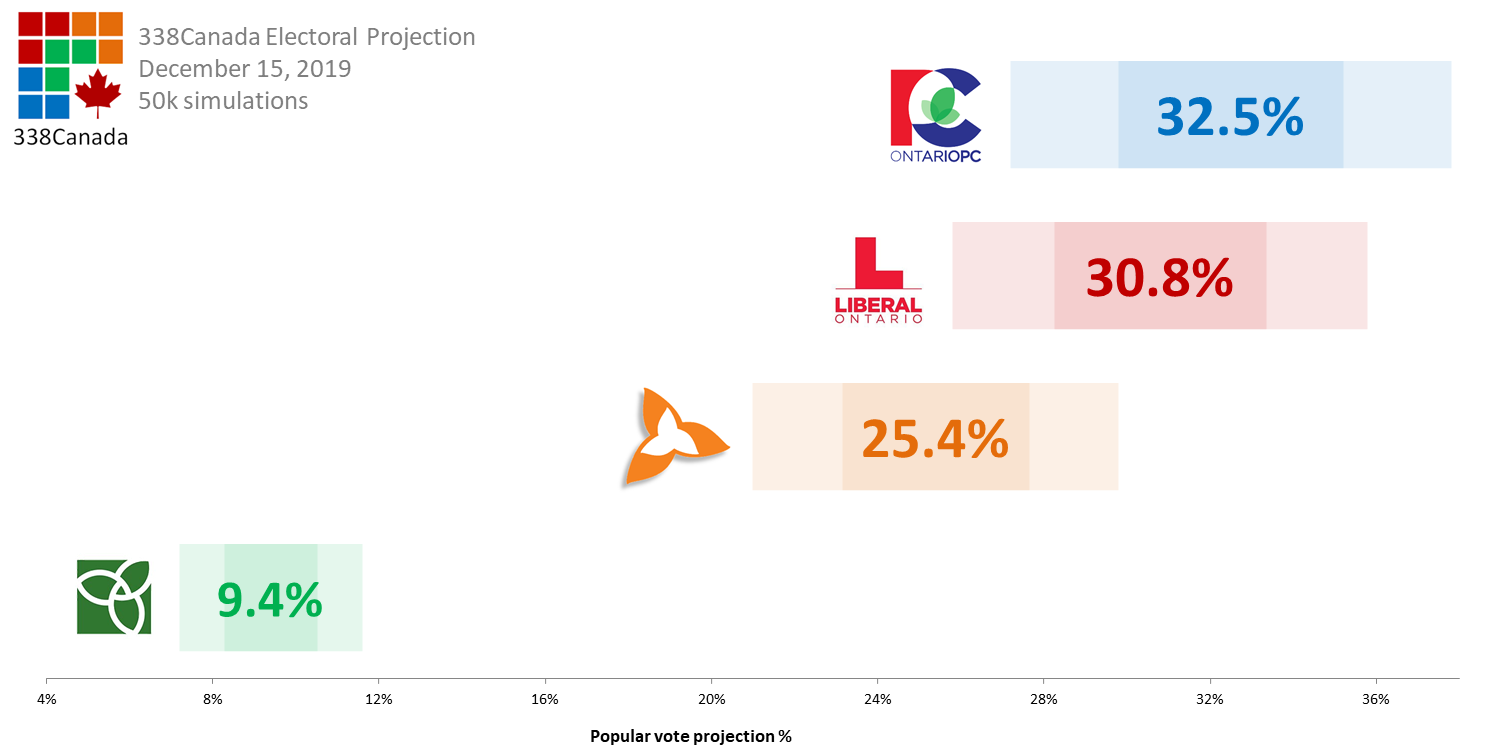 On the graph above, the coloured bars indicate the 95 per cent confidence intervals. Naturally, both the scarcity of data and the fact that the top parties are locked in a close race increase the model’s uncertainty.

While Ontario Liberal supporters may rejoice that their party, despite not having an official leader yet (John Fraser is currently the interim leader), is back in contention, they should certainly worry that the party led by Canada’s most unpopular premier is still tied for the lead. Moreover, election results from the past 30 years suggest that 30 to 32 per cent support should be considered a floor for the Ontario PCs—the party has not received a share of the popular vote lower than 30 per cent in a general election since 1990. Whatever one thinks of its policies and governing style, the PC party and its brand remain strong in Ontario.

Some would suggest that calculating a seat projection two-and-a-half years before a general election is a frivolous exercise. Since the 338Canada model has a 90 per cent success rate after four general elections, we believe at 338 HQ that those projections help us better understand the political landscape, perhaps the way analytics in hockey help explain the game beyond wins and losses.

By adjusting the vote projection per region using historical and demographic data, the 338Canada model calculates that the Liberals and PCs would be in a statistical tie seat-wise, with no party close to the majority threshold of 63 seats at the Ontario Legislative Assembly. The Ontario NDP would most likely hold the balance of power: 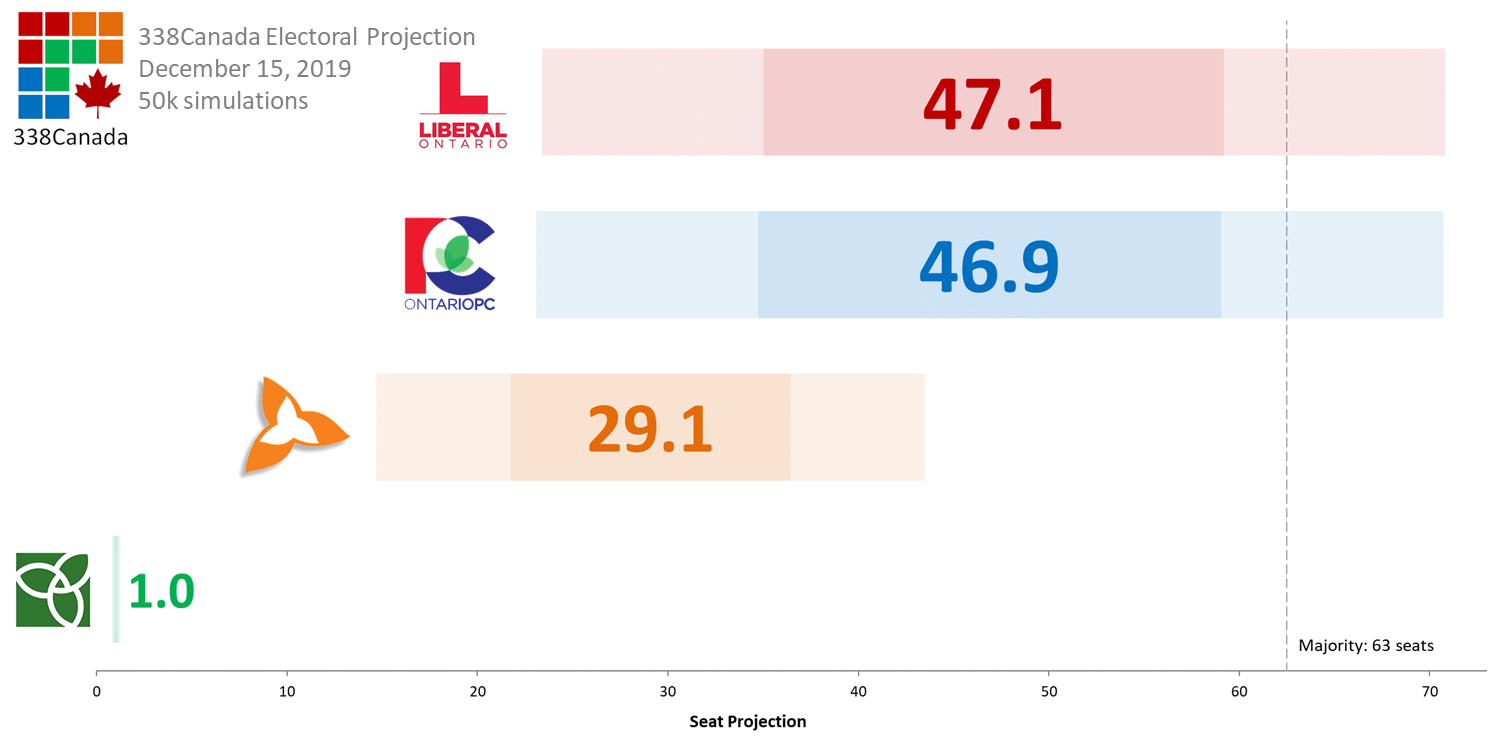 Please note once again the wide confidence intervals. With voting intentions so close between the three main parties, more than 50 Ontario districts are currently labelled as “leaning” or “toss up”, rendering the province-wide projection even more uncertain.

A quick word on the Green Party of Ontario: Even though it is polling at roughly double its 2018 election result (4.6 per cent), the Greens remain mostly non-competitive in every riding outside of Guelph. Keep in mind that only four Green candidates received more than 10 per cent of the vote in last year’s election, including Green leader Mike Schreiner. The party had its second best results of 2018 in Parry Sound—Muskoka (third place and 20 per cent), a riding that was easily won by Norman Miller of the PCs. Should the Green party begin polling in the low-to-mid-teens, its seat projection could potentially increase in a significant way.

We are 18 months into Doug Ford’s reign as premier of Ontario. Opinion polls keep measuring Ford as deeply unpopular within the province (and across the country), yet the Ontario PCs remain competitive in voting intentions. With the Liberal leadership convention scheduled to take place in March 2020, it will certainly be interesting to follow the numbers in the next few months.