338Canada: The Quebec Liberals in free-fall

Philippe J. Fournier: The party could lose as many as 14 seats compared to its 2018 results, and be driven out of French-speaking Quebec 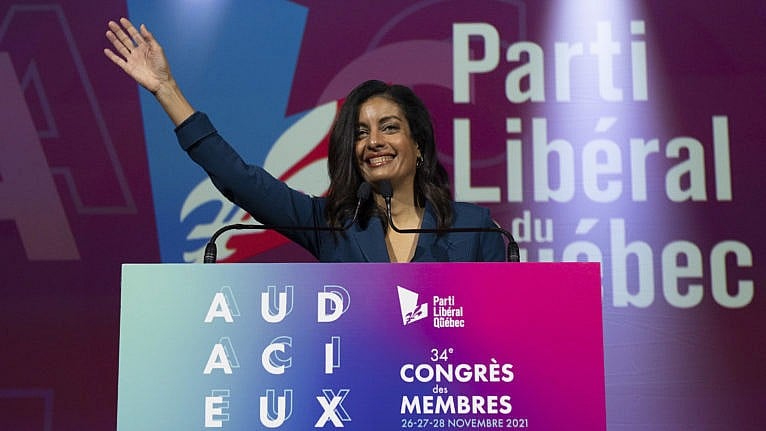 Anglade waves to delegates before her opening speech, at the Quebec Liberal convention, on Nov. 26, 2021 in Quebec City (Jacques Boissinot/CP)

As we enter an election year in Quebec, not only does François Legault’s Coalition Avenir Québec (CAQ) lead in voting intentions, but its lead over each of his rivals has not faded one iota since the COVID-19 pandemic reached our shores back in March 2020.

The most recent Quebec poll, published last week by Le Journal de Montréal, shows that the government’s turbulent fall session at the National Assembly has had no apparent effect on the Quebec electorate. According to this Léger poll, the CAQ garners 46 per cent of voting intentions in the province (the party obtained 37 per cent of the vote in the 2018 general election). The Quebec Liberal Party (QLP) comes in a distant second place, far behind the CAQ, with just 20 per cent of voting intentions, five points below its historically disastrous 2018 result.

This CAQ dominance is all the more imposing given that it receives the support of 52 per cent of francophone voters, a monstrous 36-point lead over its closest rival (the Parti Québécois) in this dominant demographic. As for the Liberals, they are getting decimated in francophone Quebec: only 9 per cent of francophone respondents support Dominique Anglade’s QLP. While opinion polling in Quebec has shown the Liberals steadily but gradually losing support among francophones since the rise of the CAQ, the QLP polling in single digits remains a shocking sight.

The poll was conducted in late November as the Quebec Liberals were gathered in Quebec City for their annual convention. The event featured leader Dominique Anglade promoting a more centrist, progressive and green platform for the upcoming 2022 general election—a clear sign that the QLP wants to insert some daylight between itself and the CAQ policy-wise. Whether this strategy will work is still up in the air, but such a dramatic turn comes with substantial risks for a party that used to dominate among Baby Boomer voters in the province. According to this Léger poll, the QLP trails the CAQ by a crushing 33 points among voters aged 55 and over (54 per cent for the CAQ, 21 per cent for the QLP). Could a greener and more progressive platform really turn this tide around? Desperate times call for desperate measures.

Both Québec solidaire (QS) and the Parti Québécois (PQ) polled at 13 per cent of voting intentions, according to Léger. Both parties currently stand below their 2018 election results (17 per cent for the PQ, 16 per cent for QS). For QS, neither Gabriel Nadeau-Dubois’ additional visibility in the National Assembly as parliamentary leader nor his party’s recent convention seem to have moved the needle in favour of the left-wing formation. As for the PQ, it stands in fourth place in the Montreal metropolitan region, and trails the CAQ by more than 35 points (!) in Quebec city and in the regions of Quebec. Without some concentration of its vote (as is the case for QS in the central areas of Montreal), the PQ could suffer significant seat losses next year if current numbers remain stable. It should be noted, however, that the Léger poll was fielded before the PQ convention last week, during which the party presented a new logo and the broad outlines of its platform for 2022.

We add this poll to the 338Canada Quebec projection. If an election had been held this week, the CAQ would have been favoured to win no fewer than 97 of the 125 seats in the National Assembly (on average), up 23 seats from its 2018 total.

Since the CAQ currently dominates francophone Quebec like we have not seen any party do in the past 40 years in the province, the CAQ vote is highly efficient. See the CAQ’s current seat projection on the graph below: François Legault enjoys a “floor” of safe seats higher than his party’s seat total from 2018, and the projection’s high-end tail stretches above 100 seats—a total no provincial party has achieved in Quebec since Robert Bourassa’s QLP in 1973.

The two big losers in this projection are the political formations that have governed Quebec for half a century between 1970 to 2018. For the Liberals, they could lose as many as 14 seats compared to their 2018 results. With the exception of Pontiac in the Outaouais, all the ridings projected to be favourable to the QLP are located in Montreal and Laval. In other words, the QLP could be driven out of French-speaking Quebec. Even the best-case scenarios of this projection have the Liberals losing seats to the CAQ, even a handful on the Island of Montreal, see graph below:

Unless there is a major shift in the vote in Montreal over the next year, Québec solidaire’s Montreal ridings are not expected to change color. However, the rise of the CAQ on the Island since 2018 (particularly at the expense of the PQ) could dampen QS’s hopes of making gains in Montreal. As for the Parti Québécois, it is currently projected to lose 7 of the 10 seats it won in 2018. The three ridings most likely to remain in the PQ fold are Matane-Matapédia, Joliette and Gaspé.

Nevertheless, neither the PQ nor QS should be expected to grow beyond their natural base of voters in the near future. Unless there is a new wave of separatist sentiment growing in the province, the PQ’s ceiling will remain in the high 10s ad low 20s in popular support. As for QS, I recently spoke with activist students who were challenging my projections. They claimed QS would become the official opposition with 20-to-25 seats in 2022. Keeping an open mind to their suggestion, I asked how QS would reach that total. “Take this list of ridings and tell me how they get to 20.” They drew blanks.

Which leads us back to the Liberals. Numbers show the party is in free-fall and about to be wiped out of francophone Quebec. Having its right-of-centre and business-savvy flank eroded by the CAQ, and without the threat of separation on the near horizon, the QLP’s very raison-d’être has become a blur and has driven the party into an existential crisis. A greener and more progressive platform for the QLP may be an attempt to attract soft federalist voters currently leaning towards QS (polls have measured close to half of QS voters are not in favour of Quebec sovereignty, even though QS is officially pro-separation), but again, those potential voters would mostly be urban voters. Seat-wise, this would not help the QLP grow beyond its loyal Montreal base. Without stronger numbers in rural Quebec, the QLP could soon suffer its worst electoral defeat since confederation.

Details of this Quebec projection are available on the 338Canada Quebec page. You will find all 125 electoral district projections here, or use the regional links below: