7 must-see moments from the 2019 leaders debate 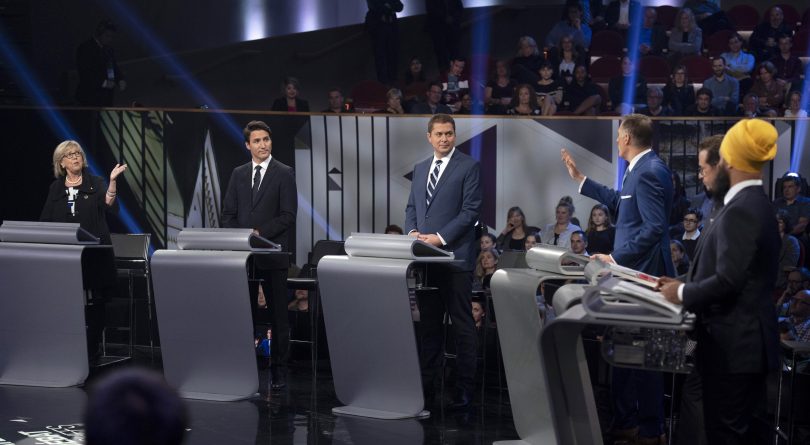 May, Trudeau, Scheer, Bernier, Blanchet and Singh at the Federal Leaders Debate on Oct. 7, 2019 (Justin Tang/CP)

For the first time ever in Canada, six federal leaders shared a debate stage. They faced each other and five separate moderators over two hours. The plan was to talk about five themes: affordability and economic insecurity; national and global leadership; Indigenous issues; polarization, human rights and immigration; and environment and energy. The leaders answered questions from viewers, moderators and each other. And at the end of each segment, they jumped in for a few minutes of free-for-all cross-talk. We found seven moments to remember—one for each leader, and one where every leader had something to say.

.@AndrewScheer, responding to @JustinTrudeau: "You seem to be oddly obsessed with provincial politics. There is a vacancy for the Ontario Liberal leadership, and if you are so focused on provincial politics go and run for the leadership of that party Mr. Trudeau." pic.twitter.com/uGQqo3gRMk

The morning of the debate, Justin Trudeau found himself at a boys and girls club a few minutes’ drive from Parliament Hill, where he lamented provincial education cuts at the hands of Premier Doug Ford. Trudeau has constantly referenced Ford’s name on the campaign trail. Scheer called him out on it. “You seem to be oddly obsessed with provincial politics,” he said. “There is a vacancy for the Ontario Liberal leadership. If you’re so focused on Ontario politics, go and run for the leadership of that party.”

Scheer got personal with Trudeau—no surprise to anyone watching the last few months in Canadian politics. The Tory leader called his Liberal rival a “phoney” and a “fraud” who doesn’t deserve to govern Canada. Given the chance at a one-on-one exchange, Scheer turned to face Trudeau straight on and, for the first time since the writ drop, asked Trudeau a question point-blank: “When did you decide the rules don’t apply to you?”

.@JustinTrudeau to @theJagmeetSingh on Quebec's Bill 21: "You didn't say that you would possibly intervene. You didn't even leave the door open, and that's not leadership." #canadadebates2019 #elxn43 pic.twitter.com/ktGwHud10H

In a bizarre twist, one of Trudeau’s must-see moments was his exchange with Singh, where he backed his opponent into a corner by asking him the question on many Canadians’ minds. Why had Singh, the first person of colour to lead a federal party, decided not to do anything about Bill 21 in Quebec if elected? The moment takes on an extra flavour of ‘what in the world has politics come to’ when we remember that only a few weeks before, Trudeau had been in deep water for the brownface scandal. And today, he asks a person of colour why he isn’t going to do anything about actual discrimination.

Comic relief: After moderator Dawna Friesen mistakenly refers to @JagmeetSingh as @AndrewScheer, Singh retorts: "I wore a bright orange turban on purpose today. What does it take!" Scheer then points out his height advantage. #LeadersDebate2019 #elxn43 pic.twitter.com/VC1A7B6iO3

Are you there, leaders? It’s me, Jagmeet

Jagmeet Singh’s most notable moments lay in his delivery of one-liners, rather than actual answers to questions. When Singh was twice referred to as ‘Scheer’ during the debate — first, by Justin Trudeau and again by moderator Dawna Friesen — he replied with mock exasperation, marvelling at how people kept getting him mixed up, pointing to his head, saying he chose to wear a bright orange turban on purpose that day. He also interjected in Trudeau and Scheer’s discussions about their climate change plans, telling Canadians they didn’t have to choose between ‘Mr. Delay and Mr. Deny,’ and was greeted with applause when he jumped in to ‘help them out’ as Trudeau and Scheer stumbled on abortion.

"It's so heartbreaking for me to look at you today and know that you could have done so much more the last four years" @ElizabethMay to @JustinTrudeau on climate change pic.twitter.com/6iFjU0sogY

Elizabeth May is the most seasoned debater among the bunch and has the most ambitious climate plan of all six parties (with Bernier’s People’s Party having no plan at all), so she was a fierce critic of Trudeau’s record. “It’s so heartbreaking for me to look at you today and know that you could have done so much more the last four years,” she said to Trudeau, adding later in her that his goal was a target for failure. She then had nothing but derision for Scheer’s plan to cut foreign aid to help Canadians get ahead. “Mr. Scheer, that may be the worst idea in your whole non-platform.”

Yves-François Blanchet on protecting Canadian interests on the world stage: "When you're facing a powerful foe like China, you don't try to show biceps if you have only tiny biceps" #canadadebates2019 pic.twitter.com/zl4hJdU7Vx

No matter their charm, no leader of the Bloc Québécois can expect to win over many Quebec voters in an English-language leaders debate. Gilles Duceppe, the Bloc leader for seven straight elections, was a well-practiced debater in his second language—and typically scored positive reviews for his free-wheeling performances (even if the effect was negligible). Yves-François Blanchet, who is leading a potential Bloc resurgence in the polls, carried on the Duceppe tradition.

On Canada’s place on the world stage, Blanchet said strong leaders avoid making big mistakes. He turned his attention to China. “Arresting the chief financial officer of Huawei might have been a big mistake for which farmers growing soy or those doing pork or beef might have paid the price,” said Blanchet. Then came the zinger. “When you are facing a powerful foe like China, you don’t try to show biceps if you have only tiny biceps.”

Bernier tries to get a word in edgewise

It was clear off the top of the debate that Scheer’s first job was to attack Trudeau’s record—but his second task was to fend off Maxime Bernier. Early on, as Scheer cast himself as a champion of immigration—which has “made Canada strong”—Bernier needled him about the need for shared Canadian values, to “celebrate what unites us.” Scheer talked right past those comments and accused Bernier of “making your policy based on trying to get likes and retweets from the darkest parts of Twitter.”

Bernier repeatedly railed against the other leaders’ fiscal plans, none of which promise to achieve balanced budgets as quickly as his People’s Party. At one point, he threw up his hands and lamented to Scheer: “You won’t balance the budget. Nobody will balance the budget.”

When abortion came up at #LeadersDebate2019, all six leaders had something to say—in between the cross-talk, which briefly took over the stage. #elxn43 pic.twitter.com/xVvqOTMqhH

Everyone gets a word in on women’s rights

Blanchet asked Scheer about his position on Bill 21, but that subject was quickly overtaken. Scheer cited his party’s defence of individual liberty—even recalling former prime minister John Diefenbaker’s landmark Bill of Rights way back before the elder Trudeau was PM. The younger Trudeau didn’t wait long to jump in, accusing the Tory leader of betraying women and, separately, LGBT communities with past comments. Scheer acknowledged his own pro-life views, and the two leaders dutifully descended into cross-talk for most of the next 40 seconds.

That’s when Singh, waving his hands from the other side of the stage, intervened. “A man has no position in a discussion on a woman’s right to choose,” he said, to applause in the room. May remained nonplussed. “It’s been really interesting for most of this campaign to hear about what a woman’s rights should be,” she said, referencing her absence from the TVA debate. When May finished by urging all leaders not to allow “an inch of retreat” on women’s rights, Trudeau, standing to her left, applauded.