A black mark on the federal election campaign

Election Image of the Day: A Liberal in New Brunswick is one of three candidates whose signs are defaced with swastikas 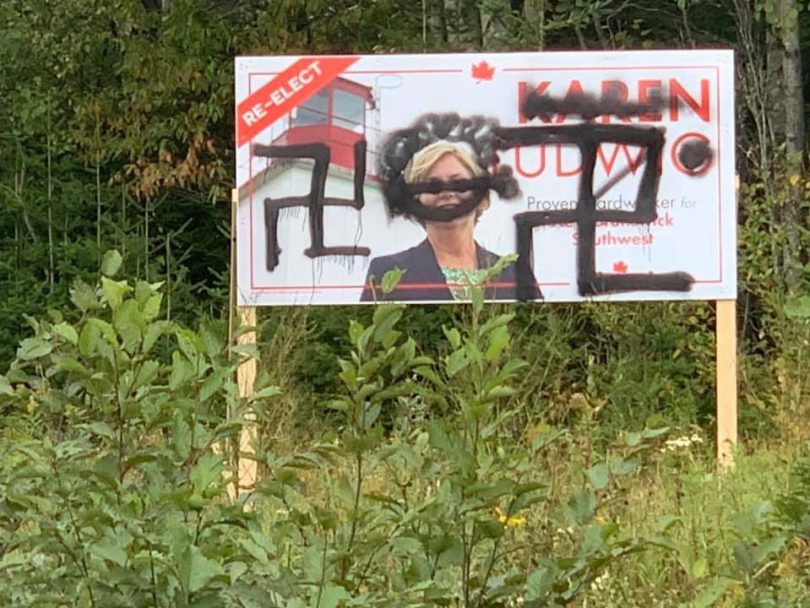 Karen Ludwig isn’t Jewish, but nor is she a Nazi. She is, however, a woman running for office and that, apparently, is enough to get your face marred by swastikas these days. The Liberal MP, seeking re-election in New Brunswick Southwest, woke up yesterday to find several of her billboards vandalized, including one where her face was spray-painted with the black Nazi symbol, and posted the evidence on Twitter. She’s not alone. In Montreal, Liberal candidate Soraya Martinez Ferrada and Conservative Mariam Ishak—both women of colour (Latina and Egyptian)—found numerous signs of theirs ruined by the same hateful symbol. The culprits probably aren’t the same people, but they’re the same types of people: those emboldened by the rising tide of white supremacy, threatened by powerful women and cowardly enough to hide their faces. This will certainly elevate the topic of racism and white terrorism into a bigger campaign issue, though the bipartisan nature of the attacks give the Conservatives a little leverage to deflect common critiques of bigotry in their party.