A budget that hopes Canadians look past the numbers

John Geddes on the message behind a not-so-spectacular federal budget, and how Bill Morneau and the Liberals hope to sell it

Not so long ago, the conventional wisdom around Ottawa was that the second budget of Justin Trudeau’s government would be a blockbuster. That was largely because the legend of the second budget of Jean Chrétien’s Liberals—with Paul Martin’s famous 1995 declaration of war on deficits—is fixed in the collective memory of Canada’s political class.

But history didn’t conveniently repeat itself today when Finance Minister Bill Morneau tabled his 2017 blueprint for taxing and spending. It turns out that his 2016 outing was more obviously a grand gesture. The sheer dollar amounts attached to the two budgets’ big themes go a long way to telling the story of that contrast.

Last year’s budget was all about pumping roughly $4 billion a year into middle-class wallets, mainly through the ambitious new Canada Child Benefit and a middle-income bracket tax cut. This year’s is built around “skills, innovation and middle class jobs,” but spending on no fewer than 25 programs under that heading adds up to just $753 million in 2017-18, rising to a bit more than $1 billion in each of the following four years.

Of course, just tallying up how much new spending and tax cuts the government can afford to announce is a crude way to measure any federal budget’s ambition. Morneau’s challenge as he sells Budget 2017 this week, and Trudeau’s task for the coming months, is persuading Canadians that the Liberal vision can’t be captured on a spreadsheet. In his budget speech, Morneau stressed, not how much money he’s putting on the table, but “maximizing every dollar and ensuring it is well spent.”

He is not a scintillating speaker, but Morneau strives to convey empathy for Canadians who are fearful that technological change threatens their jobs now and will make it harder for their kids to find secure work that pays well in the future. In a world of, as he put it in his budget speech, “self-driving cars, artificial intelligence, genomics [and] quantum computing,” Morneau promises to make it easier to keep up.

MORE: Can Morneau claim his share in the spotlight? 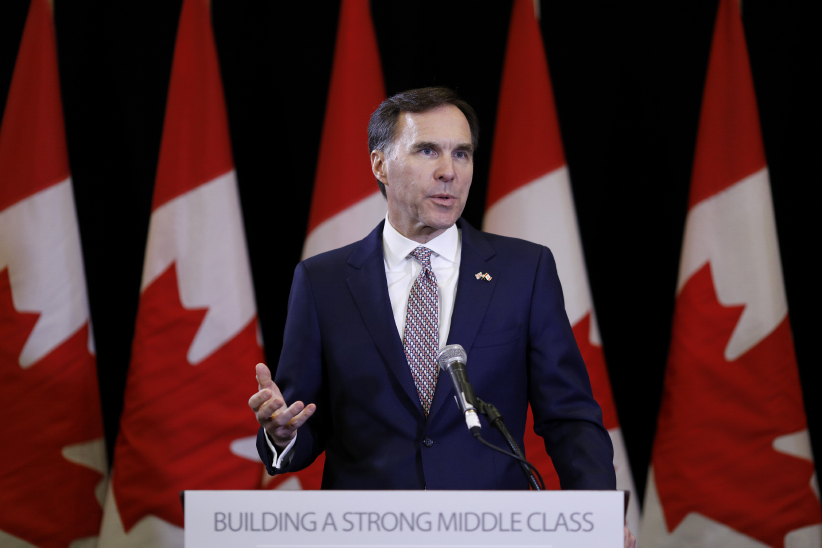 Set against the backdrop of dizzying change that he sketched, Morneau outlined a training agenda. He promised $1.8 billion more over six years to expand labour market agreements with the provinces, which help Canadians looking for work upgrade their skills. He earmarked $132.4 million over four years, beginning in 2018-19, to let unemployed Canadians pursue training while collecting EI.

Another $225 million, again over four years starting in 2018-19, and $75 million a year after that, will go to launch a new organization to support skills development and measurement. That new agency is an idea championed by the Morneau’s blue-chip Advisory Council on Economic Growth, headed by international business consulting heavyweight Dominic Barton, whose ideas crop up repeatedly in Budget 2017. Barton’s perspective is an unmistakable influence on Morneau’s strategy for helping cutting-edge companies.

MORE: Why Dominic Barton is helping Ottawa out

It’s there in Budget 2017’s proposal for what looks like a fairly large investment—up to $950 million over five years—to start up a small number of “business-led innovation ‘superclusters’.” (Enthusiasm for encouraging of innovative companies to spring up together, often near science and technology-oriented universities, has been around for decades.)

But Morneau hasn’t really come up with much new money in 2017 for his version of clusters. Of the $950 million, fully $800 million comes from 2016’s innovation funding, and $150 million from 2016’s public transit and green infrastructure money.

It’s the much same story with the budget’s promise to spend $1.26 billion over five years on a Strategic Innovation Fund, to support everything from agri-food companies to clean tech firms. The new fund will mainly pull together the existing federal funding available for sectors like aerospace, defence and autos. Budget 2017 antes up a modest $100 million in new money over three years.

In some cases, Morneau aims to make a difference without forking over any new cash at all. And he might just succeed. For instance, he pledges a review of the bewildering range of federal support for innovation—scattered across departments from Agriculture, to Natural Resources, to Science and Technology—and streamline them. He promises that “in time,” Innovation Canada will function as a “one-stop shop” for any company on the hunt for federal assistance.

While economists, entrepreneurs and policy wonks might get a charge out of Morneau’s measures on innovation and skills, those thrusts look unlikely to excite many Canadian voters. Last year’s Canada Child Benefit and middle-bracket tax cut were much easier sells. Among progressive voters concerned about economic fairness, however, some targeted new budget measures could offer the Trudeau Liberals messages that resonate.

MORE: Did the budget walk the walk on the Liberals’ innovation talk?

Morneau’s biggest single spending promise is $11 billion “to help ensure every Canadian has a safe and affordable place to call home.” That’s a substantial commitment, although it extends all the way out to 2027-28, a distant planning horizon. And little of the new money is slated to be spent this year or next, which means the housing plan could be seen as a pitch for giving Trudeau’s Liberals a second mandate, in the 2019 election, to carry out the strategy.

Another $7 billion over the next decade is pledged to help low- and middle-income families with the costs of child care. That includes “up to 40,000 new subsidized child care spaces over the next three years, by working with the provinces and territories.”

As well, Employment Insurance will be made more flexible, letting parents to spread benefits, at a lower rate, over 18 months, up from the current 12 months. Women will be allowed to collect EI maternity benefits for 12 weeks before their due date, up from eight weeks now.

None of these social-justice and gender-equity measures can fairly be dismissed as negligible, but none immediately jumps out as a policy landmark either. A worried Liberal might imagine that Morneau is leaving himself—and the Trudeau government—vulnerable to an underwhelmed yawn of a reaction.

Morneau seems to be counting on two factors to carry him through: the lasting impact of last year’s measures, and an economy that’s showing spring-like signs of fresh life. “In the last seven months, the Canadian economy has created a quarter million new jobs—the largest seven months of job gains Canada has seen in a decade,” he crowed in his budget speech.

Many private-sector economists back up Morneau’s sunny view. TD Bank Group’s latest forecast, for example, points to “strong momentum,” led by an oil and gas sector rebound after hard times, and continued “eye-popping strength” in the Toronto housing market.

Those factors that can hardly be credited to federal government policy. But, as Morneau and Trudeau begin to put in place their long-term strategy for the Canadian economy, short-term buoyancy—no matter its source—could buy them the time they need to prove that Budget 2017’s unspectacular steps set them on a path to something more exciting.