A good weekend in the polls for the Liberals 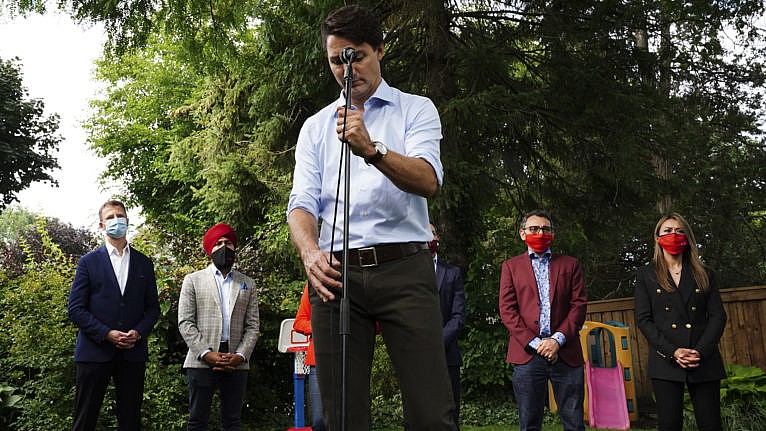 The rolling polls and aggregators all show the Liberals moving into the lead in voter intention over the weekend, a shift of voter intention presumably linked to last week’s debates.

The Legault factor: But with a week to go, the ball is still moving, and it is not entirely clear what is going on in Quebec, where Francois Legault has been repeatedly exhorting Quebecers not to vote for the Liberals, NPD or Greens, and seeming to endorse the Conservatives. In Maclean’s, Fournier writes that we should have a clearer idea of what will happen this week.

What impact could Legault’s words have on voting intentions of Quebecers as we enter the final stretch of this federal campaign? As of this writing, it is still too early to know whether the needle has moved in a conclusive matter for the Conservatives in the province. However, in Mainstreet Research’s daily update (Sunday) morning (using data from two of three days fielded after Thursday night’s English debate), the Bloc Québécois ticked upwards at levels comparable to the 2019 election results. If this increase of support translates into votes next Monday, it could hurt both the Liberals’ and Conservatives’ chances of gaining seats in the province. We will have to wait and see whether other polling firms early this week detect the same trend in favour of Yves-François Blanchet’s team.

Blessing or curse? In the Star, Chantal Hebert writes that it is anything but clear the Legault’s intervention will end up helping the Conservatives.

There is at least one scenario that could see Legault’s intervention resulting in more rather than fewer Liberal gains. In the last two elections, a favourable split in the non-liberal vote between the Conservatives and the Bloc helped the Liberals secure a few more francophone seats. And then there is the issue of whether Legault’s good words are a blessing or a curse for O’Toole outside Quebec. The premier’s popularity may rub off on the Conservatives in Quebec, but his support could have the reverse effect outside the province. In many quarters of the rest of Canada, Legault is a controversial figure.

Debating the debate: Legault, and virtually every elected politician in Quebec, teed off on a question posed to Blanchet during the English language debate. The debate “has been roundly condemned for giving leaders too little time to explain their policies or rebut attacks from rivals, and giving too much time to moderator Shachi Kurl and journalist questioners to interrupt,” writes Joan Bryden for the Canadian Press.  She quotes Elly Alboim, a former CBC parliamentary bureau chief who later helped Liberals prepare for debates. The journalists were “acting on journalistic impulse: What makes news, how do we make them accountable, how do we point out when they’re inconsistent, how do we explain to the audience what their shortcomings are?” But, he said, journalists should not be central players in debates. “They’re about the leaders of the parties holding each other to account and explaining their platforms and appealing to their voters. They don’t need the intermediation of journalists.”

Publishing news: Also over the weekend, the Globe published an excerpt from ‘Indian’ in the Cabinet: Speaking Truth to Power, the new book from Jody Wilson-Raybould, in which she reveals some details about her conversations with Trudeau during the SNC-Lavalin scandal, saying she believes he wanted her to lie.

The Globe had a followup story on Sunday, in which Wilson-Raybould laments that the Liberals have not waived cabinet confidence, which would allow the RCMP to look into the matter more fully.

In Maclean’s Marie-Danielle Smith has an interesting interview with Wilson-Raybould about her book and her life.

Q: If the Prime Minister had asked you to stay, would you have considered it?

A: That’s a good question. I’ve thought about it. I do not believe based on everything that happened to me and the actions that the Prime Minister and other people around him took, whether that be through SNC or other issues that happened throughout my time in government, I don’t believe that I could’ve run under this Prime Minister in 2019.

Not voting Liberal: Former Liberal MP Celina Caesar-Chavannes, who is also disenamoured with Trudeau, plans to vote for Conservative candidate Maleeha Shahid in the Whitby, Ont., riding she once represented as a Liberal, she told Global.

Under the bus: A Toronto candidate who was dropped by the Conservatives over the weekend for anti-Muslim social media posts, says they really weren’t her posts, and she’s gone to the police because of fake posts, the Globe reports.

NDP costing at last: The NDP released the financial details for its campaign promises on Saturday, the last of the three big parties to do so, the Globe reports. The party wants to spend $38.5-billion over five years on pharmacare plan, plus $11-billion for dental coverage. The party would raise $166-billion in new taxes, including increased capital gains tax, corporate taxes and a wealth tax.

Whither the PPC? Stephanie Taylor of the Canadian Press has an interesting story on the rise of the People’s Party in the polls, and what that might mean for the Conservatives. Jeff Ballingall, of Canada Proud, a Conservative third-party advertiser, is warning of the danger to the party: “They want to vote for PPC as a protest vote, they want to get rid of Trudeau, but you can’t have both. You can’t protest and also get rid of Trudeau. It’s not a perfect scenario. It’s a binary choice.”

In case you missed it: The Globe’s Mark MacKinnon has a long, riveting story about the extraordinary effort the paper made to get colleagues out of Afghanistan.