A government of low expectations for Philippe Couillard

Martin Patriquin on the new Quebec Premier and his cabinet picks 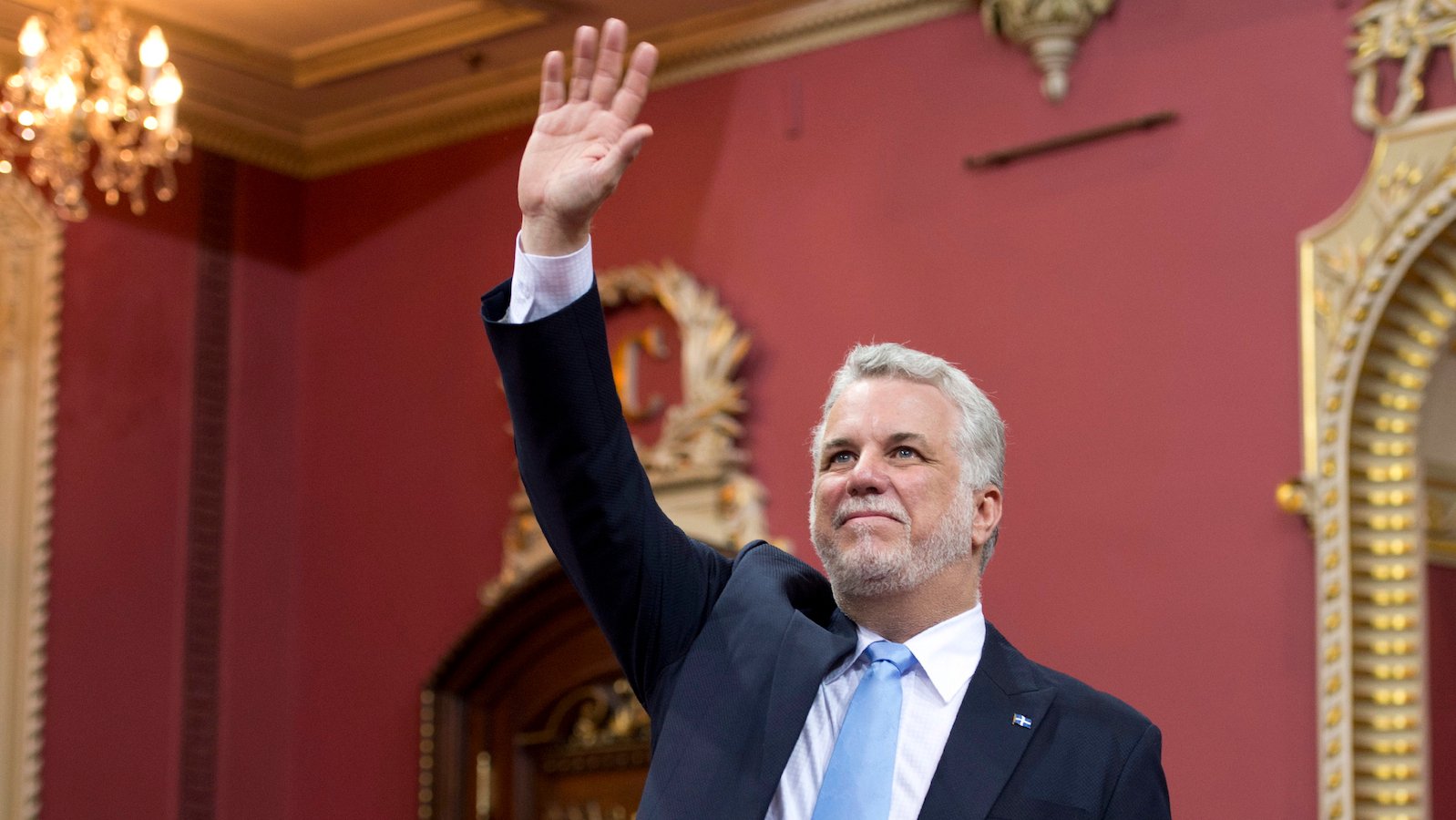 Quebec Premier Philippe Couillard waves as he is sworn in during a ceremony Wednesday, April 23, 2014 at the legislature in Quebec City. THE CANADIAN PRESS/Jacques Boissinot

So said Jean Lapierre on the radio this morning, and the journalist-cum-politician-cum-journalist is right: despite winning a solid majority a little over two weeks ago, the incoming Liberal government of Philippe Couillard isn’t damned by high hopes. Couillard didn’t run a hope-y, change-y campaign. It was easier to just pull over and watch the month-long car crash that was the Parti Québécois campaign. Quebecers, by and large, voted against a referendum than for the Liberal Party of Quebec. To his great credit, I think Couillard understands this.

First, let’s dispense with the pageantry: the Canadian flag was returned to le salon rouge. Couillard and six of his freshly anointed ministers spoke English during their swearings-in. He also allowed cameras into his meeting with Quebec Lieutenant-Governor Pierre Duchesne, in contrast to former PQ Premier Pauline Marois, who preferred to keep this odd little dance with the Queen’s representative under wraps.

Couillard earnestly preached the need for bootstraps-pulling austerity in his final remarks. “We’ve been overspending for a long time,” he said, noting it was “time for difficult decisions.” Couillard seemingly had a difficult time deciding himself: he appointed 26 ministers to his cabinet—two more than the previous PQ government, itself criticized at the time for its largesse. It is the clearest and bulkiest indication of how many backs the incoming premier had to pat after a divisive (by Liberal standards) leadership race in 2013.

A few notes on some of this ministers: Gaetan Barrette is Quebec’s new health minister. A transplanted Liberal star candidate—he ran unsuccessfully for the CAQ in 2012—Barrette was once president of the province’s medical specialists’ association. As such, he negotiated a 42 per cent pay raise for these doctors. Today, he is on the other side of the equation, having punted aside Yves Bolduc, health minister in the Jean Charest government. Bullheaded and testy, “Barrette is unmanageable,” someone once tasked to manage him told me recently. Bolduc moves to education. Though an important ministry, the move is a demotion for the doctor, who clearly relished the health file in Charest’s government.

In picking Jean-Marc Fournier for intergovernmental affairs, Couillard managed to find someone as resolutely federalist as he. Fournier once worked with Prime Minister Paul Martin and then Michael Ignatieff. He is a clear counterpoint to Benoit Pelletier, Charest’s former intergovernmental affairs minister, a Quebec-first federalist. Fournier will have the honour of being the point man in negotiations with the federal government, should Couillard indulge in his flight of fancy and attempt a reopening of constitutional negotiations between Quebec and Ottawa. Lucky him.

Couillard didn’t have much choice but to appoint Sam Hamad to cabinet. The longtime Quebec City-area MNA has close ties with Régis Labeaume, Quebec City’s über-popular, cheerfully Napoleonic mayor. An engineer by trade, Hamad was director of business development for the engineering firm Roche, whose headquarters were recently raided by the province’s anti-corruption task force. Safe to say that Couillard’s entourage must have insanely good intelligence that Hamad won’t be implicated.

Lise Thériault is vice-premier and, most interestingly, public security minister. As labour minister under Jean Charest, Thériault removed the right of unions to select the labour pool on the province’s construction sites. It earned her the ire of the FTQ, Quebec’s largest union federation, among others. Thériault will overhaul the selection process of the head of the Sûreté du Québec, the province’s police force. It’s currently selected by the premier’s office and the public security minister, which critics say makes the position nakedly political.

Kathleen Weil will be minister of “immigration, diversity and inclusion.” The name itself is an apparent middle finger to the former PQ government, which pushed a so-called Quebec values charter that sought to remove religious accoutrements from the heads and bodies of Quebec’s public-sector employees. Weil, an early Couillard supporter, and newly ensconced justice minister Stephanie Vallée will likely work together to bring about legislation on the “reasonable accommodations” file—and deflate a major PQ electoral cudgel in the process.

In his closing remarks, Couillard said Quebec is too old, too indebted and too unemployed for its own good. Remedying all of this will be the government’s economic team: treasury minister Martin Coiteux, economic development minister Jacques Daoust and finance minister Carlos Leitao.

My prediction: Couillard and these three horsemen will load all the government’s austerity measures, electorally unpopular as they are, into the front end of the government’s four-year mandate. Expect Couillard’s popularity to nosedive early on as a result, and for the resurgent CAQ (not the despondent PQ, the province’s Official Opposition) to complain Liberal knives aren’t cutting deep enough. With sovereignty about as popular as herpes and bad breath, and having been trounced in an election it seemingly couldn’t lose, the PQ has its own demons to contend with in the coming months and years.