A new 338Canada/Maclean’s projection: Tories in the lead

Philippe J. Fournier: After a flurry of new polls the latest electoral model sees the Conservatives well positioned and gaining ground in Quebec 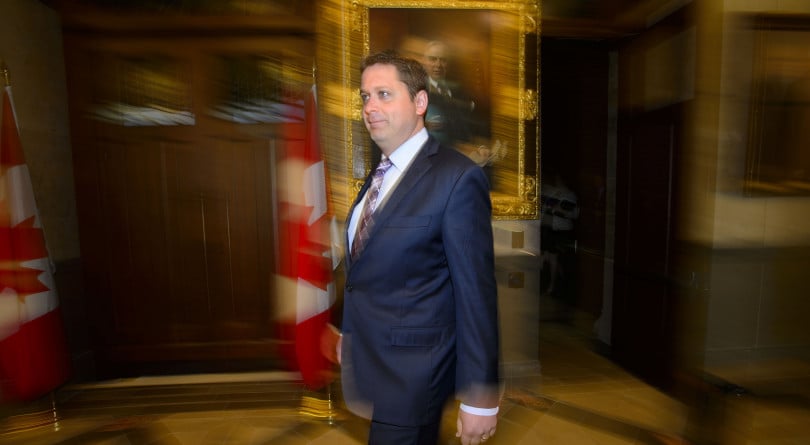 Scheer makes his way to a media availability in the foyer of the House of Commons in Ottawa on June 10, 2019 (THE CANADIAN PRESS/Sean Kilpatrick)

The House of Commons will soon adjourn for a summer break that will last until the writ is drawn up in late August or early September. Unless some major and unexpected event occurs, Canadians will head to the polls on Oct. 21 to choose the MPs of the 43rd federal legislature.

There were six new federal polls published in the past seven days. Early last week, Campaign Research (CR), Nanos Research, the Angus Reid Institute (ARI) and Forum Research all released their most recent numbers. Aside from ARI which had the Conservatives with a comfortable 11-point lead over the Liberals, all of these polls showed a fairly close race with the CPC’s lead in the three to four point range.

Then on Friday came two new polls from Ipsos/Global News and Léger/CP whose overall numbers looked quite similar at first (Conservatives leading by 6 and 9 points, respectively), but whose regional breakdowns were all over the place.

Although there are some major disagreements between these polls, let us begin with what they have in common: The Conservatives are still holding onto their lead and should be considered the favourite as we enter the summer.

Here are the federal polls since the New Year: 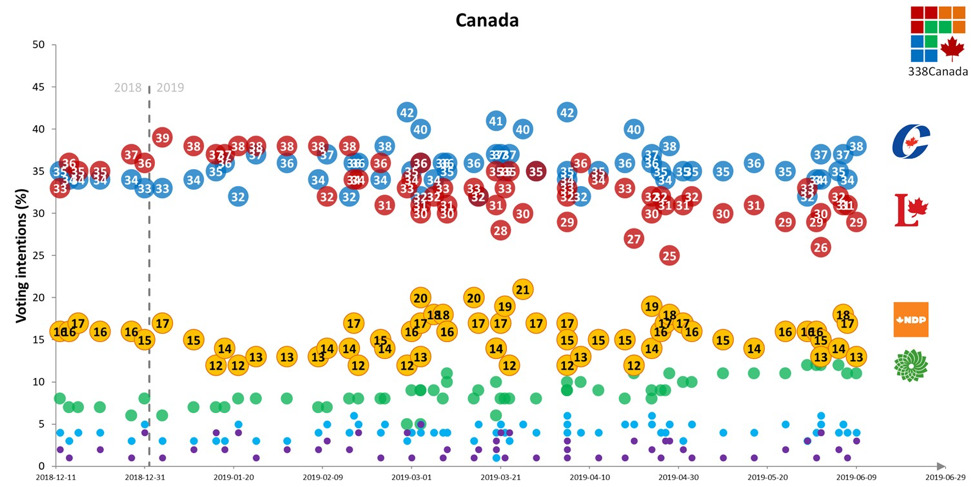 [The complete list of federal polls is available here.]

As stated above, the regional numbers from last week’s polls have had major disagreements among them, and nowhere more than in Quebec. From last week’s polls only, numbers in Quebec have ranged from Conservatives +2 (Léger and Angus Reid) to Liberals +13 (Forum and Ipsos) to Liberals +18 (Nanos). Even though sub-samples are naturally smaller and thus have higher uncertainty, this wide spectrum of gaps between the two main parties indicates there is still a lot of noise in the data.

The Conservative Party of Canada (CPC) leads the way with an average of 35.5 per cent of support nationally. Unsurprisingly, the CPC is leading in the Western Provinces, but has also recently gained ground in Quebec and the Atlantic provinces. 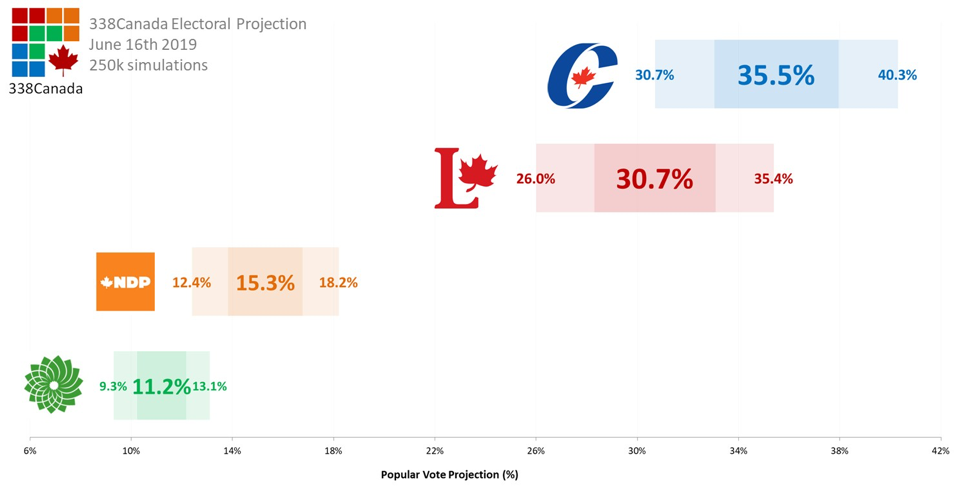 The Liberal Party sits in second place with an average support of 30.7 per cent. The Liberals remain competitive in Ontario, Quebec and the Atlantic Provinces. In the West, the Liberals could hold on to their districts in Winnipeg and in B.C.’s Lower Mainland.

Maxime Bernier’s PPC is at 2.2 per cent.

Let’s compare this popular vote projection to the polls of the past week: 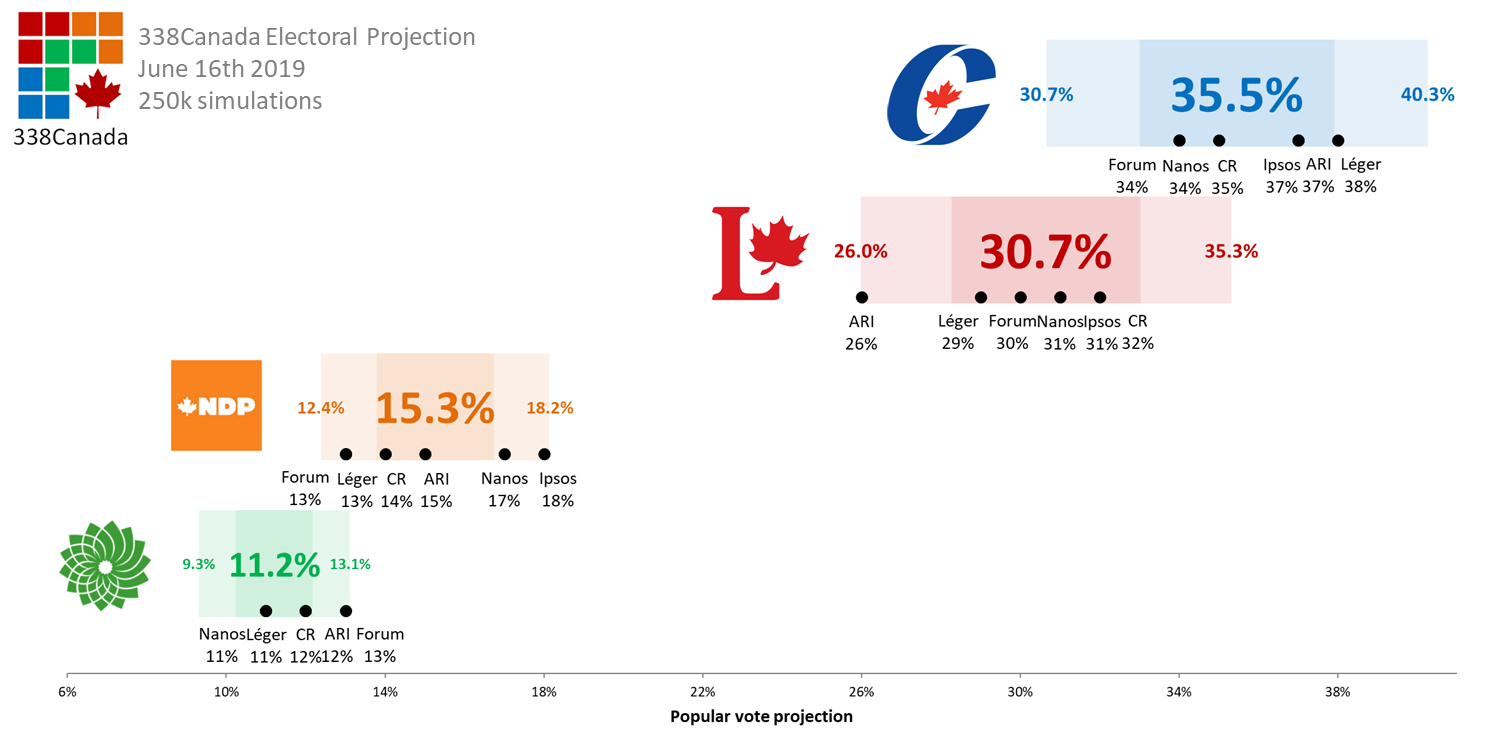 Since there were diverging numbers in last week’s polls, the confidence intervals have widened significantly, especially for the Liberals and Conservatives. Naturally, wider ranges of popular vote also mean wider ranges of seat projections.

The Conservative Party leads the seat projection with an average of 164* seats per simulation, just short of the 170-seat majority threshold. 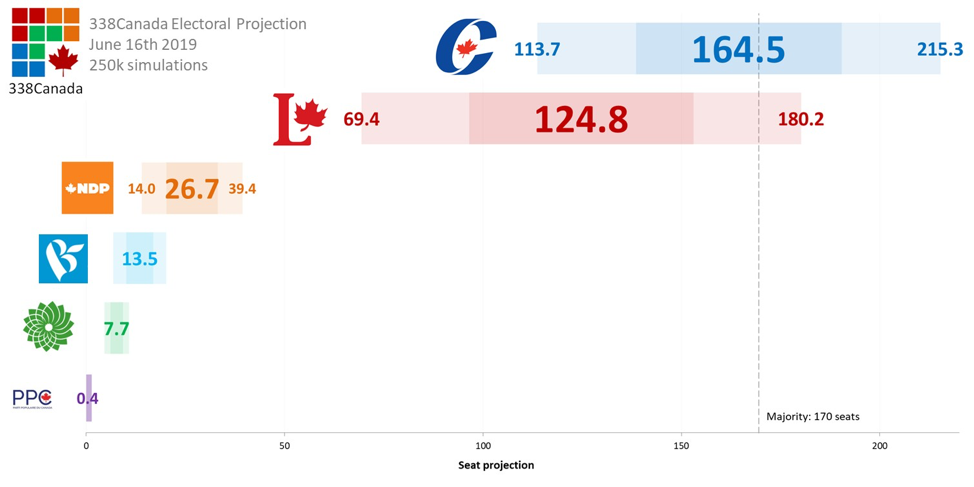 The Liberals win an average of 125 seats, about 90 of which are in Quebec and Ontario. The current spectrum of seat totals is especially wide in Quebec, because both the ARI and Léger polls have the CPC leading in the province outside of Montreal. Should these numbers be accurate, dozens of Quebec seats currently projected leaning LPC could become up for grabs the for CPC and the Bloc Québécois.

Here are the seat probability densities for the Conservatives and Liberals: 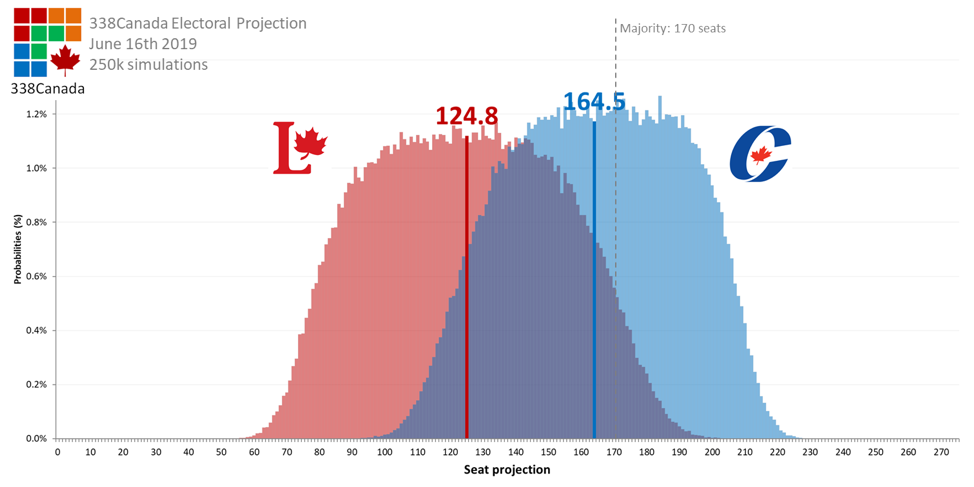 The NDP‘s average is at 27 seats, half of which are in located Ontario: 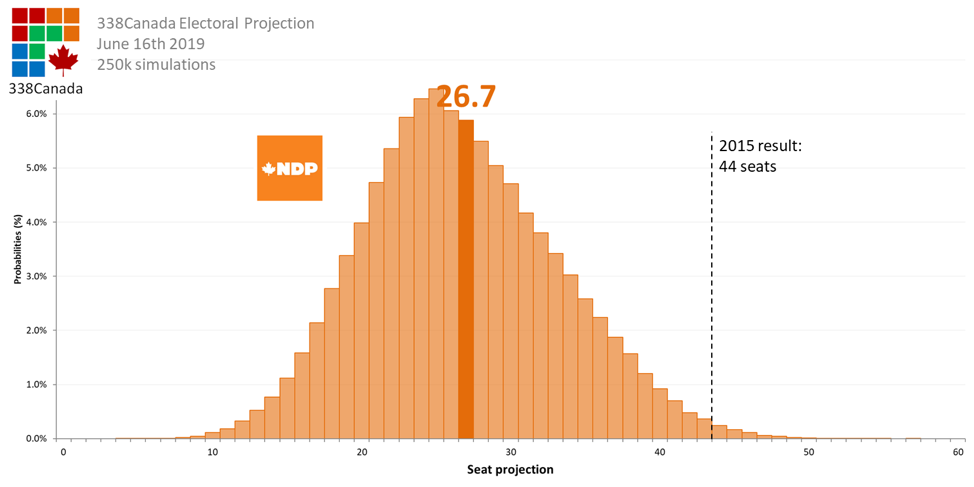 The Bloc Québécois‘ average ticks up to 13.5 seats with an average of 19.1 per cent support in Quebec: 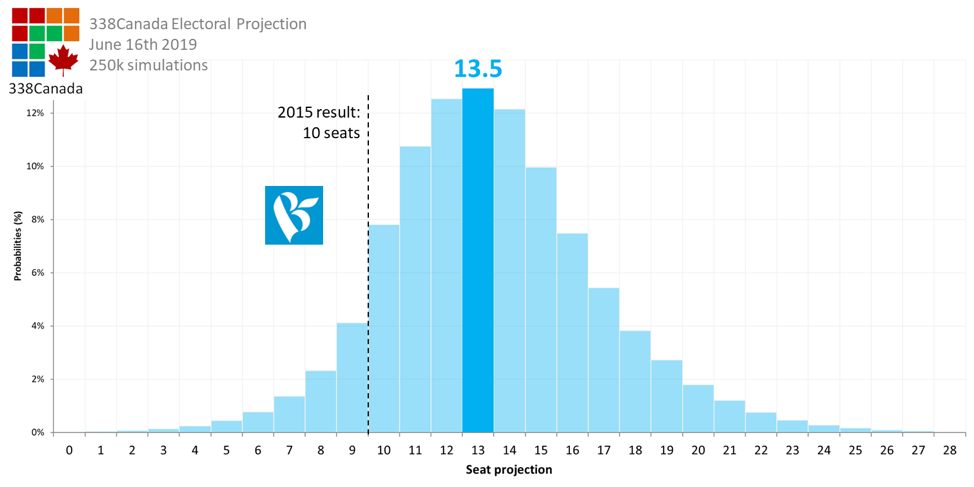 Finally, the Green Party of Canada climbs again with an average of 7.7 seats, including a near complete sweep of Vancouver Island: 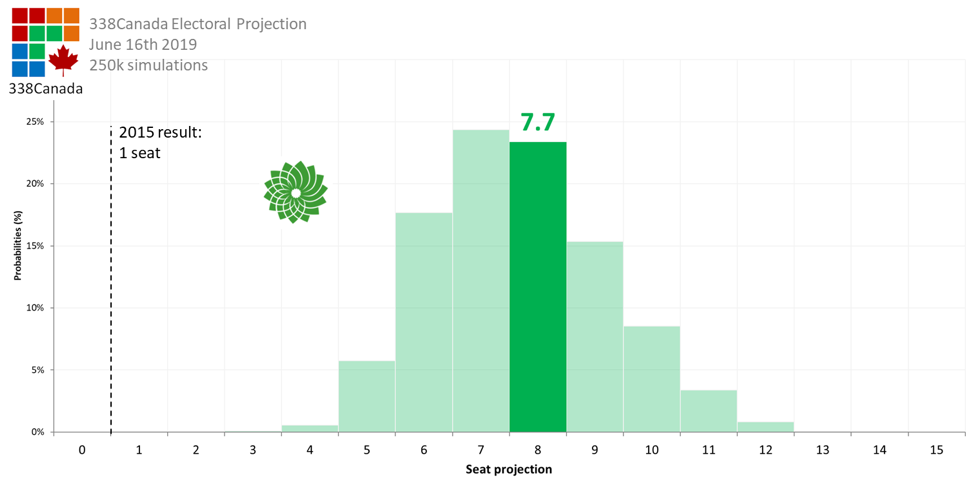 According to this week’s numbers, the Conservatives win the most seats in about three quarters of simulations (from a total of 250,000 simulations performed by the model). The CPC wins a majority of seats in 45 per cent of simulations. 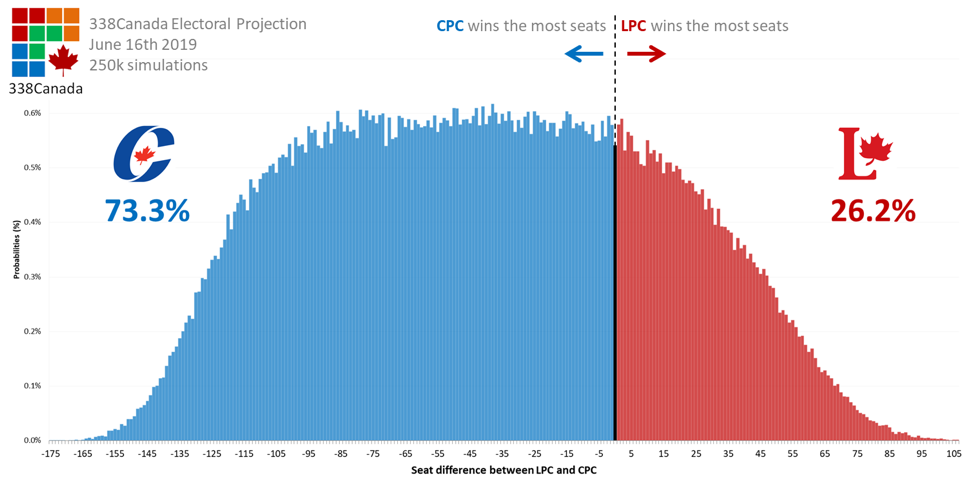 Regular readers of 338 projections will notice that this probability density curve above has a flat “plateau” in its middle—this is due to the increased uncertainty in the regional seat projection. Should polls in the next weeks converge to more consistent values, the curve above would regain its expected Gaussian shape.

Trying to predict the outcome of October’s federal election, scientifically and empirically, is a fool’s game at the moment. Despite Ipsos CEO’s assertion that “the Liberals are running out of time”, we are still five months away from the general election which is, as the saying goes, an eternity in politics.

Four months ago, just before the SNC-Lavalin story broke in the Globe and Mail, the Liberals were projected to win just over 180 seats.

Four months before the 2015 election, Thomas Mulcair was still in the running to replace Stephen Harper.

Four months before the 2011 election, Michael Ignatieff was only a few points behind Harper, with Jack Layton a distant third in the polls.

That the Conservatives are in the lead entering the summer is the only conclusion we can reasonably come to according to the available data. Past federal elections have proven that campaigns still very much matter.